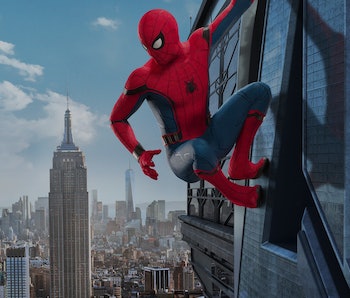 This planet is covered in eight-legged creeps. Scientists estimate that if all the spiders on the planet were placed on one very large scale, they’d collectively weigh about 25 million tons. That’s unfortunate for people with arachnophobia, one of the most common fears shared by humans. However, while an arachnophobe can’t avoid spiders forever, they can at least treat their fear — perhaps, a new study shows, with the help of some superheroes.

In a study out last week in Frontiers in Psychiatry, a team of Israeli scientists present a modest proposal wrought from their own love of Marvel movies. Many people, they acknowledge, express phobia symptoms when they see creepy crawlers. Some people, in turn, treat these phobias with exposure therapy — the gradual exposure to phobic stimuli in different, safe situations. What hasn’t been tested is how these people are affected when they watch superhero movies, specifically superhero movies with a lot of bugs.

Ant-Man and Spider-Man are two such bug heroes. Scott Lang can shrink himself to the size of an ant, communicate with them, and tell them what to do. Meanwhile, Peter Parker was bitten by a radioactive spider, imbuing him with powers.

In this study, 424 people recruited online because of their phobia of spiders or ants were divided into four groups. Two of these groups were the “intervention groups” and the other two control. While the control groups were shown a clip of either the Marvel opening credits or a calm meadow, the others were shown movie clips related to their fears.

People with a phobia of ants, called myrmecophobia, were shown the clip below, in which Ant-Man (Scott Lang) is surrounded by his namesake.

Meanwhile, arachnophobes were shown this clip from Spider-Man 2, in which the camera pans up to a foreboding spider.

Although these clips are very short, they still made a big impact on their viewers. After they viewed the clips, the intervention subjects reported that the bug phobias were reduced by 20 percent relative to their pre-viewing score. The control groups, meanwhile, didn’t experience any relief from their phobia.

They acknowledge that this study is just one small step towards a greater understanding of how to lessen fear. The individuals here seemed to experience relief, and it’s currently unknown how long the effects will last. But the team still categorizes this as a “very high benefit-to-cost ratio” and a form of exposure therapy that ignites “potent effects.”

“As such, its integration into CBT (cognitive behavioral therapy) protocols may warrant further testing and consideration, especially for clients who in-vivo exposure may be difficult,” the researchers write. “The current results open a novel theoretical direction, concerning potential effects of a positive exposure albeit in a fantasy context.”

Fear of insects, mainly spiders, is considered one of the most common insect phobias. However, to date, no conducted studies have examined the effects of phobic stimuli exposure (spiders/ants) within the positive context of Marvel superheroes movies, such as “Spiderman” or “Antman”. A convenience sample of 424 participants divided into four groups watched different clips. Two intervention groups (Spiderman/Antman) and two control groups (Marvel opening/natural scene) were measured twice (pre-post intervention). The measures comprised an online survey assessing socio-demographic variables, familiarity with Marvel movies, comics and phobic symptoms. Reduction in phobic symptoms was significant in the Spiderman and Antman groups in comparison to the control groups. Seven second exposure to insect-specific stimuli within a positive context, reduces the level of phobic symptoms. Incorporating exposure to short scenes from Marvel Cinematic Universe within a therapeutic protocol for such phobias may be robustly efficacious and enhance cooperation and motivation by rendering the therapy as less stigmatic.