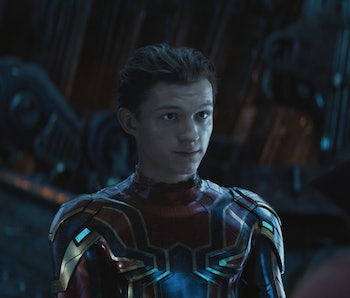 Is it really a spoiler to say that after the action of Avengers: Endgame wraps up, Peter Parker swings back into his regular life as Spider-Man while still going to a Queens high school? Probably, but because Marvel Studios has already released trailers for Spider-Man: Far From Home, they already spoiled that one for us all.

So how exactly do these two movies fit together?

Endgame hits theaters this weekend, and we won’t tell you anything about how the surviving heroes try to fight Thanos and undo the devastating genocide he committed in Avengers: Infinity War. We also won’t talk about the film’s thrilling conclusion. We’re more than happy to remind you, however, of the public knowledge about how Endgame and the final movie in Phrase 3, Spider-Man: Far From Home, fit together in the Marvel Cinematic Universe.

Earlier this week, Marvel Studios president Kevin Feige explained at a Shanghai press event that Far From Home (and not Endgame) marked the official end of Marvel’s Phase 3. We also already know exactly when Far From Home takes place.

Back in June 2017, Sony executive Amy Pascal told Fandom, “we are starting now the next one which will start a few minutes after Avengers 4 wraps as a story.” Long before these two films had publicly announced titles, Pascal meant that pre-production on Spider-Man: Far From Home was beginning, and the plan was to have that movie start “a few minutes” after the curtain closes on Avengers: Endgame.

That may have changed in the last two years, but we might as well assume that Far From Home takes place in the weeks and perhaps months following Endgame. Also, remember that Spider-Man: Homecoming technically started shortly after The Avengers and then jolted ahead about five years for the bulk of the story. That might happen again.

Plenty of Marvel movies in recent memory begin with a flashback. Captain Marvel, Ant-Man and the Wasp, and Black Panther each open on a scene that take place years before the main story.

In April 2018, Feige told IGN: “What is it like to try to go back to a normal life after what happens in [Infinity War]? Not to mention what happens in the next [Avengers] movie.”

That’s exactly what Peter Parker will try to do when he goes on a European vacation with his friends, but it won’t be so easy for him when Nick Fury drags him into a dramatic confrontation with some elemental monsters alongside Mysterio.

Avengers: Endgame is now in theaters, and Spider-Man: Far From Home will be released July 2, 2019.