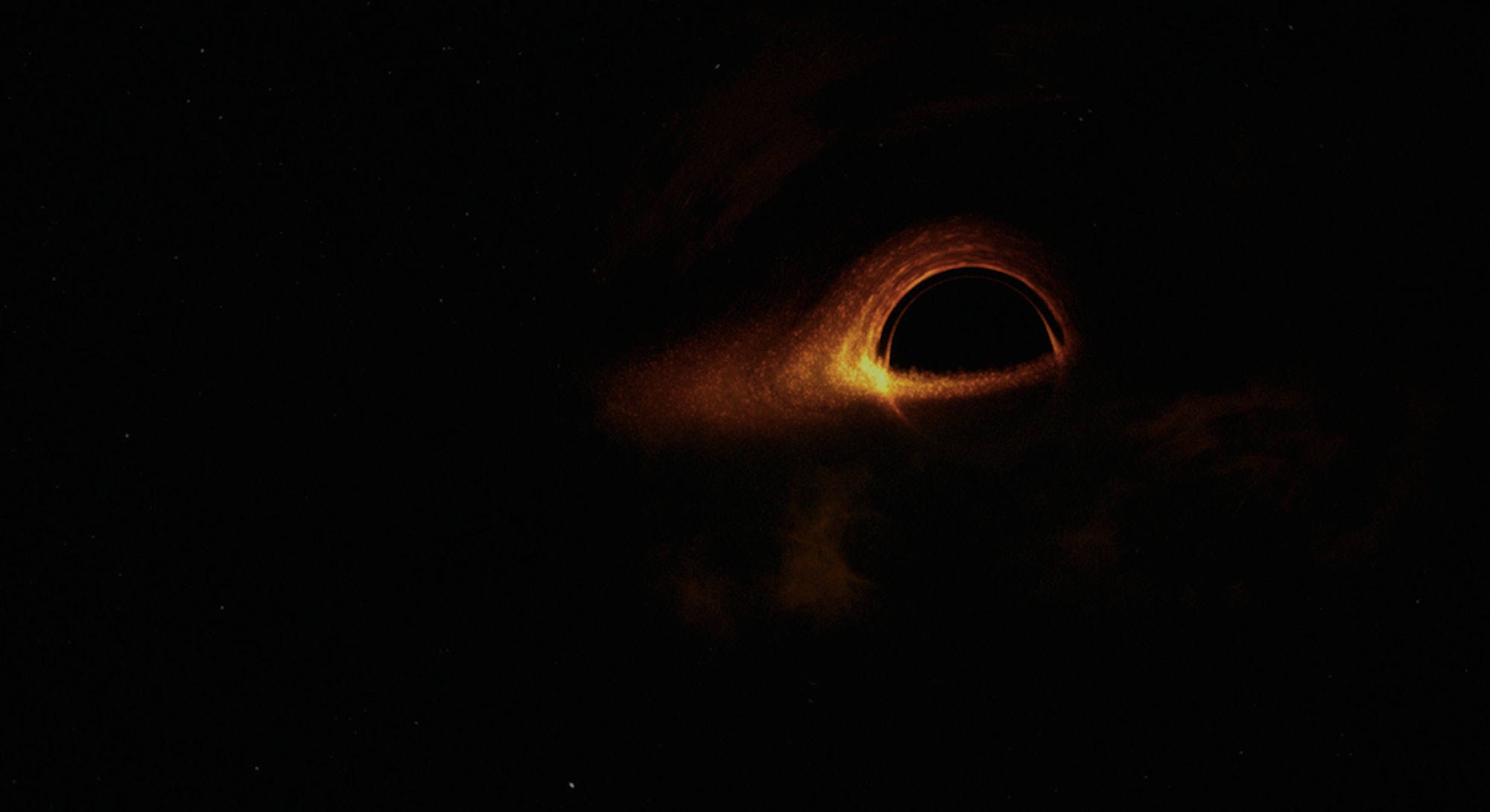 Of course, the image cobbled together from staggering amounts of Event Horizon Telescope data was very pixelated compared to High Life’s sharp, spinning voids, but the resemblance was undeniable.

Spoilers for High Life below.

“The black hole, it looks like ours,” said Denis of the photo in an interview with Hyperallergic. Though fans of the film also noticed the similarity, Aurélien Barrau, Ph.D., the astrophysicist who consulted with Denis on the film to get the black holes right, would hardly call it surprising.

“Well, of course that was very interesting, very fascinating, and to some extent very moving,” he tells Inverse regarding the new photo.

“But we have to be honest, from a scientific viewpoint, this is probably not a revolution because it basically looks like what was expected.”

Barrau, like the rest of the world, had never seen a photo of a black hole before the release of the historic M87 photograph, but he’d seen them many times before in the equations and theories that preceded it. The film additionally reveals how the Laboratory of Subatomic Physics and Cosmology professor anticipates how we might collect energy from black holes, how their sheer gravitational force may brutally obliterate us, and how long we may survive in their mouths should we be so unlucky to get swallowed up.

Getting the Black Hole Right

Barrau makes one thing clear: The film is not so much about black holes as it is about what black holes represent, an end point on a journey from which there is no return. As such, he doesn’t pretend that the two black holes featured in the movie don’t benefit from some artistic license. But a good deal of astrophysics knowledge went into making them look right.

“We tried to have rules — not to do something completely crazy,” he says.

The first black hole is small and black, bending the glow of the celestial bodies that surround it into a rapidly spinning string, like the lights of an out-of-control Ferris wheel. On his blog, he explains that this is a real effect of general relativity, because space is curved by the presence of the black hole, and as the ship moves around it, the images of the celestial bodies begin to scroll.

“Even if we had no picture, we were completely able, even five, or 10, or more years ago, to calculate what a black hole should look like,” he says. “If you want to make a movie, you have the map of the stars, you have the general relativity equation, and it is not difficult to calculate how the maps would be distorted by the black hole.”

This image shows the galaxy Messier 87, where the black hole in the historic photo resides.

The doomed crew of the spaceship — prisoners destined to be sucked into a large black hole at the end of their journey — are tasked with determining whether they can harvest limitless energy from a rotating black hole, which is predicted by the equations of the Penrose Mechanism. Their trajectory takes them past a small, tightly spinning black hole, which the main ship sends a small capsule to investigate.

To extract that energy, the capsule must make it into the ergosphere — a region just outside a rotating black hole’s event horizon. But when the capsule is unable to insert itself into the desired orbit, it falls inside the black hole and horror ensues.

“Because of tidal forces, the lady inside the capsule is just killed because of this extreme gravitational field,” says Barrau.

The scene is horrific. Inside the rickety capsule, the prisoner screams as her body is bent out of shape. It isn’t passing the event horizon that does it — the horizon is immaterial, says Barrau, so crossing it is no problem — it’s the intense gravitational field that rips her apart. In a black hole, there are immense differences in gravity that vary over very short distances. In the same way that the difference in gravity between the moon and Earth distort our planet to create the ocean’s tides, the tidal forces of a black hole would distort a person’s body — a term some call “spaghettification.”

With a shriek and a sickening splat, the prisoner’s head explodes onto the glass of her spacesuit.

A second, much bigger black hole awaits the crew at the end of the journey. By that point, it’s just Monte (Robert Pattinson) and his now-grown-up daughter, Willow (Jessie Ross), who face the void. Barrau says this is actually a less brutal situation.

The pair enter a capsule and travel into the mouth of the black hole. Their journey is much more placid than that of the spaghettified prisoner. “They are not killed because, in this case, the gravitational field is weaker and, therefore, they can spend some time inside the black hole,” says Barrau. It is possible, he explains, to penetrate a large black hole and not be ripped apart by tidal forces.

Once inside, the “sky” of the black hole appears to collapse on the pair, and a thin band of yellow light is all that remains. This, too, says Barrau, is what is predicted by the effects of special relativity and general relativity.

What happens to them beyond that is anyone’s guess.

Black Holes in a Post-Photo World

Despite the fact that the M87 photo has confirmed so many of our predictions about black holes, there’s still a lot — perhaps an infinite amount — that we don’t know.

“Black holes are really fascinating objects because they probably are the best image we can have about the unknown,” says Barrau. The laws of physics dictate that for every physical process, the reverse process must exist. “In principle, physics allows you to undo what was done. The only known exception to this is the formation of a black hole.”

“When you make a black hole, there is no physical process known to unmake or destroy a black hole. The black hole cannot be destroyed.”

Understanding black holes — what they are, how they form, and how, if ever, they might be observed in full — requires an understanding of physics that we do not have yet. Two theories guide our understanding of the universe: general relativity and quantum mechanics. “But when you study the interior of black holes,” Barrau says, “you have to use both quantum mechanics and general relativity, and it is something that you don’t know — we don’t yet have a theory of quantum gravity.” That’s something he’s working on at the University of Grenoble Alpes.

Sci-fi films like High Life and other black hole epics like Interstellar take a lot of liberties with astrophysical theory, but both ultimately probe the same question: What happens on the other side of a black hole?

“Understanding the interior of black holes or understanding the origin of the universe are probably the same question,” says Barrau, “so it is, of course, very, very exciting and motivating.”