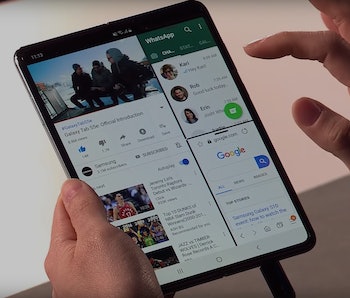 The rollout of Samsung’s $1,980 Galaxy Fold hit a bit of a snag on Wednesday after several influential tech reviewers reported that their review units had already broken within days of receiving them. But despite the flurry of broken devices that flooded social media on Wednesday, each and every one of the 18 pre-order customers Inverse was able to track down said they plan to press forward with their purchases.

Galaxy Folds have been available for pre-order since April 11 and even after Wednesday’s events, Samsung announced they will still release the devices on April 26. Reservations went quickly: The Fold’s landing page currently states that pre-orders are no longer available.

This seems less likely to change than you’d think. All 18 of the pre-order customers we were able to find through a mix of forums and social media posts indicated either publicly or in an interview with Inverse that their enthusiasm for the device remains entirely unshaken. Despite the nearly $2,000 price tag, not one of them said they had put in for a refund or cancelled their order. Instead, they all plan to rely on Samsung’s insurance and return policies if something goes awry.

“I’m not terribly worried about it,” read one emblematic post from Redditor /u/Waternut13134. “I have 14 days to return the phone, in those 14 days I will heavily use the phone to try and seek out any issues. After that I will have insurance for the phone that will cover any other issues with the device. I knew this was a first-[generation] product and I knew what I was getting my self into including possible hardware defects.”

Just like users who sign up to test beta software on their iPhones or Android devices, buying a Galaxy Fold is like participating in a (very expensive) trial run for a next-generation smartphone design. To allay potential concerns, Samsung offered users insurance for about $20 a month that covers breakages and even accidents. It was a wise failsafe to put in place, particularly in light of such a pricy and fragile product.

But, while they’re not foregoing the insurance, many Fold fans were entirely unbothered by Wednesday’s events, and even blamed reckless reviewers for the careless user errors. To be sure, Bloomberg’s Mark Gurman and the famous YouTube reviewer Marques Brownlee both copped to peeling off the thin, plastic film that is apparently a crucial part of the Fold’s display. But it’s also entirely understandable that they were all under the impression this was a removable screen protector.

“Of the issues reported, around half of them were a result of the user damaging the device by removing the polymer layer,” said Daniel, who goes by /u/Cic3ro on Reddit.

One Redditor told Inverse that they were relieved that Gurman and Brownlee accidentally ripped the film from their Folds. This way, Samsung has gotten extra warning and extra time to shore up its messaging, and ensure the packaging makes it crystal clear that this extra layer should not be removed from the internal display.

After all, this layer seemed bound to cause confusion. Most new phones come with a plastic sticker attached to their screen, and Redditor /u/chickdigger802 admitted that he, too, would have rushed to peel off the Fold’s protective film.

“Happy that the whole ‘protective film’ issue was discovered ahead of release,” they said. “I can totally see myself pull[ing] that screen protector off because that’s what I have the habit of doing with buying phones.”

Other reviewers like The Verge’s Executive Editor Dieter Bohn and CNBC Tech Editor Steve Kovach did not remove the plastic layer, yet their Folds still suffered a similar fate to Gurman’s and Brownlee’s. These models simply appear to have broken. And yet, the only thing pre-orderers found strange was that all of the reviewers reporting issues with the Fold are based in the United States. That lead some of them to believe that there might be an issue the U.S. shipment.

“It is expensive and a bit ridiculous so many devices have failed given the small number of people who have them,” said Derek, who goes by /u/derektheninjaz on Reddit. “On the other hand, I find it strange that only USA units are having this issue.”

Samsung told Inverse in a statement on Wednesday that they would “ thoroughly inspect these units in person to determine the cause of the matter,” which might reveal a more serious underlying issue with the Folds makes pre-order customers more wary. But until then, the happy few customers who have already committed to paying close to $2,000 for an experimental device don’t seem concerned about a few issues, they just want to play with it.

To be sure, the users Inverse was able to track down were likely self-selecting. If you join Reddit forums for prospective Galaxy Fold owners, and take to social media to show off your order confirmation, it’s safe to say you’re among the most enthusiastic buyers.

But it was still striking to find so little evidence of buyer’s remorse. If you have put in a pre-order, regardless of whether you are now having second thoughts, we’d love to hear from you.