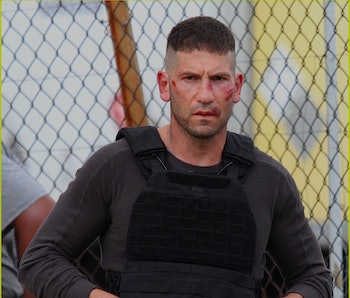 Earlier this summer, Jon Bernthal was cast to play the Punisher in Netflix’s Daredevil. Bernthal was widely acknowledge to be a terrific choice to play the psychotic moralist because he seems kind of angry all the time; even when he’s playing a lawyer in Show Me a Hero, he seems ready to break out a shotgun or two.

Now we have our first set photos of Bernthal as the Marvel anti-hero, courtesy of JustJared. He’s all cut up and beating up bad guys while wearing a bulletproof vest. His famous skull t-shirt is notably absent, which fits into the show’s preference for realism over comic book fantasy.

The takeaway: Bernthal might live up to the hype.

More like this
Culture
Sep. 27, 2022
8 thrilling sci-fi movies and shows new on HBO Max and Netflix in October 2022
By Robin Bea
Entertainment
Oct. 3, 2022
Why is House of the Dragon so dark? The real reason has nothing to do with your screen
By Dais Johnston
Entertainment
Sep. 30, 2022
Rings of Power just changed Tolkien’s Lord of the Rings canon for the better
By Alex Welch
Related Tags
Share: