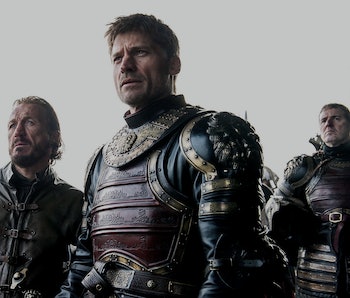 Jamie and Cersei Lannister’s forbidden love for each other is what kicked everything off in Game of Thrones. Their love and devotion ran so deep, it was hard to imagine Jamie loving anyone but Cersei. While visiting Dorne in Season 5, Jamie tells Bron that he’d like to die in the arms of the woman he loves, but what if the woman he’s referring to isn’t Cersei? An extremely convincing Game of Thrones Season 8 theory could reveal how “the Kingslayer” will die.

Game of Thrones spoilers ahead.

Game of Thrones Season 7 ended with Jamie essentially walking away from Cersei, a bit perturbed with regards to her plans to betray her promise to help in the fight against the White Walkers. Redditor u/FoundWaldo_meh believes that Jamie will go off to help fight the wights and that he’ll die in the arms of Brienne of Tarth after performing a heroic act of redemption. “Jamie does love Brienne (romantic or not) so this would be an interesting twist,” they write.

This all seems extremely reasonable. It’s basically been confirmed that Jaime will head north and join up with the good guys to fight against the Night King. Also, this is Game of Thrones so there’s a pretty good chance he’ll die, and Brienne will almost certainly be there as well.

Jamie’s journey has been a long and fascinating one. He started Game of Thrones as more of a villain, the man everyone loved to despise, before his arc turned to one of redemption. Now, he’s become a character fans root for.

Brienne was, in part, a big reason why Jamie began to look more and more like a good person. Brienne saw the best in him, even when he was showcasing the worst of himself. She was there for him when he lost his hand and allowed him to be vulnerable.

Ever since then, Jamie has grown to love Brienne, even while he still pledged loyalty to Cersei. Now that Jamie will potentially spend a long period of time away from Cersei and fight alongside Brienne in the war against the White Walkers, the theory holds more merit and could very well come to fruition. The theory further suggests that Jamie might die while “getting Bran to safety,” which would be very poetic considering the pilot episode ended with Jamie throwing Bran out of a tower window.

Brienne would then ensure Jamie’s legacy as a hero would remain in tact. Following her return to King’s Landing, she might “update Jamie’s chapter in the Kingsguard book with his heroic deeds.” Meanwhile, Jamie’s portrayer, Nikolaj Coster-Waldau, believes Brienne and Tormund would actually make a good couple (but then Brienne doesn’t seem as interested or invested in Tormund the way she is in Jamie).

While another theory proposed that Jamie has a different role to play (that he’d be the one to kill the Night King), saving Bran and dying in the arms of Brienne sounds like a far more realistic ending to his story. Then again, why not both?