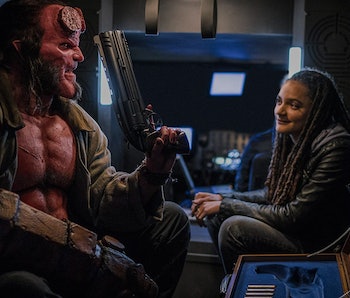 The lore of director Neil Marshall’s interpretation of Hellboy, the big red demon comic book superhero, deviates quite far from the two Guillermo del Toro movies that made the character popular in the early 2000s. Fans will recognize only a few characters from Hellboy (2004) and Hellboy II: The Golden Army (2008) this time around — but the film’s final scenes tease someone who will be incredibly familiar to most people.

On behalf of the Bureau for Paranormal Research and Defense, Hellboy (David Harbour) works with his adoptive “father” Trevor Bruttenholm (Ian McShane) investigating and combatting paranormal threats to mankind. When a nasty pig man helps resurrect the Blood Queen Nimue (Milla Jovovich), Hellboy teams up with an old friend and a new ally to defeat her, discovering the truth about where he comes from in the process.

Even for people that closely remember the other Hellboy movies, some of the revelations we learn in this one are pretty shocking.

How Is Hellboy Related to King Arthur?

Rather late in Hellboy, one of Nimue’s subjects sends Hellboy looking for a wizard deep inside a cave who obviously turns out to be Merlin, who in turn tries to give Hellboy the Excalibur sword. It’s the only thing that can harm Nimue, and Hellboy is the only being that can possibly wield it. Why?

Hellboy’s true name is Anung Un Rama, and he’s the offspring of a demon named Azzael and a human witch, Sarah Hughes, who was descended from King Arthur via the bastard son he had with his half-sister Morgan Le Fey (also a witch). Not only is Hellboy of kingly blood and technically the true ruler of England, but he’s also got some witchy magical blood. That’s not even factoring in his demon side, which also includes the Right Hand of Doom, a kind of superweapon that originally comes from a lesser deity of a sort.

That explains why Hellboy is so incredibly powerful and durable.

Wielding Excalibur transforms Hellboy into his full demon form, complete with fully grown horns and a crown of flame. Under normal circumstances, he could’ve used his powers to literally unleash hell on Earth. Instead, he used them to defeat Nimue and toss her severed head down into hell.

Who Does Hellboy Tease in Siberia?

Hellboy’s epilogue takes Red and his two teammates — psychic Alice Monaghan (Sasha Lane) and werejaguar Ben Daimio (Daniel Dae Kim) — on a mission to Siberia where they fight members of the Atlantis Society. After taking down dozens of men in hazmat suits, they find a tank labeled “ichthyosapien.” “Icthyo” is the Greek root for “fish” and “sapien” of course refers to “human” (hence “homosapien”). The last image we see is of a webbed hand reached up to touch the glass tank.

No, this isn’t some kind of Shape of Water crossover. This character is Abraham Sapien, a much more intelligent but similar creature that fans should remember from the other Hellboy movies. He’s a humanoid amphibious man that can breathe underwater, has a genius-level intellect, and he even has telepathic and psychometric skills as well. We don’t see any of this in the scene from Hellboy, but assuming there’s a sequel, we’re bound to see lots of Abe.