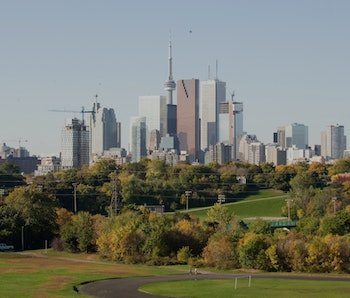 Sam Eifling: Yasmin, I expect neither of us was surprised to see Toronto and Vancouver on this list of The Economist’s most “livable” cities — for whatever reason, these rankings love Canada — but we were both wondering how Calgary made the top six. Seeing urban Canada on these rankings year after year with the likes of Vienna and Melbourne and Zurich and Copenhagen I think feeds the vague exoticism Americans hold for Canada. We Yanks know in our bones that we’re better than Canada … but we’re also fully capable of acknowledging that Canadian cities outclass most American cities. I’ve lived in Vancouver and Toronto and found them perfectly delightful, but no more extraordinary than Seattle and Chicago. I’m not sure why you Canucks keep blowing America out in these rankings. (Not that it’s a competition or anything. But it’s a competition.)

Yasmin Tayag: It’s funny you bring up Canada’s exoticism, Sam. To me, part of Canada’s appeal is that it’s so unexotic — there’s a very British practicality in the way we function — and that’s what makes these cities livable. Toronto, Vancouver, and Calgary are on this list because they take that practicality and leverage it with more glamorous elements. In my hometown, Toronto, for example, the speed of life is totally manageable, as I’m sure it also is in Seattle and Chicago, but what we do is make sure it’s never boring. Our cool (arguably the coolest) music scene, vibrant food culture, and booming business sector make sure of that. Plus, having a super-multicultural population helps keep things spicy.

Sam: I’m going to argue you a bit on how Americans see y’all. The concept of Canada isn’t exotic, but Canada’s cities are. Listen to the way someone from the South so much as pronounces Montreal, or ask any New Yorker her impression of Vancouver. I lived in Van for more than two years, and can report that Americans see it as a mix of Portland, Alaska, and Shangri-La. I lived in Toronto for about a year, and admit, yeah, it has an old-money Brit flourish to it, but it’s basically Chicago (where I lived during my undergrad years) with worse public transit, worse pro hockey, a worse lakefront, and an inflated sense of self-importance: Whereas Chicago has settled into its role as a Second City, Toronto sees itself as Canada’s New York. (Which doesn’t exist anywhere.) Americans though, if you ask about Toronto, tend to have a unifying if banal observation: They went one time and couldn’t believe how clean it was. Which does hint at a “livable” city, in a sense, but which to me points toward a visitable city, which is a different animal.

Yasmin: I’ll take “clean” and “visitable” as compliments, Sam, but anyone who’d describe Toronto so lamely obviously hasn’t spent much time there lately. You claim that Toronto’s got a sense of self-importance: I prefer to think of it as ambition. It’s the reason Toronto’s on this list while cities like Hamilton and Halifax aren’t. In recent years, Toronto’s had the balls to host an annual international film festival, to put on the great outdoor art show Nuit Blanche every year, and even to successfully weather the Rob Ford saga. That hustle, whether or not it’s trying to catch New York, is what’s drawing big businesses like Apple and Amazon and Google to set up corporate HQs in the city. People are moving in and want to be part of the city’s growth. Everything about that says “livable” to me.

Sam: Toronto’s rich, true, and there’s a lot happening there culturally. (And I include Rob Ford’s perpetual circus in this; one of my few claims to fame as a freelancer in Toronto was shooting photos of his crackhouse for Gawker.) But its rents are reaching blowout range — as are Vancouver’s, of course. The key to living in these “livable” cities is to have bought a home there 20 years ago and to have your retirement financed by the basement you sublet to a recent college grad. All that aside, if you can put up with the savage winters and the sludgy traffic, Toronto’s a hell of a fun place to call home. Draw a three-mile circle around the CN Tower and you’re bound to be somewhere cool. Now Calgary, on the other hand. I’ve spent about a month there, half in a November, half in a couple of Julys. It’s not in the same league, really, as Toronto or Vancouver. It’s an oil-flecked mini-Dallas on the prairies, with more money than sense, albeit close enough to the Rockies that you can always escape to a cold lake or gorgeous hike. I helped on a Parliamentary campaign there a few years back, and knocked on hundreds of doors in that town. There were lots of capital-c Conservatives there who didn’t much care to hear from my candidate. But you’d be surprised how many people in red-meat Alberta are watching gameshows pantsless and getting straight-up blazed on weekday afternoons.

Yasmin: I’ll admit that I was a bit thrown by Calgary, but as a Torontonian I’ll admit I was always a bit jealous of their cavalier Wild West ’tude, which seemed kind of roguish and fun compared to Toronto’s obsession with cool sophistication. But I guess you’ve got to have that sense of adventure if you’re out there poking holes in that vast prairie for oil. There’s a lot of talk about Calgary being Canada’s next “cultural capital,” which is a bold statement, but I don’t doubt that there’s a lot happening there, arts-wise. Illangelo, the producer who pretty much created the Weeknd’s sound, is a Calgary native, and the city’s also home to the Braids, Viet Cong, and Women, three bands that don’t exactly have boring-city vibes. Still, having a hot art scene isn’t going to make those winters any more bearable. I’m with you on Calgary, Sam, but I’m interested in seeing how it grows in the next few years.

Sam: Go, visit! I found Calgary too Texan for my tastes, but then, Alberta was effectively settled by Texans who went north when the province struck oil in the ‘40s. Thing is, I can’t imagine that living there is any better, measurably, than any number of cities in the world — fifth on the Economist ranking seems like a glitch in the magazine’s matrix. So many other cities won’t whack you with a winter that dips into the minus-30s, and so many other cities have better public transportation, less sprawl. I simply can’t imagine it’s much of a place to live if you’re not well-off. I’ll say this for Vancouver, which is one of the least-affordable cities on the planet: Even if you’re broke as a grad student, as I was when I lived there, the natural environment offers so much, so freely. Great views, free public beaches, Stanley Park, the University of British Columbia’s vast Endowment Lands. Cheap access to a city’s finest attributes should be weighted heavily in these surveys. Vancouver (like Toronto, frankly) will absolutely impoverish you, if you let it, but it also gives a lot back. A bike and a bus pass make for rich living in Vancouver, even if you’re paying $800 a month to split a basement apartment. Do you think it has that reputation, even among Torontonians? And what do you miss most about Toronto, now that you live in New York?

Yasmin: Toronto’s getting way expensive, that’s for sure, and I think any honest denizen of the six would admit that you could probably get more bang for your buck in any other city in Canada, including Vancouver. I’ve come to accept the cost of living in my hometown is only going to get higher from here, but I’m willing to deal with it if it means the city will keep growing. I moved to New York just as Toronto was beginning to come into its own, which, at the risk of sounding reductive, is largely thanks to Drake, who’s done a staggeringly good job of giving Toronto its own face and attitude. It’s been bittersweet to watch it from afar. I miss the way commercial and corporate towers seem to pop up among old blocks of gorgeous detached homes, right in the middle of the city, in neighborhoods like Ossington and the area around OCAD. That pretty much sums up Toronto for me: It’s a home first and a city second. Plus, you can’t beat the street meat.

Sam: Aside from the damn streetcar tracks constantly trying to snag your bike tires, Toronto’s downtown is pretty fantastic. Farmers markets, jazz concerts, and Doors Open in the summer, Nuit Blanche in the fall, board game cafes for the winter. And wonderfully weird shit all the time. One of my favorite discoveries there was coming across a rally by First Nations protestors at Yonge and Dundas, calling for the right to sell the pelts of seals they were allowed to eat but not otherwise profit from. Canada’s more complicated than Americans give it credit for.

Yasmin: We don’t even pretend to not be weird. Can it get any more charming than that?

Sam: Canada is stealthy-weird. The polite neighbor who keeps to himself until it turns out he’s minding a mass grave in his basement. Or who elects Rob Ford as mayor, as the case may be.

More like this
Innovation
Jan. 19, 2023
A robot choreographer reveals why M3GAN — and all robots — should dance
By Molly Glick
Culture
10 hours ago
Chinatown Is Still a Thrilling, Clear-eyed Portrayal of the Arrogance of Power
By Chrishaun Baker
Culture
Jan. 29, 2023
Lazy people swear by these 50 extremely helpful, low-effort products
By Cristina Sanza
LEARN SOMETHING NEW EVERY DAY.
Share: