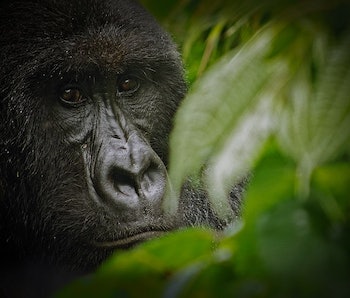 To anthropologists, humans performing a death ritual are humans who are aware of their mortality. Feelings of grief can be instinctive, but a death ritual suggests one knows why they are grieving. That’s why a study on gorillas released Tuesday in PeerJ adds complexity to the idea of mourning: Gorillas exhibit some unique behaviors around their own dead, even if doing so puts them at risk for contracting deadly disease. These observations suggest we’re not alone in our acknowledgment of the deceased.

Amy Porter, Ph.D., is a scientist who works with the Dian Fossey Gorilla Fund International who observed two rare instances of gorillas mourning their dead. In the Democratic Republic of Congo, she watched gorillas observing the corpse of a silverback male. In Volcanoes National Park, Rwanda, her colleagues saw gorillas look over the dead bodies of a dominant adult female and a silverback male. There was a key difference between the two observations: While the individuals who gathered around the dead mountain gorillas in Rwanda were part of the same social group, the male in the DRC was unknown to the gorillas who found it.

Though the gorillas certainly responded to the corpses, Porter and her team sought to find out how they were responding. Do gorillas act differently towards the death of a gorilla they were close with? How do they know when an animal is dead? Do they even know?

Porter tells Inverse that for a long time scientists have debated whether animals had a concept of death. “Now, observations across a wide range of animals show complex and fascinating responses around death,” she emailed from the field in the DRC. “But it is not clear how animals learn about and process death.”

Chimps, for example, sometimes clean the teeth of their dead. Western scrub jays will hold “funerals” — loud vocalizations that grow in number as the birds come upon a dead member of the flock. Elephants, meanwhile, take time to consider the bones of their relatives.

Porter explains that gorillas are ideal animals to study if you want to get a better understanding of animal mourning. They live in cohesive social groups, each of which contains an internal hierarchy. Studying how a gorilla deals with death is an opportunity to study an animal that moves through a range of social relationships.

The team hypothesized that the two gorilla corpses in Rwanda would receive more attention because they were approached by members of the same social group, while the male corpse in the DRC was approached by members of a different group. In some ways, that was true. When Titus, the dominant mountain gorilla silverback, died in Rwanda, a juvenile male he was close with stayed near his body for two days, sometimes sleeping in the same nest with it. After the death of Tuck, the adult female in Rwanda, her juvenile son groomed the corpse and even tried to suckle, despite already being weaned. This behavior, the scientists say, likely indicated his distress.

In the DRC, the silverback Porter witnessed didn’t have a social group, but when he died, gorillas who came upon his body by chance still took time to sit close to the body, stare at, and groom it. He didn’t receive the same level of attention as the others did, but he was still seen.

These observations provide some new data points for researchers like Porter who are investigating gorilla behavior, but it still remains unclear how common these interactions with corpses are. Gorillas who are sick and injured often leave the group to die alone, or they are abandoned when they can no longer keep up.

“We have a lot to learn about when and why animals choose to stay with a corpse, how social relationships between individuals and the deceased affect the behavioral responses, and how the context of death can influence the response,” Porter says.

They also have more to learn about how animals grieve the loss of a close companion.

Physically remaining close, however, could come at a cost.

Porter and her colleagues are concerned that the closer interaction and physical contact observed here could increase the chance of disease transmission if the gorilla dies from illness. African apes are especially susceptible to viruses like Ebola and suffer from high death rates once coming into contact with a contaminated individual.

Porter explains that there’s been a lot of debate about how, in gorilla populations, diseases spread and outbreaks get amplified. Previously, scientists didn’t think group-to-group transmission was a major contributor to outbreaks because direct physical contact between groups is generally rare.

However, this study shows that gorillas still approach dead gorillas who aren’t in their groups — and furthermore, research has shown that final stage Ebola victims secrete large quantities of infected bodily fluids, which could contaminate the surrounding vegetation. Tissues from wild ape carcasses have also been shown to yield viable Ebola virus for up to three days after death, a dangerous fact considering gorilla groups sometimes overlap in their home ranges. Ebola has killed thousands of gorillas, and scientists are still figuring out how to manage outbreaks,

“The close inspection of corpses by nearly every group member in all three of our cases suggest direct ape-to-ape transmission, as well as group-to-group transmission, could play a substantial role in disease outbreak amplification among gorillas,” Porter says.

Porter feels incredibly lucky to not only have seen the gorillas observe the dead, but to have documented it as well. Many more questions remain to be answered, but in the meantime, gorillas will continue to do what we’re only now beginning to witness.

Humans were once considered unique in having a concept of death but a growing number of observations of animal responses to dying and dead conspecifics suggests otherwise. Complex arrays of behaviors have been described ranging from corpse removal and burial among social insects to quiet attendance and caregiving among elephants and primates. Less frequently described, however, are behavioral responses of individuals from different age/sex classes or social position toward the death of conspecifics. We describe behavioral responses of mountain gorillas (Gorilla beringei beringei) to the deaths of a dominant silverback and a dominant adult female from the same social group in Volcanoes National Park in Rwanda and the responses of Grauer’s gorillas (Gorilla b. graueri) to the corpse of an extra-group silverback in Kahuzi-Biega National Park, Democratic Republic of Congo. In gorillas, interactions between groups or with a lone silverback often result in avoidance or aggression. We predicted that: (i) more individuals should interact with the corpses of same-group members than with the corpse of the extra-group silverback; (ii) adult females with infants should avoid the corpse of the extra-group silverback; and (iii) in the mountain gorilla cases, individuals that shared close social relationships with the dead individual should spend more time with the corpse than other individuals in the group. We used a combination of detailed qualitative reports, photos, and videos to describe all occurrences of affiliative/investigative and agonistic behaviors observed at the corpses. We observed similar responses toward the corpses of group and extra-group individuals. Animals in all three cases showed a variety of affiliative/investigative and agonistic behaviors directed to the corpses. Animals of all age/sex classes interacted with the corpses in affiliative/investigative ways but there was a notable absence of all adult females at the corpse of the extra-group silverback. In all three cases, we observed only silverbacks and blackbacks being agonistic around and/or toward the corpses. In the mountain gorilla cases, the individuals who spent the most time with the corpses were animals who shared close social relationships with the deceased. We emphasize the similarity in the behavioral responses around the corpses of group and extra-group individuals, and suggest that the behavioral responses were influenced in part by close social relationships between the deceased and certain group members and by a general curiosity about death. We further discuss the implications close interactions with corpses have for disease transmission within and between gorilla social groups.