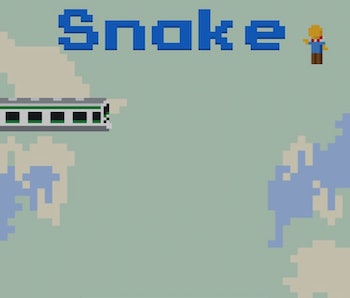 In what appears to be one of the more pure-hearted April Fools displays going around today, Google has introduced its version of the classic arcade game, Snake. Before we dive into how to play, a warning: For so sssssimple a game, #GoogleMapSnake is incredibly entrancing. Er, “entranSSSSing.”

Often heralded as the granddaddy of mobile games, Snake, inspired by the long-running arcade game of the same name, launched on the Nokia 6610 in 1997. Users were tasked with directing their snake towards bits of “food,” while avoiding both the edges of the screen and the snake’s own body. With each new ssssnack, the snake’s body got longer. Avoiding tangles with your snake’s own midsection was often a player’s ultimate downfall. The Google Maps Snake version is much the same.

Once you’ve updated your Google Maps, the “Play Snake” option will sssssneak into your drop down menu.

You’ll then be asked to choose a destination. Rather than a Tetris-esque snake, players are encouraged to ssssselect destination-specific trains, from a San Francisco streetcar to a Tokyo subway car.

Players direct their train of choice around the screen with their finger, picking up passengers along the way, instead of snacks. Just like in the original Snake, the goal is to collect as many passengers as possible without hitting the edge of the screen or your own train’s tail.

Now, full disclosure, I have poor hand eye coordination and chubby fingers and that is definitely why I originally nabbed a personal high score of, uh, “2,” but as I mentioned earlier, Snake sssssucks you in. And I immediately began playing a second time — and a third time, and a fourth time —ultimately earning a still-embarrasssssing score of: 38. All the same, Google Maps Snake provides an immediate sense of nostalgia for those of us who grew up playing mobile games on flip phones. What a ssssimpler time.

Snake is not the only strategic April Fools launch out of Google. While Google Maps Snake seems to incentivize users to download the latest Google Maps version, Google’s “Screen Cleaner” update, which claims it helps users keep their actual phone screens clean from dirt and fingerprints, ultimately encourages users to use Google’s “Files” app. And it’s maybe there, in Google’s ability to pull us into engaging with their apps, that the April Fools prank spirit lies.

Snake will be available in both the iOS and Android Google Maps apps for about a week.

More like this
Innovation
8.15.2022 8:30 PM
This high-tech camera may help protect our identities — here's how it works
By Molly Glick
Innovation
8.17.2022 6:15 PM
Can we terraform Mars? Scientists may have made a major breakthrough
By Jeff Nagle
Innovation
8.17.2022 3:05 PM
Scientists create fake leaves that generate a clean fuel source
By Sarah Wells
Related Tags
Share: