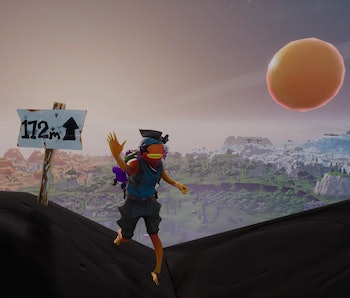 Around this point during Fortnite: Battle Royale Season 7, we all had to complete a maddening challenge to slide an ice puck 150m or further, and a similar Season 8, Week 5 challenge revealed Thursday morning is even more frustrating — mainly because Fortnite physics make absolutely no sense. Luckily, there’s a way to hack this challenge to make it super-easy.

“Get 15 bounces in a single throw with the Bouncy Ball toy” sounds simple enough, but the trajectory the ball travels feels otherworldly. The Bouncy Ball is a new toy in Season 8 that’s unlocked as part of the premium battle pass at Tier 26. By now, even casual players have probably reached that far in the battle pass to unlock it. Like most of the other ball-based toys, by activating it, the player hurls the object straight ahead. Unlock ice pucks, which have a bit of heft to them, the bouncy ball has seemingly no weight to it at all, so it’s trajectory feels really weird.

You can throw this thing off the top of the volcano right into the ocean a few map squares away, so part of the trick is to aim down so it hits the ground at full speed. That’ll maximize the number of bounces. You can pretty much just fling the thing a few times and hope for the best.

There is a surefire way that’s much easier. Hat tip to Polygon for this one, but the best way to complete this challenge is to farm enough wood to build a full box, including the floor and ceiling. Build it around you until it’s complete and then toss that bouncy ball. It is all but certain that it’ll bounce more than enough times to complete the challenge.

The in-game countdown indicates that Season 8 ends on May 8, so players have until then to complete this and other challenges before Season 9 arrives.