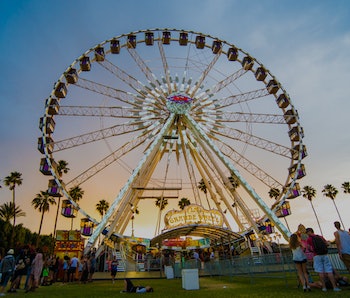 Finding drugs at a music festival is about as easy as finding music at a music festival. But finding out where the end up on the other end of your buddy’s bad trip is a bit more complicated. As soon as your wide-eyed friend hits the bathroom, those drugs end up in the sewage system that ultimately leads out into the lakes and rivers nearby. Before you know it, you’ve got a lot of fish swimming around and feeling awesome.

Or not so awesome.

Scientists are finding more and more illicit substances flowing into the ecosystem after special events like music festivals. A study from last December authored by public health researchers in Taiwan found that a local festival named “Spring Scream” caused a spike in the drug content of water in and around the beach town of Hengchun. Specifically, the H20 was thick with ecstasy and ketamine, which is a bit more common in that part of the world. Given that “Spring Scream” attracted more than 600,000 music fans, this shouldn’t come as a surprise. Even if only 100,000 people took drugs, there would be little to no chance those chemicals wouldn’t be more prevalent in the environment post-show.

Studies like these are part of a new and important effort to understand the phenomenon of “emerging contaminants,” drugs (both legal and illegal) and hygiene products that end up in waste water in high concentrations. Recent studies suggest that only half of all emergent contaminants in treated sewage water are actually removed before the water goes back into the ecosystem, posing risks to both aquatic and terrestrial life. In short, we may all be on drugs all the time even if the government isn’t force feeding us fluoride to make us passive slaves to the man.

A 2011 paper by the U.S. Environmental Protection Agency, presented as one of the first broad overviews of illicit drugs as environmental contaminants, only serves to underscore this point. Among the substances found in drinking water: codeine, methadone, amphetamine, methamphetamine, MDMA, cocaine, and even LSD. This is kind of an amusing factoid if you live in San Francisco, but not so much if you live in the Coachella Valley.

And with new kinds of both pharmaceuticals and recreational drugs finding their way onto market, wastewater treatment systems are in the midst of a losing game to keep on top of all the things they need to look for.

It’s not just music festivals — drug levels in the water spike any time there’s a large influx of people bent on taking them. Could be football games, holiday weekends, special events, whatever. For example, in London, amphetamine levels rose during finals week for the city’s universities as students snorted and gulped Adderall and Ritalin. Another London study observed how smaller spikes in ecstasy and cocaine occur on average weekends.

The effects of party drugs on the environment are still not very well understood. We just don’t really know about much of the long-term effects — let alone what areas are most threatened by what kinds of cocktails. But there are some previous observations about what drugs, especially pharmaceuticals, can do to natural ecosystems, and the signs aren’t great.

The main thing to remember is that different organisms metabolize and cope with outside substances differently than we do. A previous study found that male minnows exposed to trace amounts of antidepressants became more aggressive, while females produced fewer eggs. Prozac has been found in both drinking and recreational water supplies around the Great Lakes, and while the low levels are virtually harmless to humans and animals, E. coli populations have decreased. Changing the microbial landscape of the waters could cascade into catastrophic impacts later on, but we won’t know for many years.

A 2013 review study by Australian researchers acknowledges how little researchers know, but still attempts to summarize what’s been found up till now, citing defects in zebra fish resulting from cocaine, genotoxic effects of cocaine on mollusks, and worsened immune systems and slower metabolisms in mussels and fish exposed to morphine.

With more than 70 percent of the world’s population expected to live in urban spaces by 2050, the waterways around much of the world’s major cities could soon transform into an unholy vat of psychedelic runoff. Fortunately, there is one solution that could work to offset this: Wetlands act as a kind of natural filtration against pollutants. Many cities on the coast like Miami and New York City are exploring ways to beef up the wetlands found on the coast and those new landscapes could play a crucial role in providing clean water to wildlife and bolstering the work of nearby treatment plants.

Till then, just remember that the ecstasy you’re peeing out after Electric Zoo next month could very well end up back in your tap. It’s the only hangover you’ll get, but it’s not a good one.

More like this
Innovation
Jan. 16, 2023
3D-printed “organs” could lead to better drugs
By The Conversation and Chengpeng Chen
Science
Jan. 23, 2023
Elephants could be key to saving the planet — here’s why
By Tara Yarlagadda
Science
Jan. 23, 2023
Is plastic recycling a scam? Here’s the truth about the common practice
By Tara Yarlagadda
LEARN SOMETHING NEW EVERY DAY.
Related Tags
Share: