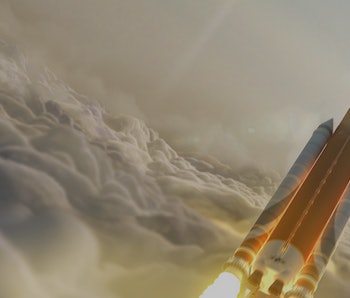 This week in Huntsville, Alabama, Vice President Mike Pence announced a literal moonshot: put Americans back on the moon within five years, four years earlier than NASA’s schedule. Now, NASA will have to bend over backward to ensure that the administration keeps its promises, which date back to 2017.

Pence told the audience that NASA Administrator Jim Bridenstine told him five minutes before his speech that NASA had a plan to return to the moon by 2028 and build a permanent outpost there — the likes of which have never been done before. But Pence, appearing to immediately process that fresh information, was unimpressed by NASA’s timeline. Within minutes, he seemingly calculated a new prediction (or perhaps he was eyeballing it a little) that NASA should cut that 2028 goal by nearly half.

You know, after years of cost overruns and slipped deadlines, we’re actually being told that the earliest we can get back to the moon is 2028. Now, that would be 18 years after the SLS program was started and 11 years after the President of the United States directed NASA to return American astronauts to the Moon.

Ladies and gentlemen, that’s just not good enough. We’re better than that. It took us eight years to get to the Moon the first time, 50 years ago, when we had never done it before, and it shouldn’t take us 11 years to get back.

And I’m here, on the President’s behalf, to tell the men and women of the Marshall Space Flight Center and the American people that, at the direction of the President of the United States, it is the stated policy of this administration and the United States of America to return American astronauts to the Moon within the next five years.

“In order to succeed, as the administrator will describe today, we must focus on the mission over the means,” Pence said later. “If our current contractors can’t meet this objective, then we’ll find ones that will.”

Pence’s speech characterizes NASA as a space agency that has the budget, technology, and personnel required to get humans back to the moon in five years, but his words also describe an agency slowed by complacency.

Does NASA Have the All Technology It Needs to Actually Get to the Moon by 2024?

The new moon mission is far more ambitious than the Apollo missions referenced by Pence. It requires sending up a spaceship called the Lunar Gateway which serves as a home base for a sustained lunar human presence. From there, lunar landers will transport astronauts from back and forth between the gateway and the moon to perform experiments and commercial work.

It’s a large undertaking, and it’s been a while since NASA launched a manned mission from its own technology on an even smaller scale. Since the space shuttle program was retired in 2011, Americans have relied on Russian technology to get astronauts to the International Space Station. As NASA historian and “Dean of Space Policy” John Logsdon, Ph.D., previously told Inverse, “It’s a bit of an embarrassment.”

That’s not to say we aren’t making progress towards manned missions. Commercial space enterprises, like SpaceX, are testing crew capsules to send astronauts to the ISS (the first Crew Dragon test was in early March). But the Lunar Gateway project requires more equipment, more people, and a really big, specialized rocket to get all of it there, which is why NASA is focused on its Space Launch System, a mega-rocket built by Boeing that will get components of the Gateway into orbit, and Orion spacecraft. Together, these components form the “backbone” of the Lunar Gateway.

Unfortunately, the SLS is a hang-up for Pence — who took aim at it in his speech, and hinted that they will consider other contractors if NASA doesn’t speed up their timeline. However, NASA said the SLS is the “only rocket that can send Orion, astronauts, and large cargo to the Moon on a single mission.”

This could be an empty threat on Pence’s part that will push NASA to the limits as it tries to whip the SLS into shape with half the time they were expecting to have. But regardless, NASA has said they’re embracing Pence’s call. The agency tweeted on Tuesday, “we are up for the challenge!” NASA administrator Jim Bridenstine added that the agency is looking at “creative approaches to advance SLS manufacturing and testing” that will help them stay on schedule.

Orion, on the other hand, may be able to hit Pence’s deadline, but it will require them to rethink aspects of the spacecraft’s design. Lockheed Martin, the company responsible for building Orion, said the timeline was “aggressive but achievable” but would require design changes. For example, they proposed launching on an earlier version of the Lunar Gateway that focuses only on the critical propulsion and docking components.

Though the SLS and Orion are two major components that will be impacted by Pence’s words, there are still some tiny, unmentioned details of sustained space prescence that he neglected to mention.

As we learned from the cancellation of the all-women’s spacewalk, there is a dearth of space suits designed to fit people of differing shapes and sizes. In fact, there is a shortage of new spacesuits. A 2017 inspector general report notes that “given the current development schedule, a significant risk exists that a next-generation spacesuit prototype will not be sufficiently mature in time to test it on the ISS prior to 2024.”

To cover all the bases, from minute details to the SLS, NASA will need funding, which, at least in comparison to previous missions, may be lacking, too.

Does NASA Have the Money?

The most recent NASA budget shows there’s a new influx of cash aimed at achieving the goal of constructing the Lunar Gateway. Trump’s budget allocates $21.5 billion dollars to the project. By comparison, the Apollo missions, which consisted of 33 flights (11 manned) over 11 years, cost $25.4 billion dollars at the time. Adjusted for inflation to 2008’s standards, that 163 billion US dollars.

It’s still hard to tell how far Trump’s current budget will go to accomplishing the Lunar Gateway on the new timeline — though the comparison to Apollo makes it seem like the current budget falls hundreds of billions short.

But as key as money will be, it’s still no substitute for time. When NASA’s new 2019 budget was announced in March, NASA’s chief financial officer Jeff DeWit didn’t bemoan lack of funding; he actually asked for patience.

“This is a deeply technical condition in terms of getting there faster. So we are not asking for more money for us to do the job. We just need a little more time,” DeWit said.

Why Is the Timeline Important?

Patience, however, may be in short supply in the White House. Trump’s Space Policy Directive 1 — which directs NASA to return to the moon but also to work with commercial partners to do so — was signed in 2017. When Trump signed this directive, Pence framed it as “yet another promise kept by President Trump.” But going by the 2028 timeline, Trump’s promise to return to the moon wouldn’t be realized until after the 2024 presidential election and likely in the midst of the 2028 presidential election.

The political allure of a promise kept could be a powerful player in the administration’s call to speed up the timeline, even if the technology or funds may not be available yet. Perhaps intrigued by that big idea, this administration is ready to pull out all the stops to make 2024 happen, which is why Pence essentially gave NASA an ultimatum: If NASA can’t meet his tight deadlines, then the government will look for people that at least say that they can.

Pence already predicted that those ready to answer the call will be private companies, which, according to Space Policy Directive 1, this administration is eager to see NASA collaborate with in the first place. Already, plenty of private space companies have floated even more ambitious goals than Pence’s. Elon Musk emphasized that he will get humans to Mars by 2024, calling five years “a long time.” Jeff Bezos, the founder of Blue Origin, plans to take the first steps toward a moon colony by 2023.

If these companies are safeguarding fast-track solutions that can surpass Pence’s expectations, then maybe his comments are a good kick in the pants for NASA and its current contractors. But if they’re not, Pence is floating the same ethos that gave us the Edison machine: float a big idea and wait for the actual science to catch up (assuming that it can.)

“Urgency must be our watchword,” Pence said. “Failure to achieve our goal to return an American astronaut to the Moon in the next five years is not an option.”