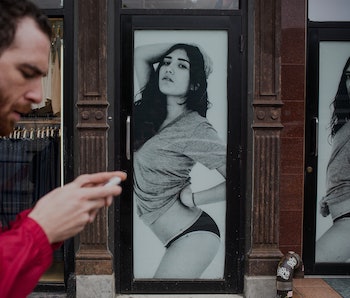 American Apparel — the brand known for their $60 neon t-shirts, borderline pornographic ads featuring underage-looking models, and less-than-excellent treatment of employees — has announced that the business stands on shaky ground and likely won’t last another year. And that’s too bad for … whom, exactly?

It might be shocking that a brand that thought pubic-haired mannequins were a good idea and held casting calls for “real models, not Instagram hoes or Thots” did not have a good business plan, but there you go. The New York Times has already dubbed its “anything goes” model a lesson in how not to run a company, outlining how the board turned the other way while CEO Dov Charney spent his time sexually harassing the women employees and masturbating in front of reporters. Even after the board was finally forced to fire him, the financial damage had been done.

Although American Apparel comes off as comically evil, even Trumplike, the company has also done some good. It makes its clothes in America, pays employees well if they ignore the racism and harassment, and supports various social justice causes. But the empire is crumbling beneath the weight of its own hubris. It’s all very classic.

Classical antiquity, that is. Not the other kind of classic being bandied about.

As American Apparel kicks feebly, some have speculated the company is casting about for a knight. But American Apparel doesn’t seem to realize that, though its goal of selling American-made clothing may have once been noble, the company has long since turned. There’s no longer an ideal there to be saved. Anyone who rides in on a white horse will be compelled by honor to slay this monster.

More like this
Innovation
18 hours ago
Horrifying: Robots may have just gained a creepy new skill
By Molly Glick
Innovation
8 hours ago
Scientists have created a mechanical womb that can grow life in the lab
By Miriam Fauzia
Innovation
Sep. 28, 2022
Look: This tiny robot could change medicine forever
By Katie MacBride
Share: