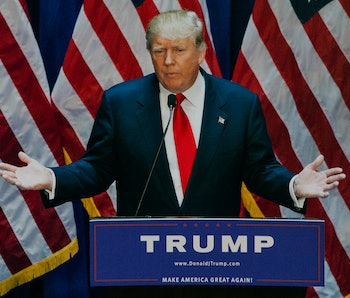 NBC this week said it was shocked — shocked! — to hear Donald Trump, a presidential candidate who doubles as a welfare program for starving late-night comedians, disparage Mexican immigrants en masse as drug-runners and rapists. The network is dumping Trump’s Miss USA and Miss Universe pageants. Trump in turn is suing the network for Monopoly fun-money damages.

Kudos to NBC for finally, belatedly taking a stand on Trump’s casual shit-weasel xenophobia. But where has the Peacock been for the past decade? Was Trump’s presidential announcement the first time he called Latinos a pack of thieving rapists? Of course not. He’s been an open sewer for years. Take, oh, June 2013.

Did America still get a whole new season of Celebrity Apprentice for Geraldo Rivera and Lorenzo Lamas and Terrell Owens to smear themselves prostrate upon Trump’s desk? It did.

NBC didn’t fire him when it came out that he was sued by the Justice Department for refusing to rent to blacks. They didn’t fire him when he weighed in on Alejandro Iñárritu’s Best Picture win at this year’s Oscars with this brokedick attempt at wit: “It was a great night for Mexico, as usual.” They didn’t fire him for the years of sweaty, late night Twitter rants questioning the president’s origins or when Trump harpooned the whimpering shred of public dignity he might’ve maintained by putting a bounty on Obama’s birth records.

I doubt Trump’s latest blustering, perfectly in line as it is with a long oral tradition of gibberish, has finally brought NBC to its senses.

I do, however, think NBC is a company taking fire for its own issues, like following up the white-supremacist murder rampage in South Carolina with a montage of past mass-shooters who all happened to be black. A company whose idea of racial sensitivity is serving fried chicken and collared greens to honor Black History Month. Under equal-time laws, the moment Trump formally announced his candidacy NBC had no choice but to remove him from the air, whether he went to that podium and to reveal the secret of cold fusion or to announce Omarosa as his running mate.

That last part, I think is what really changed. Not the shaky ratings, or cruelty, or his willingness to turn the election to our nation’s highest office into a three-ring ego trip. Just that they had to cut him loose regardless, and doing it this way was better PR. Because under the terms Trump set himself when he officially put his hat in, he was leaving one way or another. In essence, he fired himself, for once. He could’ve made his inevitable exit with a shred of grace.

Instead, Trump found a way to fuck up that deal. As only he could. And NBC, which had enabled him for years, was the one that got to save face.