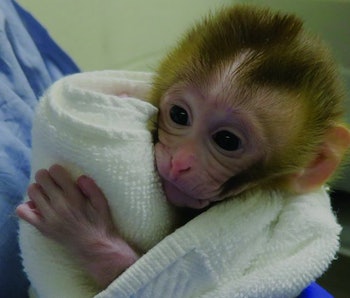 In the mid-1970s the survival rate for children with cancer was around 58 percent. Today, more than 80 percent of children with cancer survive. This miracle of medicine has opened the door for scientists to ask a question they didn’t have the benefit of asking before: How can we help these kids one day have their own children? After all, while more children than ever are beating their cancer, 30 percent of these childhood cancer survivors are infertile as adults.

A study published Thursday in Science proposes an innovative approach that could one day alleviate pediatric cancer survivors’ fertility concerns. The experimental technique, which involves frozen, immature testicular tissue and spermatogonial stem cells, has already shown success in one child: A female rhesus monkey named Grady, so named because she is a “graft-derived baby.”

Chemotherapy and radiation treatment can damage a man’s ability to produce viable sperm, which can lead to permanent infertility. When adult men are diagnosed with cancer, they can plan for the future by choosing to cryopreserve their sperm for later use. However, boys don’t produce sperm until they hit puberty, when their body tells stem cells in the testes to start producing sperm. The only fertility preservation option available for prepubertal boys is to cryopreserve testicular tissues, which contain spermatogonial stem cells.

In this proof-of-concept study, the team focused on this latter option. The scientists removed and froze testicular tissue from five rhesus macaques who were too young to produce sperm. The macaques were castrated, then treated with chemotherapy. Afterward, the removed tissue was thawed and transplanted as a graft under the skin of the animal it came from.

When the scientists evaluated the animals, now post-puberty, eight to 12 months later they found that the testicular tissue had produced sperm. This success — the production of sperm by cryopreserved prepubertal testicular tissue — has happened before in other studies. The real novelty of this study is that a living, healthy baby — Grady — was born from the sperm the tissues produced.

The researchers sent the sperm to the Oregon National Primate Research Center, where it was used to fertilize 138 eggs. Forty-one percent developed into early-stage embryos, and 11 of these embryos were implanted in female macaques. One resulted in a pregnancy and subsequent birth. Live offspring, the scientists write, is “the gold-standard proof of concept for any reproductive technology.”

An important caveat here is that testicular tissue was grafted into castrated animals, which would not be the case with prepubertal cancer survivors. Another caveat is that, when it comes to humans, the testicular tissues collected before cancer treatment could contain malignant cells. Still, the team thinks that this is the right step forward and is now preparing for a clinical transition. At the UPMC Magee-Womens Hospital in Pittsburgh, there’s already a program in place that offers pediatric cancer patients the option of cryopreserving testicular or ovarian tissue before beginning treatment.

“The reason that we did these studies in a non-human primate is that we thought that this was really the last step on the road to translating to the clinic,” senior author Kyle Orwig, Ph.D., a professor at the University of Pittsburgh, explained Thursday. “Having produced a live-born and healthy baby, we feel that this is a technology that is ready to be tested in the clinic.

“This advance is an important step toward offering young cancer patients around the world a chance at having a family in the future.”

Testicular tissue cryopreservation is an experimental method to preserve the fertility of prepubertal patients before they initiate gonadotoxic therapies for cancer or other conditions. Here we provide the proof of principle that cryopreserved prepubertal testicular tissues can be autologously grafted under the back skin or scrotal skin of castrated pubertal rhesus macaques and matured to produce functional sperm. During the 8- to 12-month observation period, grafts grew and produced testosterone. Complete spermatogenesis was confirmed in all grafts at the time of recovery. Graft-derived sperm were competent to fertilize rhesus oocytes, leading to preimplantation embryo development, pregnancy, and the birth of a healthy female baby. Pending the demonstration that similar results are obtained in non-castrated recipients, testicular tissue grafting may be applied in the clinic.