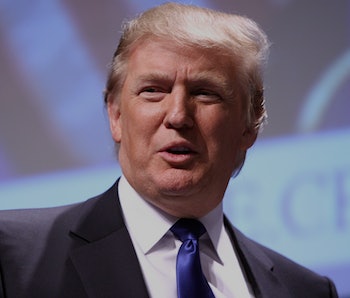 President Donald Trump’s 2020 budget proposal asked for $4.75 trillion. It was the largest request ever made in federal history and a clear declaration of the president’s priorities. Alongside a demand for $8.6 billion to construct a wall between the United States and Mexico, it included massive cuts to scientific programs specifically designed to combat climate change.

Those budget cuts are predominantly spread across three departments: the Environmental Protection Agency, the Department of the Interior, and the Department of Energy. The proposed budget would also eliminate two NASA Earth science missions designed to monitor climate change and make a 13 percent cut to the National Science Foundation. Trump’s plan does not detail how any money will actually be distributed within the NSF.

Americans won’t know until October whether any of Trump’s financial plans will come to pass. Until then, the House and Senate will go back and forth, offering their own budget resolutions and appropriations bills. History suggests that Congress won’t accept Trump’s budget as is: The legislature has rejected many of his previous financial appeals, and Democratic leaders declared the 2020 budget dead on arrival.

Nevertheless, the cuts are evidence the administration has not budged on its stance on climate change, which is sometimes apathetic and oftentimes combative. Here’s how Trump’s budget would curtail efforts to combat and understand climate change, broken down by department.

The Department of Energy

Trump’s 2020 proposal includes a $3.8 billion cut to the Energy Department, changing its allocation from $35.5 billion to $31.7 billion. It would boost coal and nuclear energy while subduing programs designed to combat climate change and promote renewable energy. Specifically, it looks to decrease the funding for the Office of Energy Efficiency and Renewable Energy by 70 percent. The job of that office has been to allocate research funds to projects related to electric vehicles, battery storage, and building efficiency.

At the same time, the proposed budget would put $60 million toward fossil fuel development and $67 million to the Office of Nuclear Energy.

The EPA is the federal body hit hardest by the 2020 proposed budget. Trump wants to cut its funding by 31 percent, changing its funding from $8.8 billion to $6.1 billion. This isn’t entirely surprising, as the president has made it clear in the past that he doesn’t want to support the EPA. When he was running for president, Trump promised that “we are going to get rid of it in almost every form” until there are only “little tidbits left.”

This would include the elimination of the Global Change Research office, which helped produce the monumental 2019 National Climate Assessment. The office is in charge of coordinating how 13 agencies, including the Department of Defense and the Department of Energy, incorporate climate change research into their decision making.

The cuts to the EPA would also eliminate the Atmospheric Protection Program, which oversees climate-related partnership programs across the county. These have included the Landfill Methane Outreach Program and the Green Power Partnership.

The Department of the Interior

The 2020 budget also proposes cutting the funding for the Department of the Interior by $2 billion. Doing so would cut the money given to the Climate Adaptation Science Center by 50 percent, downgrading its budget to $23,900. Meanwhile, Trump wants to shift $86.1 million to the department’s Energy and Mineral Resource Programs — cash that goes towards the discovery and development of oil and gas resources. That money would coincide with a plan to eliminate the economic development grants given to municipalities attempting to recover from mining operations on public lands.

Trump’s budget would also eliminate all funding for the Tribal Climate Resilience Program. In 2015, in an effort to prepare tribal communities for the impacts of climate change, President Obama directed the Bureau of Indian Affairs, which is an agency within the Interior, to create the program.

“These funds will help the American Indian and Alaska Native communities on the front lines of climate change prepare, plan, and build capacity,” said then-Secretary Sally Jewell. “The Obama administration remains committed to supporting these communities as they adapt to the effects of rising sea levels, stronger storms, and other manifestations of a warming climate that we see and feel across the country.”

Things are drastically different at the Interior now. Jewell was the former CEO of REI. David Bernhardt, the current acting secretary, is a former oil lobbyist.