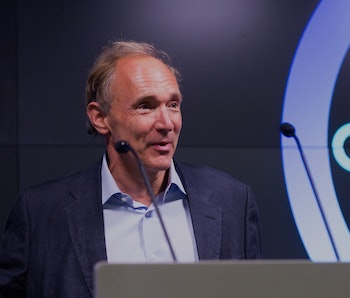 The world wide web turned 30 years old on Tuesday and Google celebrated the occasion with a front page Doodle in honor of Sir Tim Berners-Lee, the English engineer and computer scientist who first submitted a new proposal for information management in 1989. That proposal is what eventually became the ‘world wide web,’ the network of addresses that went on to become known as the information superhighway.

Despite the integral role that he already played, Berners-Lee continued being at the forefront of data accessibility efforts in the intervening decades. Here are three ways that he continued to shape the way we ~log on~ each day, besides coming up with one of the most game-changing inventions of the twentieth century.

3. He Made URLs More Readable

Berners-Lee’s system laid the foundation for modern websites by coming up with the URL, then known as a Uniform Resource Locator, which are the literal pieces of text that make the internet searchable. The “www.” and “https://“ URL preamble you still see inside of every browser was all his handy work, though he later came to admit at least one regret: the double slashes.

The world wide web creator admitted to the New York Times in 2009 that he wished he had ditched the additional syntax, which he explained was a coding convention at the time. He said it would have save early web browsers millions of keystrokes. Fortunately, modern browsers took his concern for efficiency to heart.

Thanks to search engines, internet users haven’t had to type out exact URLs for years. But there are other ways his fix came to life: Every time Chrome autofills the missing “https://“ in front of the site name you just typed in, you can whisper a quiet word of thanks to Berners-Lee for his efforts to make web addresses more readable.

Berners-Lee was also one of the earliest supporters for net neutrality, the idea that no website on the internet should receive priority over any other. He began beating this drum at least starting in 2008, when he told the BBC that internet service provides should supply “connectivity with no strings attached.” He reiterated these concerns in a 2010 op-ed where he called net neutrality a “basic human network right.”

In 2009, he went on to launch the World Wide Web Foundation, a non-profit that advocates for a free and open web for all users. More recently, the organization has spoken out against the FCC’s decision to eliminate net neutrality protections in 2017 and continues to fight for the cause.

1. Kickstarted the Push to Decentralized Internet

While Berners-Lee could very reasonably be expected to start resting on his laurels, he didn’t stop there. The computer scientist went on to help built one of the first decentralized web platforms, called Solid, in collaboration with researchers at the Massachusetts Institute of Technology.

Berners-Lee also launched Inrupt a commercial ecosystem for applications that allows other developers to build upon Solid. Its vision is to create an internet where users have full control over their data, and then companies pay users to access their information.

For now, the idea is lofty and still in its early stages. But it’s yet another example of how Berners-Lee has never relaxed in his determination to make the world’s information more readily available, accessible, and helpful to the general public.