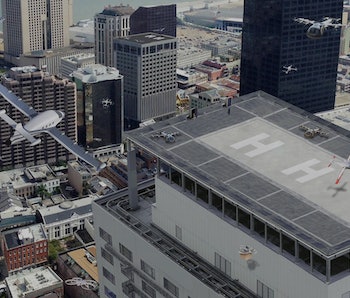 At the 1900 World Exhibition in Paris, French artist Jean-Marc Côté offered a vision of the future. He depicted the world in the year 2000 with “aero-cab stations” and aviation police — the sort of place where rural postmen deliver packages by plane. His predictions were echoed in other futuristic work: the 1960s television series The Jetsons. That world also swapped family cars for planes.

While not all of Côté’s visions will likely come to pass (we’re still waiting on those whale buses) he did have some foresight: NASA also wants a world with planes that cross cities and postmen who travel short distances by air. Furthermore, President Donald Trump seems game to fund that vision.

At the presentation of the president’s NASA budget for 2020 on Monday, NASA Administrator Jim Bridenstine began his remarks by focusing on the aeronautics side of the agency. While space ventures might be what NASA is most famous for, the first A in NASA stands for aeronautics — the science of traveling through the air.

Despite Bridenstine’s excitement, only about $667 million out of the proposed $21 billion in funding for 2020 is set to go toward aeronautics research. In 2019 this part of NASA’s budget was $725 million, and in 2018 it was $690. While that’s a cut, the projects the money is set to go towards are still prodigious — and NASA puts out the impression that they are well on their way. Bridenstine focused on three of these projects in that arena during his presentation.

Part of the budget is allocated to go toward the final assembly of the X-59 experimental aircraft. Per NASA, the X-59 “will demonstrate quiet overland supersonic flight and enable the creation of a new civil supersonic market for U.S. industry.”

The Federal Aviation Administration currently forbids flights that travel at supersonic airspeeds because of the disturbances caused by sonic booms. Bridenstine says that NASA is “working really hard to change that” with the creation and perfection of the X-59 — a plane designed to fly at supersonic speeds without the boom. To get there, the Lockheed Martin Skunk Works team is working on the preliminary design of the plane, and NASA is studying exactly what happens when supersonic jets break the sound barrier. Sonic booms are created from the shockwaves produced by aircraft as they travel through the atmosphere — by studying these shockwaves, NASA aims to create shockwaves of a quieter sort.

“What we’re doing now is we’re going to take what we’re learning from these experiments and we’re going to apply them to the X-59,” Bridenstine says. “Which is ultimately going to be flown in the year 2021.”

The X-57 Maxwell is designed to be a quiet, electric plane that’s more efficient and more environmentally friendly than other consumer planes out there. NASA is already at work designing it, as well as its fuel source: Instead of the kerosene blend used in traditional jet fuel, the X-57 runs on electrical power stored in battery packs. Because it is electric, Bridenstine claimed Monday that it will “drive down the costs of transporting people and cargo” by up to 60 percent.

“If we can drive down the cost by that amount, that means we’re going to have potentially more commercial flights going to more destinations than ever before,” Bridenstine says. “We’re going to be able to serve communities with air travel that have historically not been served with air travel.”

“One other very exciting aeronautics research directorate that I’m [long pause] really kind of intrigued by is Urban Air Mobility,” Bridenstine says. “The idea that you can fly on an uncrewed craft — there’s no pilot, I’ll say that — from one side of the city to another side of the city, just like you would drive a car.”

While a pilot-less plane might give a pilot like Bridenstine pause, the Urban Air Mobility project is the one that fits best with past visions of the future. The eventual vision is one in which large drones carry packages around cities and small planes shuttle people. What NASA is working on now is improving air traffic management so that this vision can be carried out safely, and creating relationships with the private companies that will make and provide these aircraft. So far, contracts have been awarded to Booz Allen Hamilton and Crown Consulting, Inc.

It’s a project seemingly readymade for commercial partners like Amazon. Bridenstine states that “there is industry in the United States right now very excited about that eventuality” because “it will help them get your packages to your doorstep faster and more efficiently.”

While NASA is already at work on all of these projects, their funding is technically up in the air until October. The president’s proposed budget for NASA is just a first step — legislation approving the budget has to be passed by Congress before the fiscal year starts in October, or else NASA loses its authority to spend taxpayer cash.