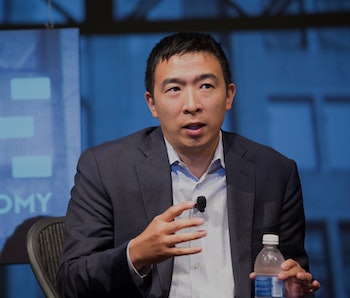 A universal basic income would be cheaper than many expect, Andrew Yang said in an interview Friday. The entrepreneur is running for the Democratic Party’s presidential nomination in the 2020 election, pushing for a policy that would give every American a $1,000 per month “Freedom Dividend.”

“It gets much, much cheaper, very, very quickly, and the reason it does is that about half of Americans are already receiving government income support in some fashion,” Yang told CBS News. That means that multiplying the monthly figure to reach an annual dividend of $12,000, then multiplying that by the 325 million population to reach $3.9 trillion, paints a misleading picture of the real costs.

The true cost of a basic income could prove even lower in practice. Elizaveta Fouksman, who researches wage labor at the University of Oxford, wrote in August 2018 that one of the key issues with calculating the cost of a basic income is working out who would be a beneficiary, who would be a net contributor, and how much the state would save through a more efficient bureaucracy. Economist Karl Wilderquist calculates the real figure as somewhere around $539 billion per year, just under three percent of the total gross domestic product.

Advocates declare basic income a way to help people maintain standards of living despite increasing use of A.I. automation and robots, with Elon Musk and Richard Branson both throwing their weight behind the idea. Beyond providing a cushion, basic income could have a positive effect on people’s health, as a trial in Finland showed increased rates of happiness and reduced levels of stress. Participants in a trial in Ontario claimed the policy enabled them to eat healthier.

As part of his run for president, Yang has outlined how he plans to pay for the policy. Social Security in total cost $988 billion last year, while Yang’s website claims the government spends around $600 billion on programs like welfare and food stamps. Under the “Freedom Dividend,” recipients would choose whether to continue receiving the same benefits or switch to the basic income, reducing the welfare bill.

Beyond welfare savings, Yang’s website proposes funding a basic income from three more sources. The first is a value-added tax at “half the European level,” which ranges from 17 to 27 percent on standard goods. Unlike a sales tax that’s collected at the point of final sale, a value-added tax is collected along the supply chain. Yang claims this would generate $800 billion in extra revenue.

The two other sources of funding relate to further cost savings from a basic income. Yang cites statistics from the Roosevelt Institute, which projects $2.5 trillion in economic growth and 4.6 million jobs, which in turn would lead to up to $600 billion added revenue. The final source of $200 billion would come from health care, incarceration and homelessness savings, as people could use the money to avoid harder situations.

Despite these calculations, basic income has many critics unconvinced by its benefits. Economist Milton Ezrati dismissed it as a “thoroughly wrongheaded idea,” adding that it would “constitute a partial transfer from the old to the young” as a replacement for Social Security. A paper from the National Bureau of Economic Research last month argued that even eliminating spending on other programs would still require major government expenditure. Beyond the costs, digital theorist Douglas Rushkoff last month questioned whether the policy detracts from issues like a fairer wage for workers, enabling firms like Uber to continue following the same business models.

Whether Yang will be able to convince others that the United States can afford a basic income remains to be seen.

More like this
Innovation
13 hours ago
“Quantum materials” could give the human brain a run for its money, scientists say
By Nathaniel Scharping
Innovation
8.9.2022 11:00 AM
This self-healing material could fix your dinged-up car in 30 minutes
By Molly Glick
Innovation
8.8.2022 10:00 AM
A wild new plane-train hybrid could whoosh you to your destination — if it can get off the ground
By Molly Glick
Share: