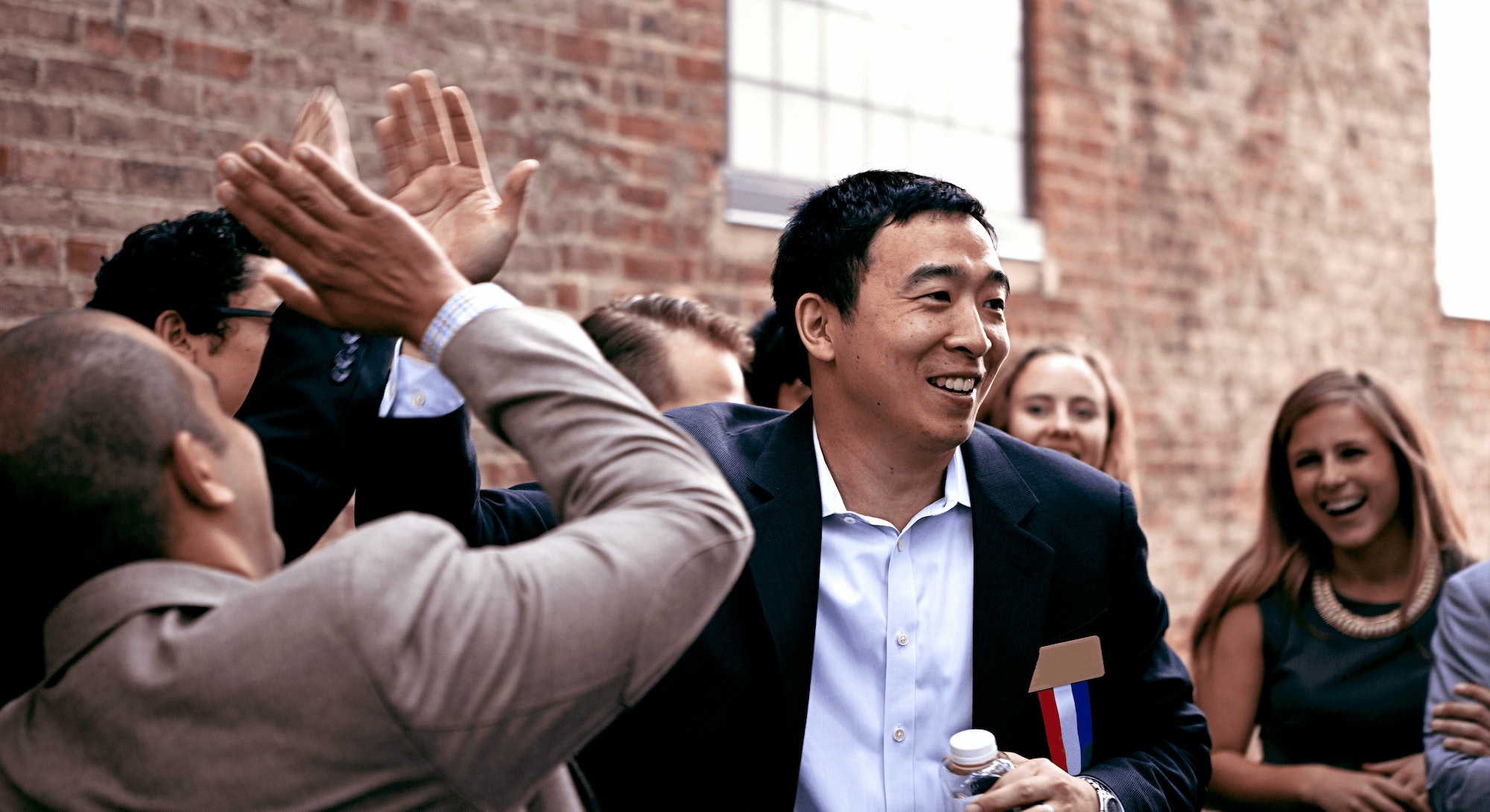 Andrew Yang, a man who has never run for public office in his life, is running for president on one of the most ambitious Democratic Party platforms since FDR. Right now, he’s in the middle of a campaign tour, closing out a stint in New Hampshire and getting ready to jet to New Orleans.

Answering the call for a new Marshall Plan — an A.I.-focused New Deal — Yang is the 43-year-old voice in a movement that wants to protect the American worker from the throes of robot automation.

“I get frustrated when people talk about this as if it’s all speculative,” Yang tells Inverse. “I spent the last six years walking the midwest of this country, and if you go to Cleveland, or Youngstown or Detroit, automation is just as real as if you were to go to Alaska and find a melting glacier and say that climate change is real.”

This fight’s personal for Yang. The War on Normal People, his book released April 3, describes how he experienced racist bullying as an Asian-American kid living in upstate New York. This pushed him to stick up for the marginalized, an ethos Yang says is central to his personal and professional life.

After selling medical records firm Manhattan Prep in 2010, Yang used $120,000 to start Venture for America with a goal of developing 100,000 job roles by 2025, roles for college graduates to work with startups in other cities. And yet, eight years and 2,500 jobs later, Yang can’t shake the feeling that something is fundamentally wrong outside of the Silicon Valley bubble.

As I crisscrossed the country, I often found places that seemed to be in the midst of long-term decay. I ate in diners where I was one of very few customers they’d see all day, drove past boarded-up businesses and ‘For Sale’ signs, walked into derelict buildings and factories, saw the looks of resignation on people’s faces. The overall feeling was one of defeat. The entrepreneurship message of ‘take risks’ and ‘it’s okay to fail’ seemed ridiculous and misplaced in many of these contexts.

It was when he read a CNN article that it clicked. Robot automation eliminated millions of jobs between 2000 and 2015 — four times more than globalization. Those derelict buildings were a sign of a monumental failure. He needed to solve this.

Basic income has a rocky history in the United States. Silicon Valley tech startup Y Combinator announced a small-scale Oakland trial that concluded last year, and a randomized trial of 3,000 people is set to start later. The private sector has picked up the slack on basic income because the vast majority of states have balanced budget amendments, making small-scale trials hard, and the federal government has shown little interest in the idea.

“To me, it’s an embarrassment we’re relying on private entrepreneurs and philanthropists to initiate these trials, when this is clearly a domain that the government should be actively leading in,” Yang says, citing previous trials that took place in the Sixties and Seventies. “We’ve just forgotten what government leadership looks like.”

Central to Yang’s presidential campaign is the Freedom Dividend, a $1,000 per-month payout to every adult between the ages of 18 and 64. Work status and other payouts do not affect the dividend, but payouts won’t start until age 20 for people that didn’t graduate high school, and people can choose to retain their existing benefits if they prefer.

Yang would pay for this by implementing a value-added tax at half of the European level, which would bring between $700 billion and $800 billion in revenue, as well as through $500 billion in savings from income support, welfare and disability. Yang also claims the country would see $2.5 trillion in economic growth from such a scheme, and reduction in the $1 trillion spent on healthcare, incarceration and homelessness would help meet costs.

The dividend is not just a cash handout. It’s a step to rewiring American attitudes toward labor. Yang proposes an alternative currency called “digital social credits” that would reward people for volunteering at a shelter, coaching little league, and other tasks important to a community but don’t involve cash transactions. It could be a cryptocurrency (Yang is also interested in how the blockchain could enable voting via smartphones), but it could also work more like a points system of an online community.

“You could have an army of displaced truck drivers installing solar panels!” Yang enthuses. “The problem right now is the United States doesn’t have any market mechanisms to reward those things or make them possible.”

Yang is not a single-issue candidate, he says. He’s also running to implement single-payer healthcare, either through expanding Medicare or through a new healthcare system. His third major policy is called “human capitalism,” and it’s based on three central tenets: humans are more important than money, the unit of a human capitalist economy is each person rather than dollar, and markets exist to serve the country’s common goals and values.

It’s a platform that echoes Bernie Sanders’ campaign for the Democratic nomination in 2016, which he narrowly lost to Hillary Clinton. Tapping into a youth with shrinking prospects in the wake of the 2008 financial crisis, Sanders’ brand of democratic socialism bore more than a passing resemblance to Yang’s human capitalism. Sanders has always preferred to focus on a universal standard of living than a universal basic income, with policies like a $15 minimum wage to improve the lives of workers.

“He and I are aligned on [healthcare] and a number of other issues,” Yang says, “but I do think I have a very different lens. I’m a serial entrepreneur and someone that has worked with technology for decades, and I think that many of the issues of today really are borne of the fact we’re going through the greatest technological and economic shift in history, and I’m more attuned to those issues.”

This “different lens” has helped Yang lift focus on a shift bubbling away behind the closed doors of pristine tech labs. Yang spoke with a Silicon Valley engineer in February from a major autonomous truck firm who claimed his team has reached a 98 percent level of confidence in the system with most normal situations. Beyond improvements to the autonomy, one idea under consideration is employing a team of human drivers in an office to take over when the truck encounters an error. Morgan Stanley estimates automating the role would save $168 billion each year for corporations, and the tech industry expects to make a breakthrough in the next two to 12 years.

Lost in the industry’s excitement over autonomous semi trucks is the fact that trucking is the most common job in 29 U.S. states, and these people are going to lose their jobs.

“In a better world, we would all be celebrating the liberation of hundreds of thousands of middle-aged men from having to be trapped in a truck going across America back-and-forth for 11 hours a day to the detriment of their health, their family lives,” Yang says. “We could be celebrating truck driver liberation day!”

Yang is already getting the community excited. His recent Reddit AMA garnered more than 4,000 comments, with users pressing him on issues like space exploration (“very pro”), private prisons (against) and the Second Amendment (“sensible gun control”).

The basic income subreddit is filled with followers declaring their support for a man that could help unify the movement into a serious electoral force.

“He sees what all politicians need to start seeing, that automation isn’t just around the corner; it’s already here; it’s been here for decades, and its effects will only get worse until we decouple income from work with [universal basic income], or what he calls a Freedom Dividend,” Scott Santens, a basic income advocate and moderator of the cause’s subreddit, tells Inverse. “I can’t speak for everyone, but I don’t think I’m alone in the UBI movement in being excited about a U.S. Presidential candidate running on UBI as a central tenet of his policy platform.”

Yang faces an uphill battle, having never held elected office. That didn’t stop Donald Trump in 2016, nor did it stop Emmanuel Macron in France the following year. Instead of seeking to run government like a business as in the other two cases, though, Yang seems more interested in using his Silicon Valley experience to help government combat its worst excesses. Time is running out.

“As a society, we have not advanced far enough to help make these developments positive for the affected people, but we can get there,” Yang says. “We need to get there. The alternatives are very, very dark.”