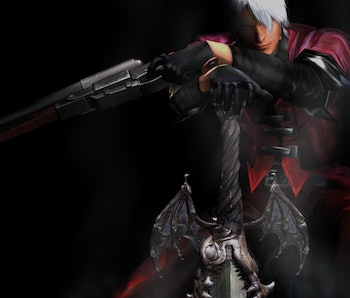 After The Matrix, the image of pop culture action heroes took a left turn. Neo wasn’t a bulging meathead like Schwarzenegger and Van Damme. He was a slim, dexterous, sometimes brooding/sometimes snarky punk in a long coat. It was a step towards the superhero that would be the standard some ten years later, but in 2001 all that mattered was how badass you looked.

Dante looked badass, because he was.

The protagonist of Capcom’s Devil May Cry, Dante lived up to the title. Outfitted in a long crimson leather coat, he rocked hair as silver as the blade of his broadsword with two guns that never ran out of ammo. Dante was your avatar of strength in a world replete with hope.

Hideki Kamiya’s premiere Devil May Cry for the PlayStation 2 raised the bar for the hack-and-slash action genre. It did so because of several smart decisions they kind of stumbled upon. The first decision: The camera.

Because of its development rooted in Capcom’s horror series Resident Evil, Devil May Cry took those static wide-angle camera and swooped in like a Michael Bay movie, allowing you to see more of the action. Today this camera is dated, and in fact this once-revolutionary invention was criticized when Devil May Cry was rereleased in an HD package in 2012. But in 2001, it was the shit.

Second decision: Making demon slaying cooler than it already is. In development by Capcom at the time was Onimusha: Warlords, which contained a glitch that would be Devil May Cry’s boon: if a player slashes an enemy repeatedly, they stay in the air, basically being “juggled.” Kamiya quickly put that in Devil May Cry, giving exactly what he wanted of the game wanted: style.

Hack-and-slash games are inherently a power fantasy, giving you a rush in super quick bursts. Because of its emphasis on just plain looking cool, Devil May Cry was cool.

And it all goes back to Dante, played by Reuben Langdon. The son of a legendary demon knight and a human woman, Dante is a mixed-race badass who has sworn his life to the eradication of all demons. Quick with a quip as he is with a trigger, he has been lauded by critics as setting the template for the “smartass action hero” that would follow him at the turn of the 21st century.

In 2013, Capcom hit the reset button on the franchise with DmC: Devil May Cry, with development handed to western developer Ninja Theory. With over a decade since the first game, pop culture’s heroes had changed once again, the gritty realism of Christopher Nolan’s Batman having shifted the paradigm. The new Dante reflected that: short black hair and an even shorter jacket, a mouth that was less mouthy and more dickish. Though gamers weren’t into Dante’s new look at first, including Hideki Kamiya, the game was warmly received, as was Dante’s new persona.

Perhaps it was the genuine “devil may care” ethos of the original game’s era, the last years of gaming that didn’t preoccupy with pretension. Before the dawn of binary moralistic choices and the complex storytelling that gave them meaning, when gaming only had to be good and different to make a mark. Devil May Cry was that kind of good and different, and it left a mark that lasted for a generation.

More like this
Mind and Body
Feb. 6, 2023
Overthinking? This New Kind of Therapy May Finally Provide An Antidote
By Elana Spivack
Science
Jan. 28, 2023
How does the placebo effect take hold? A doctor explains two influential factors
By Kathryn T. Hall. and The Reader
Gaming
Feb. 5, 2023
Super Dodge Ball is a Delightful Hidden Gem on Nintendo Switch Online
By David Grossman
LEARN SOMETHING NEW EVERY DAY.
Related Tags
Share: