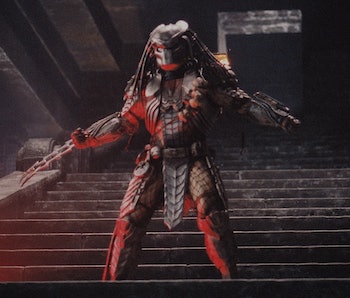 Last year news broke that Shane Black was developing a Predator sequel for 21st Century Fox. The beast with a face for radio is getting a modern day makeover. Do we necessarily need to know what happens next in the predator’s journey? Not especially, because there’s no more secrets left to uncover buried deep in the recesses of its mythology. In the five features and numerous comic book, video game, and novelization spin offs, the background to the sporting race of technologically-advanced aliens has been thoroughly exhumed and trotted out. It doesn’t quite possess the same mystery as its closest onscreen rival, the xenomorph (after six movies, we’ve still yet to see their home planet.)

Seeing as we’re getting a Predator sequel, whether we like it or not, it at least makes sense that the studio is entrusting the property to someone with vision. Shane Black started off strong when he wrote Lethal Weapon on spec, adopting a unique screenwriting style that separated him from his peers. It still stands today as a sterling example of how to write a brilliant action comedy. And like all good trendsetters, it spawned countless knock-offs.

Fox giving him free rein on Predator raises a few issues. Firstly, does the studio even care about the franchise? It held a tight grip on Alien until Neill Blomkamp spilled his concept art for a proposed sequel all over Instagram and the internet got hype for his adaptation. Hello, greenlight!

Predator, on the other hand, hasn’t seen that scale of fan fervour. The last time it was yanked out was in the 2010 sequel Predators that, despite being a far, far better installment than Predator 2, was drubbed. Sure, it makes a few pitfalls (not killing off Topher Grace before the opening credits) but it’s not deserving of its bad reputation.

Black’s experience is about as far from the monster movie milieu as you can get. Fast-paced quips and broad action strokes are his forte. So either Fox realizes that Black’s skills could birth a brand new franchise - yip-fucking-ee - or they’re letting him run free ‘cause they’re bound to make bank even if it’s terrible. Which seems an unlikely outcome bearing in mind his knack for reinventing genre in the subtlest, coolest way possible. The film’s producer John Davis thinks that it’s the former, and his recent comments to Collider on Black’s first draft reinforce that idea:

“I think it’s genius and I think it’s entertaining, and what it did is recreate a famous franchise in a different, interesting way; looking at it from a different light. He’s just an amazing writer-director. He’s got a way of looking at this that makes you excited again.”

Different light, interesting way, making a famous franchise exciting. We’ve heard all of this talk before and look how that turned out. Before we throw the extraterrestrial out with the bathwater, he offers a smidgen of hope:

“Shane’s got a writing partner, Fred Dekker. They’ve been doing it together and Fred’s great.”

“The two of them together, they’ve been in the business for a long time, but the writing is so fresh, the perspective is so fresh. I’m telling you you’re going to get something you don’t expect and you’re going to say, ‘This is the most entertaining way to reinvent a franchise.’ I mean he’s the guy who wrote Iron Man 3.”

Drawing conclusions from his hyperbolic comments - that sound remarkably like smoke being blown up one’s backside - it’s going to be different, fresh, and entertaining. Whether it’ll adhere to the first two adjectives, the latter is the perfect word to describe Black’s movies. You can find fault with his movies for their appropriation of violence into a source of amusement, but who didn’t dig seeing Geena Davis kick ass and chop vegetables faster than a Top Chef in The Long Kiss Goodnight?

Or watching Bruce Willis KO Tig from Sons of Anarchy in The Last Boy Scout :

Prior to donning the Iron Man armor, Robert Downey Jr. scored one of his best roles to date in Black’s Kiss Kiss Bang Bang. That film too spun the neo-noir movies of yesteryear into a movie where — to borrow Davis’ words again — “the writing is so fresh, the perspective is so fresh.” A Hollywood murder-mystery wrapped up in quirky narrative leaps, fourth wall-breaking voiceover, solid characterizations, witty dialogue… the proof’s in the pudding.

Say what you will about the finished product of his scripts. It can’t be denied that he’s written some truly great dialogue and created a bunch of inherently watchable characters over the years. The same cannot be said for the Predator franchise. This vast chasm of difference makes him an inspired choice to inject the sequel with the presence of actual human characters who behave like normal human beings.

So, whatever he chooses to do with the creature that first stalked Arnie and his crew in the 1987 original, and however he intends to freshen up the franchise, I’ll be there opening night.