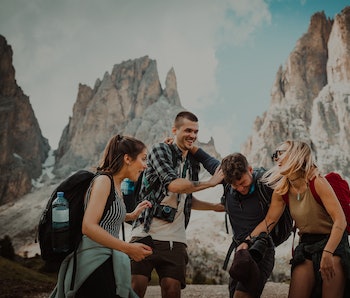 Who’s happier, men or women? Research shows it’s a complicated question and that asking whether males or females are happier isn’t really that helpful, because essentially, happiness is different for women and men.

Women’s happiness has been declining for the past 30 years, according to recent statistics. And research shows that women are twice as likely to experience depression compared with men. Gender differences in depression are well established, and studies have found that biological, psychological, and social factors contribute to the disparity.

But research also shows that women are more likely to experience intense positive emotions — such as joy and happiness — compared to men. So it seems that women’s more intense positive emotions balance out their higher risk of depression. Research also shows women are more likely to try and get help and access treatment — allowing them to also recover sooner.

See also: To Land a Job, Women Need to Be Much Better Networkers Than Men, Study Says

Early studies on gender and happiness found men and women were socialized to express different emotions. Women are more likely to express happiness, warmth, and fear, which helps with social bonding and appears more consistent with the traditional role as primary caregiver, whereas men display more anger, pride, and contempt, which are more consistent with a protector and provider role.

Recent research suggests that these differences are not just social, but also in the brain. In numerous studies, females score higher than males in standard tests of emotion recognition, social sensitivity, and empathy.

Neuroimaging studies have investigated these findings further and discovered that females utilize more areas of the brain containing mirror neurons than males when they process emotions. Mirror neurons allow us to experience the world from other people’s perspective, to understand their actions and intentions. This may explain why women can experience deeper sadness.

Psychologically, it seems men and women differ in the way they process and express emotions. With the exception of anger, women experience emotions more intensely and share their emotions more openly with others. Studies have found in particular that women express more pro-social emotions — such as gratitude — which has been linked to greater happiness. This supports the theory that women’s happiness is more dependent on relationships than men’s.

However, within these studies lies a significant blind spot, which is that women often do feel anger as intensely as men, but do not express it openly as it is not viewed as socially acceptable.

Studies show that men have greater problem solving abilities and cognitive flexibility which can contribute to greater resilience and positive mood. Women’s reactivity to stress makes it harder for them to challenge their thinking at times and this can exasperate symptoms of low mood.

This inequality of happiness means that it is harder for women to maintain a happy state when faced with social expectations and constraints. Research into stress shows that women are more physically reactive to social rejection compared with men, for example. This means they are more likely to prioritize the needs of others over their own — and over time this can lead to resentment and feeling unfulfilled.

Females in general prioritize doing the right thing over being happy, whereas men are better at the pursuit of pleasure and hedonism. Studies have also found that women tend to act more ethically than men and are more likely to suffer feelings of shame if they are not seen to be doing “the right thing.” But female morality also leads them to engage in more fulfilling and impactful work. And this ultimately brings them greater joy, peace, and contentment.

As you can see, it’s a complicated picture. Yes, women are more sensitive to stress, and more vulnerable to depression and trauma, but they are also incredibly resilient and significantly more capable of post-traumatic growth compared with men. Studies show that this is due to their sociability and ability to connect at a deeper level with others, both male and female.

It’s also important to recognize that despite these differences, the benefits of happiness are far-reaching for both women and men. And that research shows happiness is not merely the function of individual experience but ripples through social networks. Happiness is infectious and contagious — and it has a positive impact on the health and well-being of everyone.

This article was originally published on The Conversation by Lowri Dowthwaite. Read the original article here.