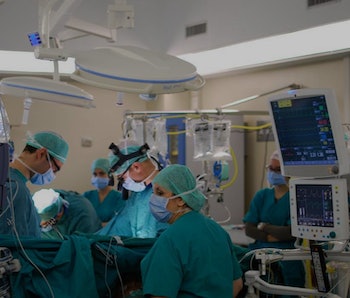 Instead of reaching for the oxycontin, a team of London researchers suggests putting headphones on instead. Music, they say, is the cheapest and safest painkiller out there.

In their study published in The Lancet, the team found that patients who listened to music before, after, and during surgery had less anxiety and physical pain post-op. They left the hospital feeling happier and didn’t need as many prescription drugs to deal with post-surgery discomfort.

Over 7,000 patients in 73 trials were asked to rate their pain level on a scale of one to ten after surgery. On average, those that had listened to music at some point in the surgery experience felt two fewer “pain points” than those who hadn’t.

It isn’t clear why music has this numbing effect, but the researchers think it has something to do with keeping the mind occupied, distracting patients from the pain. Even patients that heard music while they were under general anesthetic felt its effects.

“Music is a non-invasive, safe, and inexpensive intervention that can be delivered easily and successfully,” the researchers wrote. Normal painkillers are addictive and costly, but they’re a necessary evil when you’re going through surgery. With music therapy, we can at least reduce our dependence on them.

The researchers didn’t specify what music helped most, but they did suggest that patients should get to choose what type they wanted to hear. If you’re stressing about going under the knife anytime soon, here’s an Inverse-approved track to help you keep your chill.