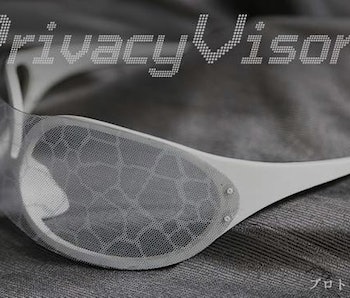 As modernity continues its steady transition to an IRL Matrix of constant surveillance, one Japanese company says it’s developed a pair of glasses that can scramble facial recognition systems with as much as 90 percent accuracy.

The Privacy Visor will hit Japan’s market in June 2016 with a $240 price tag, The Wall Street Journal reports. Designed by the government-affiliated National Institute of Informatics and an eyeglass maker, the glasses have a special lens that reflects and absorbs light in such a way as to scramble recognition systems.

In the United States, talks between corporations and privacy advocates have been at a stalemate over the mere concession to let people walk around in public without being surveilled. The next step could be consumer counter-surveillance tech, an industry niche with an obvious market of people who prefer not to show up in multiple government and corporate databases simply by stepping outside. In the immediate future, though? A guy wearing these in public would seem, for the time, like a suspicious customer.