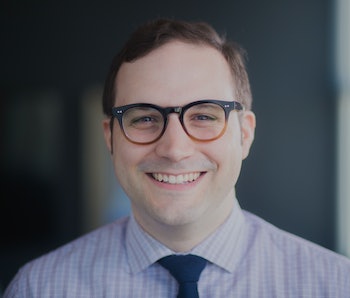 John Teti faces a bit of a conundrum. Because he’s a senior editor at The A.V. Club, media consumption is a job requirement. Teti, as of late, mostly specializes in television, video games, and — of all things — football. He will write a massive, magnificent recap of the Mad Men finale one day and film a hilarious video comparing True Detective to Game of Thrones the next.

But where does the day job end and his life of leisure begin? “We joke here that The A.V. Club is where all of your pleasure turns into work,” Teti says. “If I’m watching something for fun, it’s hard to turn off that switch that says, ‘Oh, I could get a piece out of this! Or I could analyze this this way.’ I do try to turn that off, but it’s hard.” But Teti is a jack of all trades for The Onion’s media offshoot, and he will take on just about anything. “I like to write about Project Runway just as much as I like to write about NFL football,” he says.

Don’t buy his lowbrow bona fides? Check this out: “In my free time, I got hooked on Married at First Sight, a shitty FYI reality show that is what it sounds like: people get married at first sight. Look it up.” Still, Teti has a fairly cerebral way of looking at even the trashiest of shows. “I love to see the way that reality shows are put together. To me it’s about this tension between the producers of the show and the contestants. On a show like Keeping Up with the Kardashians, I feel like everybody’s in on it. On a show like Married at First Sight, I think you have people trying to shape their own story, and they get tossed into some maw of the editors who can do whatever they want with that footage.” Then, the two of us talk about UnReal for a while.

He does watch “all the HBO stuff” even if he thinks The Brink is “a little terrible.” He also points to Masters of Sex before saying, “I love Halt and Catch Fire, even though it might be canceled.” He goes on about his favorite television, saying, “My TV comfort food is game shows. I have Price Is Right on DVR always and I love to watch old game show reruns on Game Show Network and this new network called Buzzr.”

There’s a heated debate going on about whether or not we’re living in the “golden age of television” and how the current film front is holding up. I asked Teti for his take. “If you assess any medium by its whole breadth, most of it’s going to be shit,” he explains. “I do go to the movies fairly regularly, but I don’t find the movies that I go to see interesting or stimulating as a good TV series. I think, at least in the United States, TV is the more vibrant art form right now.”

As for the video game side of his life, he’s excited about the upcoming releases of Everybody’s Gone to the Rapture and No Man’s Sky, but regrets that he doesn’t have the time to play them as much anymore. “The tough thing about video games is they’re so time-consuming,” Teti says. “You have to pour dozens of hours into a game to be able to get a review out of it. I think that’s why a lot of video game reviewers have relatively short careers.”

Next on his list are indie comics. He was recently in Ann Arbor, Michigan, where he picked up an issue of Palookaville and a Maakies compilation. “I have a pretty good comics collection,” Teti explains. “But, even with comics, the mainstream stuff from Marvel or Dark Horse: I’m reading that stuff on my iPad.”

Teti is an Apple news junky and checks blogs like Six Colors, Loop Insight, Daring Fireball, and MacInTouch for the latest iUpdates. He goes to The New York Times, The Washington Post and The Los Angeles Times for politics et al. Though, he says, “I’ve never lived in L.A. and have no desire to do so. I guess I just want to know what’s going on out in California.” Which is probably a pretty good idea for a TV writer.