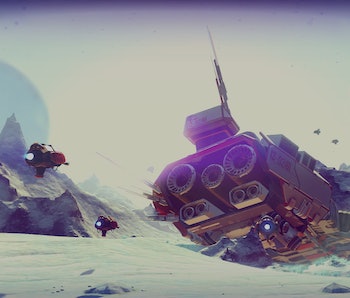 At a certain point — tomorrow perhaps, or at the edge of never, or 25 years from now, or the day after you die, or maybe Christmas 2016 — humans will meet up with sentient life from another world. We'll be starstruck (little pun there; it's a thing we do on this planet) and then we'll be afraid and then we'll stammer in profound wonder. Religions will collapse; governments will scramble; civilization will buckle from the shock.

Once we all calm down, we’ll have nothing but time in front of us, and guests to entertain, with not even so much as a Lonely Planet (heh, doing it again) phrasebook to help us make small talk.

So we’ll sit these beings down and show them our best efforts at the languages we already know, from our experience on Earth, to be veritably universal: music, mathematics, art, athletics. And we’ll have the likes of No Man’s Sky, the almost literally endless game of interstellar exploration. Its release, anticipated since 2013, will come later this year, The New Yorker revealed today in a feature about the game and its creator, Sean Murray.

The feature includes a video that you should watch for a calm, atmospheric explanation of the game’s environments and physics; for a more thorough lecture on its features, the TGN video here should suffice. The takeaway, though, is that the universe of No Man’s Sky isn’t appreciably smaller than the actual universe. As Raffi Khatchadourian puts it in The New Yorker: “No Man’s Sky will, for all practical purposes, be infinite. Players will begin at the outer edges of a galaxy containing 18,446,744,073,709,551,616 unique planets. By comparison, the game space of Grand Theft Auto: San Andreas appears to be about fourteen square miles.”

When we commune with alien visitors, the more relevant point of comparison will be outer space itself. Astronomers’ best guess is that the universe contains something on the order of 7x10^22 stars. No Man’s Sky isn’t really all that close, but it’s in the ballpark, with 1.8x10^19 planets. More to the point, it is all about exploring those worlds, shuffling from planet to planet, skating through asteroid fields, checking out made-up animals on acid-trip landscapes. If extraterrestrial visitors have any similarities to humans whatsoever — if they’re not spores, or energy-based, or four-dimensional, or unable to process our visible light spectrum, or not big fans of indie games’ feel generally — then they should intuit what this is all about. They will make up consonant-dense user handles and claim algorithmically generated worlds for their own, claiming new ships and exploring bizarre atmospheres and topographies. They’ll grok. Then we’ll show them differential calculus and our paltry list of known prime numbers and they’ll politely laugh their asses off at us, as friends can do and still be totally cool about it.

More like this
Science
9 hours ago
Artemis SLS on the launchpad and more: Understand the world through 7 images
By Robin Bea
Science
8.17.2022 6:00 PM
Watch squealing dolphins hunt fish and snakes from their point of view
By Jennifer Walter
Gaming
8.17.2022 5:50 PM
FFXIV players are obsessed with an IRL rooster, and the fan art is amazing
By Robin Bea
Related Tags
Share: