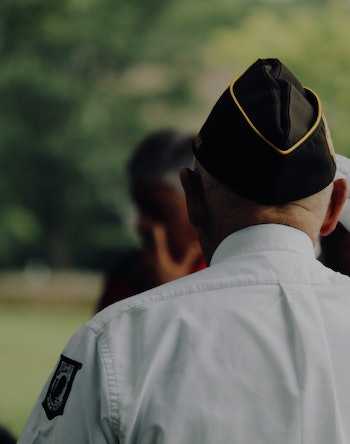 Laura Reilly is a 15-year-old from San Antonio, Texas. She’s a Girl Scout, and as part of that duty, she volunteers at her local VA hospital. Reilly is also passionate about science and, for as long as she can remember, has wanted to become a physician. One day, like molecules aligning to form a strand of DNA, these facts of Reilly’s life came together in harmony to spur something new — an idea for how she could help injured veterans.

“I noticed that a lot of veterans have wounds, cuts, and burns,” Reilly tells Inverse. “That made me wonder, how can I help these veterans?”

Reilly remembered reading research about the use of ultraviolet light and tilapia skin to improve wound healing. Specifically, she thought of a case she came across in which bears injured in California’s wildfires were experimentally treated with tilapia skin — which, being a fish skin, contains collagen, a protein that is not only antibacterial but can also assist in healing. Bears whose burns were treated with this remedy had wounds that healed in just a few weeks, rather than the anticipated six months. Reilly figured that if this unique therapy could work for the bears, it could likely work for people.

But like any good scientist, Reilly knew she needed to do more experimentation before jumping to human subjects. So she began her own research — a journey that led her to eventually be a part of Broadcom MASTERS, a national science competition for US middle school students. Annually, 4,000 student scientists are selected from science fairs around the country. This nominated group is then whittled down to 300 people, and then 30. Reilly was one of those select 30, the only student who represented Texas.

Her experiment, which brought her to the Broadcom MASTERS finalist competition in Washington, D.C., this October, specifically examined how injured flatworms exposed to UV light and tilapia skin would react. Reilly set up two groups — one containing flatworms with cuts and another containing flatworms who had been burned. Some flatworms from each group received the treatment. For 24 days, she monitored the flatworms’ length, movements, and whether or not they survived.

In the end, she discovered that the health of both groups of injured flatworms, when they received the combination of tilapia skin and UV light treatments, improved. They were able to recover from their injuries at a faster rate than usual — and they grew longer in the process.

When asked whether this experiment took place at school, Reilly responded: “Oh no ma’am, this project has been at home in my bathroom.”

And that’s one of the many special things about Reilly — she knows how to make it work. Until recently, her middle school didn’t have the resources to participate in a science fair. So, with the help of her mother Sandra — a geriatrician whom she says “has always been an inspiration to me” — Reilly started a STEM club at her school in 6th grade.

“We only started out with a couple of kids, and now we have almost 50 kids in the club,” Reilly says. “It’s been a pretty incredible experience.”

Journeying to D.C. for Broadcom MASTERS was a special experience as well. During the event, she got to participate in smaller science competitions and tests and go to Capitol Hill to talk to her state representatives about science. She was also able to meet other students from around the country, which she says “truly opened my eyes to other fascinating science projects.”

When Reilly isn’t working on science projects, she dances, swims, and plays piano. She loves to read and is studying Mandarin Chinese — which, once she learns it, will be the third language she speaks, along with English and Spanish. She’s “keeping her options open” when it comes to college, but she knows that she wants science to be a big part of her future.

Right now, she’s looking for a mentor to further her research in invertebrates and eventually humans. She’s at an early stage in this project but is eager to do more work and extend her time and energy to new projects.

“Research has always been a passion of mine — just investigating new things, finding a way to a solution,” Reilly says. “Science is pretty amazing in itself, but I want to use it in a way to help people.”