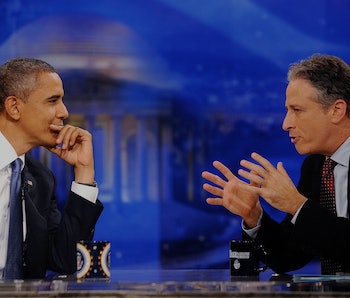 Every generation has cultural touchstones, references, and shared experiences that make for automatic conversation topics. My generation’s touchstones include answering where were you during 9/11 with some variation of I was in math class or I was at recess, the transition into an everything-on-the-record social media age, Harry Potter and the decade when lining up in bookstores at midnight was A Thing, [the golden age of TV](https://en.wikipedia.org/wiki/GoldenAge_of_Television(2000s%E2%80%93present), the era when school shootings became normative, the age of superhero movies and Comic-Con culture, our continuous involvement in wars nobody could explain coherently …

… and Jon Stewart. Stewart is departing The Daily Show on Thursday, after 16 years. Maybe you just tuned in occasionally when he had a particularly interesting interview or on-point takedown, or maybe this will mark the end of how you receive and process news, and you’ll now have to forge ahead into the unknown. Stewart was the most trusted fake-news voice behind a fake-news desk, our Walter Cronkite, and his departure will leave behind a gaping absence. To wit: Fake news or no, Stewart’s set will be donated to the Newseum after his last broadcast.

He does leave behind a legacy of former colleagues and understudies, none of whom is likely to quite replace Stewart. The closest at the moment might be former Daily Show correspondent John Oliver, whose HBO show does actual journalist investigations and delivers them as comedy bits on Sundays.

He’s just as sharp, hilarious, and necessary to the world, but, unlike Stewart, he rarely eviscerates the daily American political circus and the media’s ludicrous coverage of it.

But The Late Show is more about entertainment than politics. Though Daily Show host-in-waiting Trevor Noah may try, nobody else is Jon Stewart. Nobody wields his unique and particular brand of wit, humility, and curiosity — like when he laid out gender politics in our country in one hilarious, sad, accurate segment:

Or when he shut down climate change deniers with a fourth grade level science demonstration:

Or when he tore apart the arguments that systemic racial inequality is not a thing:

Or the myriad of instances in which he used a pundit’s own clips to illuminate hypocrisy:

Jon Stewart gave a voice to the sensation so many of us have when we watch the news: a mixture of alienation, despair, and incredulity when we see what elected officials are doing and what media outlets are covering — even the news stations that aren’t totally divorced from reality. Stewart is our voice of reason for when we go, Am I hallucinating? People who are supposed to be ruling don’t believe in science?? Is this real? Am I on crazy pills?

For many of us who watched Stewart during our politically formative teenage years, he was there to offer levity with just a quirk of an eyebrow, almost as an extra parent. He celebrated skepticism and critical thinking in an age of aggressive unreason. Also, he was consistently hilarious.

To examine how Stewart became such an icon and what might happen now, I spoke with Joe Cutbirth, a journalist, editor of the Texas Observer, and a media critic who has discussed journalism and satire with The New York Times, the BBC, the Globe and Mail, and others. You can read his Ph.D. thesis, Satire As Journalism: The Daily Show and American Politics at the Turn of the Twenty First Century here.

Inverse: What do you think Jon Stewart has done for American politics?

When Stewart had the Rally To Restore Sanity, I went and introduced myself to people who were there. I told them I was doing a sociological thesis on Stewart for Columbia and I asked them why they were there. They’d say, “I’m really concerned about the future of our country.” I’d say, “then why aren’t you helping in the electoral process? Making phone calls for your party?” and they’d look at me like they weren’t sure why I asked that. Listening to a standup comedian made them feel more engaged. That shows the disconnect people feel around the political system these days. That’s the real magic around Stewart. He made people feel connected, made them engaged in politics again.

Why do you think satire is important?

It gives the powerless a tool to punch the powerful, and that’s critically important in a free society. Satire is a form of commentary where the powerless comes up at the powerful. When the more powerful makes fun of the powerless, that’s just called bullying. This idea of lampooning the powerful is incredibly important. This goes back to the Catholic Church in the Middle Ages. If people are smart, they let it happen. It lets off social tension. Otherwise, it builds, and people build bombs.

When people feel powerless, they tend to do one of two things: they form a group, like the Black Panthers or the Tea Party, or they find a spokesperson. Forty years ago, people gathered around the water cooler and said, “did you read the New York Times?” now they say “did you see Jon Stewart?” Stewart used humor as a tool to cut to the chase in the way that nobody else was. I argued this passionately early in my work. I didn’t believe he was doing political satire; he was doing media satire. He was satirizing the impotence of our national press.

What do you think the media was lacking? Where did Stewart succeed where they failed?

I believe Jon’s success comes from the fact that he was punching up at corporate media. The reactions he does, like rubbing his fingers in his eyes after watching a clip — by doing that he connects to the audience: You weren’t crazy when you saw Cheney tell Meet The Press that he never said there were weapons of mass destruction in Iraq. And then Stewart plays a clip of him saying there are weapons of mass destruction in Iraq. You look at it and think, “What the hell?” And Stewart says, They weren’t doing their job, and you’re not crazy for thinking it.

Who would you spend three hours listening to, Jon Stewart or Rush Limbaugh? Someone being angry and cruel or someone being funny and insightful? Satire gets under people’s skin and sends a message. Powerful people pay attention to satire. It’s a very magic formal conversation.

What do you think the future holds for Stewart? His legacy?

I think he’s done an amazing thing for this country. He’s revitalized our political discussion; he’s shown us ways to talk and think about politics that we’d forgotten. I don’t believe he’s irreplaceable, any more than Walter Cronkite or Mark Twain or Hunter S. Thompson. They’re unique, iconic, great, groundbreakers — but life goes on. I’m sure he’ll be around, picking his moments.

What do you think are some of Stewart’s best moments?

I thought Jon Stewart’s engagement of Jim Cramer, the guy who did Mad Money — only very few times has Stewart really stepped out and hit something really head on. And it was about a four-day thing. Cramer went on the Today show and then realized Stewart couldn’t be dismissed. He went on Stewart’s show, and they really got into it. Jeff Zucker, who was president of NBC, was cornered at a meeting, and his response was ‘Jon is not being fair.’ I thought, what a telling moment — the head of one of world’s biggest organizations thinks that humor is supposed to be fair. When he said that, I was like, ‘Oh my god, you talk about people who don’t understand what Stewart is doing!’ Humor isn’t fair. Humor is an art. If someone laughs at a joke, you’re giving them a political alliance. That’s what he does and he does it well. That was such a pivotal moment.

What advice would you give to people in my generation who are sad he’s leaving?

Every generation has its icons. Sometimes they’re politicians, sports figures, people in entertainment. The journalist in me always said Jon Stewart would disappoint you at some point. Some scandal would come out. Look at Lance Armstrong, look at Cosby. But I’ll tell you, I’ve studied this guy for over 10 years, and he continues to amaze me. The thing I think is important about Jon and where he’s misunderstood is people think he’s an advocate for a liberal media. I think he’s an advocate for a virtuous media. I think he was angry the media wasn’t doing its job.