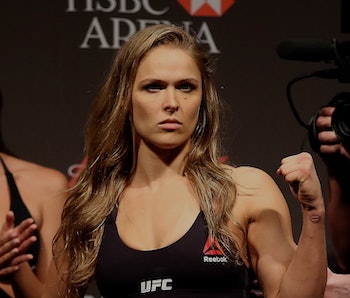 Ronda Rousey is everywhere, including now shilling for burger chain Carl’s Jr., the culinary equivalent of TruckNutz. The totally badass UFC Women’s Bantamweight Champ has signed on to hawk sammies for the California-bred grease slingers, no doubt a hire meant to appease those who view their previous commercial work as sordid. “Distasteful” is not a great corner of the market for a company selling food.

This barely concealed brotastic sexism has been the chain’s M.O. for years, and the inevitable backlash has finally gotten through. The ad above, for instance, was found to be offensive by 52 percent of viewers, while 51 percent found it irritating and annoying. And the 27 percent of consumers who said they planned to visit a Carl’s Jr. in the month after seeing the ad are 100 percent creepy.

As a man, I find Carl’s Jr. taste objectionable — the taste of its food! Zing. But, really, who can stomach its ads either? Remember this shameless play for viral status?

Nevertheless, this Rousey move is deft. Women find her empowering. Men find her intriguing, as a bona fide sex symbol they know could dislocate their elbows at whim. And, if you’re an ad exec, you know she can sell some Grade D beef in a quick spot if she can do this in 34 seconds:

It’s hard to trust ol’ Carl, though. While Rousey isn’t a bimbo to be displayed in some sort of asinine Cinemax-informed French fry phallus mash-up, she is an attractive woman. And what has Carl’s Jr. done with attractive women, time and time again? Exploited ‘em. Here’s to holding out hope that they go in a different direction with Rousey and, if they don’t, that she doles out some arm bars.