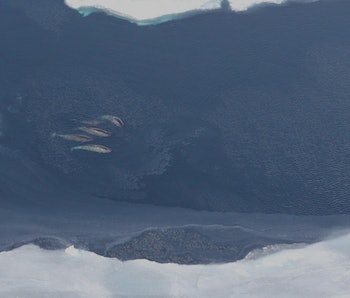 Most Americans associate fall with football and raking leaves, but in the Arctic this season is about ice. Every year, floating sea ice in the Arctic thins and melts in spring and summer, then thickens and expands in fall and winter.

With less sea ice, there is burgeoning interest in shipping and other commercial activity throughout the Northwest Passage — the fabled route that links the Atlantic and Pacific oceans, via Canada’s convoluted Arctic archipelago — as well as the Northern Sea Route, which cuts across Russia’s northern seas. This trend has serious potential impacts for Arctic sea life.

In a recent study, we assessed the vulnerability of 80 populations of Arctic marine mammals during the “open-water” period of September, when sea ice is at its minimum extent. We wanted to understand the relative risks of vessel traffic across Arctic marine mammal species, populations and regions. We found that more than half (53 percent) of these populations — including walruses and several types of whales — would be exposed to vessels in Arctic sea routes. This could lead to collisions, noise disturbance or changes in the animals’ behavior.

More than a century ago, Norwegian explorer Roald Amundsen became the first European to navigate the entire Northwest Passage. Due to the short Arctic summer, it took Amundsen’s 70-foot wooden sailing ship three years to make the journey, wintering in protected harbors.

Fast-forward to summer 2016, when a cruise ship carrying more than 1,000 passengers negotiated the Northwest Passage in 32 days. The summer “open-water” period in the Arctic has now increased by more than two months in some regions. Summer sea ice cover has shrunk by over 30 percent since satellites started regular monitoring in 1979.

Arctic seas are home to a specialized group of marine mammals found nowhere else on Earth, including beluga and bowhead whales, narwhals, walruses, ringed and bearded seals and polar bears. These species are critical members of Arctic marine ecosystems, and provide traditional resources to Indigenous communities across the Arctic.

According to ecologists, all of these animals are susceptible to sea ice loss. Research at lower latitudes has also shown that marine mammals can be affected by noise from vessels because of their reliance on sound, as well as by ship strikes. These findings raise concerns about increasing vessel traffic in the Arctic.

To determine which species could be at risk, we estimated two key factors: Exposure — how much a population’s distribution overlaps with the Northwest Passage or Northern Sea Route during September — and sensitivity, a combination of biological, ecological, and vessel factors that may put a population at a higher risk.

As an illustration, imagine calculating vulnerability to air pollution. People generally are more exposed to air pollution in cities than in rural areas. Some groups, such as children and the elderly, are also more sensitive because their lungs are not as strong as those of average adults.

We found that many whale and walrus populations were both highly exposed and sensitive to vessels during the open-water period. Narwhals — medium-sized toothed whales with a large spiral tusk — scored as most vulnerable overall. These animals are endemic to the Arctic, and spend much of their time in winter and spring in areas with heavy concentrations of sea ice. In our study, they ranked as both highly exposed and highly sensitive to vessel effects in September.

Narwhals have a relatively restricted range. Each summer they migrate to the same areas in the Canadian high Arctic and around Greenland. In fall they migrate south in pods to offshore areas in Baffin Bay and Davis Strait, where they spend the winter making deep dives under the dense ice to feed on Greenland halibut. Many narwhal populations’ core summer and fall habitat is right in the middle of the Northwest Passage.

The western end of the Northwest Passage and the eastern end of the Northern Sea Route converge at the Bering Strait, a 50-mile-wide waterway separating Russia and Alaska. This area is also a key migratory corridor for thousands of beluga and bowhead whales, Pacific walruses, and ringed and bearded seals. In this geographic bottleneck and other narrow channels, marine mammals are particularly vulnerable to vessel traffic.

Research in the harsh and remote Arctic seas is notoriously difficult, and there are many gaps in our knowledge. Certain areas, such as the Russian Arctic, are less studied. Data are sparse on many marine mammals, especially ringed and bearded seals. These factors increased the uncertainty in our vessel vulnerability scores.

We concentrated on late summer, when vessel traffic is expected to be greatest due to reduced ice cover. However, ice-strengthened vessels can also operate during spring, with potential impacts on seals and polar bears that are less vulnerable in September. The window of opportunity for navigation is growing as sea ice break-up happens earlier in the year and freeze-up occurs later. These changes also shift the times and places where marine mammals could be exposed to vessels.

Planning for a Navigable Arctic

Recent initiatives in the lower 48 states offer some models for anticipating and managing vessel-marine mammal interactions. One recent study showed that modeling could be used to predict blue whale locations off the California coast to help ships avoid key habitats. And since 2008, federal regulations have imposed seasonal and speed restrictions on ships in the North Atlantic to minimize threats to critically endangered right whales. These practical examples, along with our vulnerability ranking, could provide a foundation for similar steps to protect marine mammals in the Arctic.

The International Maritime Organization has already adopted a Polar Code, which was developed to promote safe ship travel in polar waters. It recommends identifying areas of ecological importance, but does not currently include direct strategies to designate important habitats or reduce vessel effects on marine mammals, although the organization has taken steps to protect marine habitat in the Bering Sea.

Even if nations take rigorous action to mitigate climate change, models predict that September Arctic sea ice will continue to decrease over the next 30 years. There is an opportunity now to plan for an increasingly accessible and rapidly changing Arctic, and to minimize risks to creatures that are found nowhere else on Earth.

This article was originally published on The Conversation by Donna Hauser, Harry Stern, and Kristin Laidre. Read the original article here.

More like this
Science
7.28.2022 11:00 AM
Artemis target launch dates and more: Understand the world through 8 images
By Robin Bea
Science
7.25.2022 7:00 PM
Humans wear cotton every day — now, the plant needs genetics' help to survive
By Serina Taluja and The Conversation
Science
7.24.2022 1:00 AM
Too hot to sleep? Why your nights are only going to get so much worse
By Stephen Burt and The Conversation
Related Tags
Share: