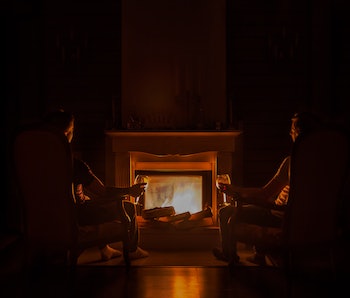 Even though it’s going to be a warmer-than-average winter, you can still partake in the bad-weather ritual of holing up at home with a good book. This year, prepare for the season’s start by squirreling away books that seek to answer the mysteries of the cosmos, the puzzles of the past, and indelicate questions about the perplexing present. In other words, head to the science section.

Here below are seven of Inverse’s picks for science books to nestle in with this winter:

How to Walk on Water and Climb up Walls

Roboticists tasked with designing the machines of tomorrow are inspired by the spectacular blueprints created by nature. In the book How to Walk on Water and Climb up Walls: Animal Movement and the Robots of the Future, author David Hu, Ph.D. dives into these all-natural plans and explains why they’re so useful to robot design. The way a snake slithers or a dog shakes off water, it seems, are far too valuable to take for granted. Hu, an associate professor of mechanical engineering and biology at Georgia Institute of Technology, brings readers along as he speaks with scientists about what they are learning from animals.

In the book Never Home Alone: From Microbes to Millipedes, Camel Crickets, and Honeybees, the Natural History of Where We Live, Rob Dunn, Ph.D. reminds us that even if we’re in blissful isolation reading a book, it is truly never a party for one. Dunn, a biologist and applied ecology professor at North Carolina State University, is not here to say there are a couple of spiders in your house. He’s here to straight up explain the nearly 200,000 species of microbes and bugs that want to be — or already are — your roommate. Cleaning isn’t the solution — it’s our obsession with sterilization, Dunn posits, that’s driving this invasion.

Hangovers have haunted humans since the invention of beer and will follow us like a dirty, drunk shadow until the end of our days. But there are a few hopefuls among us who say we are not doomed to that fate. In Hungover, journalist Shaughnessy Bishop-Stall tests out hangover cures like polar bear swims and saline IV drips in an effort to figure out how to make Sunday mornings a bit more sufferable. He sorts through the fact and the fiction so you don’t have to.

Thus Spoke the Plant: A Remarkable Journey of Groundbreaking Scientific Discoveries and Personal Encounters with Plants is a mouthful of a title, but it perfectly captures what this book is about. Author and evolutionary ecologist Monica Gagliano, Ph.D., poses a scenario that may seem more science fiction than science: Plants are capable of communication and cognition. Gagliano, a senior research fellow at the University of Western Australia and the University of Sydney, doesn’t make this conjecture without evidence — the book dives into her own research on plant learning processes and plant bioacoustics. A thought-provoking treatise on consciousness, this is Gagliano’s shamanic approach to ecology.

End of the Megafauna

A few thousand years ago, the Earth was home to giant sloths, 500-pound birds, and lemurs the size of gorillas. In the book End of the Megafauna: The Fate of the World’s Hugest, Fiercest, and Strangest Animals, American Museum of Natural History paleomammalogist Ross D.E. MacPhee, Ph.D., tells the tale of these gargantuan creatures and explains what factors led to their downfall. The beautifully illustrated compilation also dives into how scientists could resurrect these beasts and warns human readers how we could meet a similar fate.

Are we alone in this universe? Data collected from the Kepler mission hints that the answer is yes. In nine years, the NASA-operated spacecraft discovered more than 2,600 confirmed planets outside of our solar system. In the new book Universal Life: An Inside Look Behind the Race to Discover Life Beyond Earth, theorist and observational astronomer Alan Boss, Ph.D., explains the importance of that mission and the implications it has on the finding of habitable worlds. As Chair of NASA’s Exoplanet Exploration Program Analysis Group, Boss is uniquely positioned to offer an illuminating and well-researched take on what it means to go beyond our solar system.

Anti-Science and the Assault on Democracy

In December, you can give the gift of an impassioned defending of science via a copy of Anti-Science and the Assault of Democracy: Defending Reason in a Free Society. This collection of essays is centered on a common theme of fact-based thinking and analytic thought. It argues that a democratic society that believes in science is a more successful one and points out the irony of modern society’s distrust of facts. Scientists, the collection argues, aren’t elitists. They’re the foundation of a democratic society.