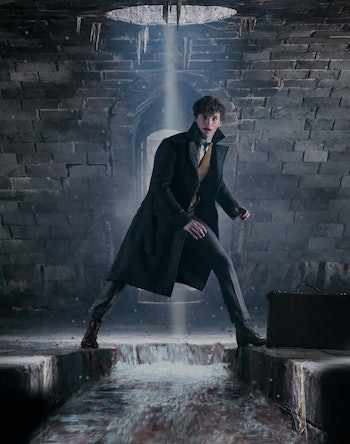 Fans of Harry Potter finally have what Lord of the Rings and Star Wars fans have had for years: Lousy prequels. Confirming that 2016’s Fantastic Beasts and Where to Find Them wasn’t just an awkward first step into a new era but the harbinger of things to come, Fantastic Beasts: The Crimes of Grindelwald is a bloated experience with minimal humor and life that narrowly avoids its fate as the Wizarding World’s Attack of the Clones.

Out in theaters on November 16, The Crimes of Grindelwald, directed by David Yates, picks up just months after the last film. Still a period fantasy set in 1920s Paris, magical zoologist Newt Scamander (Eddie Redmayne) is recruited to help Hogwarts professor/GQ Man of the Year Albus Dumbledore (Jude Law) thwart the rise of dark wizard Gellert Grindelwald (Johnny Depp, who practically begs you to throw your popcorn at the screen).

The rest of the series’ ensemble cast returns, including Ezra Miller as Credence playing a much bigger role, and Claudia Kim in a thankless turn as Nagini, a circus freak destined to become Lord Voldemort’s serpent servant.

At its core, Grindelwald retains its strengths from the first film but doubles down on every weakness from Where to Find Them. The characters are still a joy to watch, but Newt Scamander remains stubbornly passive. The story and plot meander before wrapping in an anti-climactic bow. Big twists are breathlessly revealed to the point where keeping track of anything is a chore. The visual effects, while beautiful, feel more like a video game cutscene you can’t skip through than an actual movie.

Grindelwald isn’t good, but it’s not quite terrible in the way that makes the Star Wars prequels consequently poor viewing experiences due to their wildly miscalculated direction. That’s not the case with Grindelwald, but however mildly charming the film can be, it’s an aggressively mediocre production with occasional flashes of a good film if you know where to look.

Yates is a veteran Harry Potter director who has a knack for rubbing personalities together to generate electricity, and Crimes of Grindelwald runs exclusively on this energy source — even when it becomes painfully clear Newt and Friends™ lack the same wattage as the Gryffindor trio. These characters still share a handful of tender moments that will keep Tumblr warm through the winter, and you might even have your heart broken in the end, if you’re vulnerable enough.

Where the Fantastic Beasts series truly fails is in its protagonist. Despite some very sharp directing early on by Yates, who subtly frames his camera out of Newt’s perspective, that focus quickly vanishes into the ether. By the climax, Grindelwald has its heroes doing the most basic “magic action hero” stunts against a CGI catastrophe so dull, nothing actually feels at stake.

The movie’s BIG TWISTS, which Warner Bros. is feverishly guarding with its own marketing campaign (#ProtectTheSecrets) as if the studio has the Pee Tape, will be a big deal, I guess. If the gasps I heard during the advanced screening I attended are any indication, fans will freak out over the new revelations to Rowling’s canon. But take a step back and these twists carry so little narrative weight to the film it’s meant to serve. This isn’t storytelling, this is database entry for the Harry Potter Wikia.

And then there’s Johnny Depp. While Jude Law is mostly distracting as a hunky Dumbledore, it’s Depp as Grindelwald who is the weakest of the ensemble. There is nothing compelling about Grindelwald, nor anything to Depp’s performance. I cannot describe Grindelwald as a character beyond “evil,” “pale white,” and “extremist” — so basically a Fox News anchor. We know Depp is capable of range, yet he’s bafflingly treating Grindelwald like it’s an elaborate cosplay video on YouTube. The film could have saved millions on a more interesting actor, one who didn’t hit their spouses, which would have been better money spent.

Two movies in, I don’t know what Newt wants besides becoming the Wizarding World’s Steve Irwin. That goal involves neither Grindelwald nor Dumbledore, and, even as a reluctant protagonist, I fail to see any reason why Newt is qualified to lead this story. Things only happen to Newt. Nothing happens because of him. This was also Harry Potter’s problem, but at least Potter’s “Chosen One” schtick had legs to get him through seven books and eight movies. Newt doesn’t even have that, which makes the prospect of another Fantastic Beasts sound less exciting and more like a threat against the Muggle world.

Fantastic Beasts: The Crimes of Grindelwald opens in theaters on November 16.