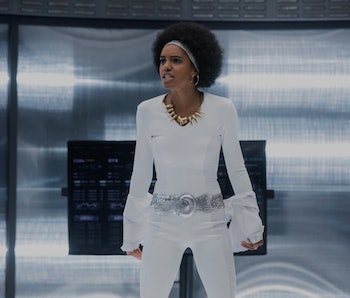 At the end of Legends of Tomorrow Season 3, Amaya returned to her village and her time, but we knew Maisie Richardson-Sellers would be back — just as a different character. In Season 4 episode 3, that character was revealed, and it means quite the adjustment for the rest of the team.

Spoilers for Legends of Tomorrow Season 4 Episode 3 below.

The Legends are traveling through time hunting down magical fugitives in Season 4, and they track one to 1970s London in Episode 3, “Dancing Queen.” There, Ray infiltrated The Smell, a punk band that doesn’t exist in the regular timeline, and learned which member was responsible for the magical spike: Charlie, a shapeshifter.

During his time with Charlie, Ray shared a bit about his friends, including Amaya.

Charlie later used that to her advantage when Constantine and the rest of the time tried to send her to hell as they did with the unicorn and fairy godmother in the first two episodes of Legends of Tomorrow Season 4.

Constantine warned the others that shapeshifters were manipulative, and we saw firsthand with from Charlie. First, she stole Ray’s super-suit and used it to attack Sara, Mick, Zari, and Constantine. Then, when Zari used her powers to hold Charlie against a wall and Constantine opened the portal to hell, Charlie shifted into the four of them. To her, they were the monsters, “who’d rather do what’s easy than figure out what’s right, who’d send an innocent to hell.”

Finally, she shifted into Amaya. “Ray said your team’s moral compass is missing,” Charlie said. “Can you send her to hell?” No, they couldn’t, but Constantine refused to let a shapeshifter onto the Waverider. Before the team took her on board their ship, he gave her a “lobotomy of sorts” and took away her ability to transform.

With that, Maisie Richardson-Sellers was back on the Waverider and with the team, but Charlie is definitely nothing like Amaya. We’ve already seen that, as she fought being locked up on the ship and asked for a beer.

“She’s snarky, she’s cheesy, she’s a bit of rebel, she’s a massive troublemaker, and she’s just out for herself,” Richardson-Sellers said to Entertainment Weekly. “She doesn’t care about any collective or greater good, so she really shakes up the energy on the ship, and everyone’s a bit confused by her.”

“She kind of sheds some light on some stuff that the team, just being in the thick of it, hasn’t realized,” Caity Lotz told EW.

Right now, the team’s hunting down magical creatures and sending them to hell, but Charlie is one of those magical creatures, putting her in a unique position to offer her opinion. She also knows what Ray shared about how things have changed for the team (specifically Sara’s relationship with Ava and Nate’s desk job).

Furthermore, Charlie’s presence in Amaya’s form is going to make things complicated for Nate, Amaya’s ex-boyfriend. He’s currently working at the Time Bureau, but Sara can only keep what’s going on from him for so long. She even went to get his input on the situation at the end of “Dancing Queen,” but he admitted he’s avoiding the Waverider because he kept hoping Amaya would be in every room he entered.

Since “Amaya is no longer on the Waverider” – or so he thinks – Nate was ready to return. Sara instead suggested he stay at the Time Bureau, but it’s only a matter of time before he finds out someone wearing his ex-girlfriend’s face is on the ship.

We even know how he’ll react when he does. “At first, [Nate and Charlie’s relationship] is quite confrontational because she feels like she doesn’t owe Nate anything, and Nate is just furious,” Richardson-Sellers told EW. “I think she’s a constant reminder of everything that he’s lost and of his old life.”

Legends of Tomorrow airs Mondays at 9 p.m. on the CW.