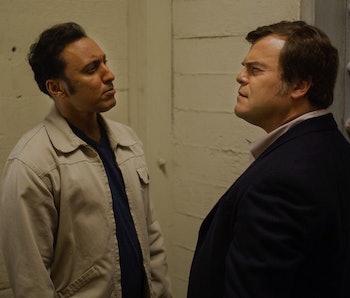 This week’s installment of The Brink, “Sticky Wicket,” proved just how comfortable the show is doubling down on plot. For most, the show’s the goal is to walk a fine line between character-based action and serialization so that fans can watch a story unwind and friends of fans can join fans on the couch without being completely baffled. With Pablo Schreiber cowering, Jack Black scheming, and Tim Robbins charming his way through the five-star hotels of the World, The Brink rejects the idea of the casual viewer and confirms that it’s not actually an HBO show at all, it’s an HBO Go show.

In a sense, The Brink shares a sensibility with Netflix’s Wet Hot American Summer: First Day of Camp. Both shows are driven by insanely complicated and dense narratives that make little temporal sense. Are we to believe that Secretary of State Larson has flown to India, Israel, and Switzerland, had several affairs, had surgery, bullied heads of state, and generally gone rogue within a window of 48 hours? That seems to be, more or less, the timeline. And, in that same time, fighter pilot Zeke has crash landed, been taken hostage, freed himself, been taken captive by art dealers, met a local gang, and found an interpol officer? That’s a lot of moving around. Only the Alex Talbot timeline really makes sense because Jack Black spends the show talking more than doing.

What does this weird density mean for the show? That viewers who skip episodes are entirely out of the loop and that it’s better suited to binge watching than it is to weekly viewings.

“Sticky Wicket” really drove that point home by, strangely, treading water. We see Secretary Larson convince Haroon Raja to return to Pakistan only to see his college buddy (as it turns out) taken out by a U.S. air strike. We also see Zeke fight a tribal warrior only to be taken captive by an Interpol agent who had apparently been hiding in left field. In both cases, the characters failed to really accomplish anything during the episode, but had the Persian rug of their plans pulled out from under them. They didn’t wind up exactly where they started, just 10 feet to the left, which is exactly the wrong amount if you want viewers to be able to follow your show.

Is that what writer Aasif Mandvi wants? Well, we don’t know. What we know is that the show has been picked up for a second season and that if nothing changes it looks like it’s going to run out of Earth well before then. The stakes of the show, total nuclear annihilation, are such that some sort of resolution is required to extend the plot. But there’s nothing forthcoming. Consider this evidence that The Brink is actually more Fargo than West Wing, an anthology series about the various militaristic ways the world might end. Expect the next season to take place in Russia. Someone put in a call to Yakov Smirnoff’s agents.

The question regarding this particular apocalypse that we’ll hopefully see answered next week: Who will fill the power vacuum in Pakistan? The smart money might be on Zeke. Who the hell knows?