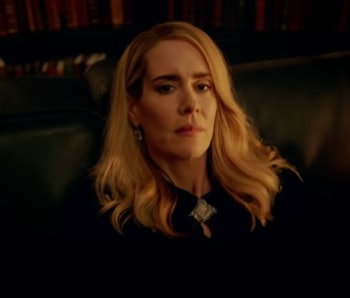 There are only four episodes left of American Horror Story Season 8, and much of the season so far has been in the form of flashbacks or other storylines that don’t tell fans much about the actual end of the world that Apocalypse is supposed to be portraying. But Ryan Murphy himself, the creative mastermind behind AHS, may have offered a clue back in September on his Instagram account about how things are going to go before the season is over.

Although the post in question is from weeks ago, fans are now putting the pieces together about how it could give away the ending of this season based on what’s happened so far. Viewers now know that the witches of Coven tried to thwart Michael Langdon’s rise as the Antichrist, before the world “ended” in warfare, thanks to a number of flashback episodes, and some fans think an Instagram post Murphy made on September 10 may directly allude to that struggle of wills.

The image Murphy posted is of an hourglass, held by a red, rather sinister-looking hand in the middle. The top half of the hourglass features what looks like the Murder House of Season 1 — where we know Michael grew up — in flames with a red backdrop.

The bottom of the hourglass appears to show several people directing power at the top half of the hourglass, with a pentagram symbol below where their power meets in the air. It’s not a stretch to wonder if this is supposed to symbolize the witches of Cordelia Goode’s coven trying to stop a future that Michael and his existence have set in motion, and that future possibly involving the destruction of the Murder House — and a return to the location for faithful AHS fans.

And fans seem to agree that there’s a lot of symbolism in the image. Comments on the Instagram post range from, “i think it means that the witches will travel in time to stop the apocalypse” from @arrogantcat1 to “WHAT does this mean there is so much symbolism and foreshadowing im quaking” from @thomcattt.

Prints-Of-Darkness over on Reddit also posted an image of an hourglass from an Apocalypse teaser that also seems to imply time travel could be a big part of the rest of the season. “One half is dark and the other is light. I’m guessing the dark is the apocalypse and the light is the timeline where they reverse the apocalypse,” Reddit user housedownrealness replied.

Another Reddit user, AHSfan2, pointed out on the same thread that, “They would have to use the Murder House itself to reverse the apocalypse…By destroying the house so that Michael never existed!” Which would bring in the Murder House as implied in the image Murphy posted all those weeks ago.

This is certainly not the first time that AHS fans have picked up on time or time travel being important to this season of the series. Previously, Reddit user PlasticWillow suggested, “maybe something is going to be done to change the past and stop the apocalypse before it even happens, rewriting history.”

In fact, time has been a big theme on the eighth season American Horror Story since Episode 2, at least. Fans guessed even then that the witches might be involved in stopping the apocalypse from occurring at all, and Murphy’s Instagram post does seem to hint at that possibility.

With just four episodes of the season to go, including the October 24 episode “Traitor,” there’s not much time left for fans to play around with these fun theories before Murphy proves them either right or wrong.

More like this
Entertainment
8.1.2022 2:00 AM
Westworld Season 4 just copied one of the best Doctor Who episodes ever
By Ryan Britt
Culture
8.5.2022 10:30 AM
How Netflix's epic Sandman finale sets up Season 2
By Mónica Marie Zorrilla
Culture
43 minutes ago
Will the Corinthian return in Sandman Season 2? Comics reveal the answer
By Mónica Marie Zorrilla
Related Tags
Share: