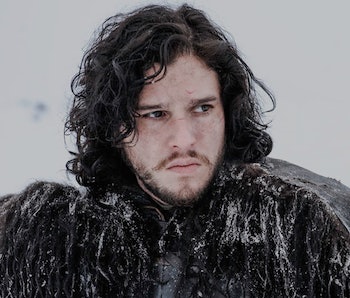 Winter is coming, and only has three more seasons to get here.

HBO president Michael Lombardo told reporters at the Television Critics Association’s summer press tour that the popular fantasy series Game of Thrones, which recently racked up 24 Emmy nominations, the most for any show this year, will likely be on the air for eight seasons despite his previous statement predicting a decade-long run.

When asked about the potential length of the series, Lombardo said that showrunners David Benioff and D.B. Weiss are “feeling like there’s probably two more years after [season] six,” and that he would “love for them to change their minds.” In a sense, Lombardo seems to be standing in for fans. He’s just a fan of money too.

But Thronies ticked off by the fact that they’ll only get one more season than George R.R. Martin’s book may not have to unsheath their words made from Valyrian steel just yet. Lombardo also hinted at the possibility of a prequel.

“I would be open to anything David and Dan want to do,” he told TCA members. “There’s enormous storytelling to be mined in a prequel.” But he also added that he didn’t want to jump the gun, saying, “The focus is on figuring out the next few years of this show.”

Some people hate the idea of an expanded universe as a blatant cash and culture grab, which it almost certainly is, but with a storyline as rich as Game of Thrones it would be amazing to see what came before all the medieval-type misery once the Song of Ice and Fire saga is all wrapped up. With the series as popular as ever, HBO would definitely throw as much money as they need for some brutal Targaryen dragon-riding action. Who wouldn’t want to see that?

And what about the other question fans are still clamoring about a month after season five ended? When it comes to poor Jon Snow, Lombardo insisted that “Dead is dead is dead. He be dead… Everything I’ve seen, heard and read, Jon Snow is indeed dead.”