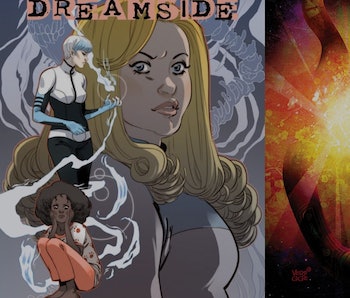 In Valiant Comics, the Deadside represents an alternate plane of existence where the souls of the dead end up, but according to two Valiant writers, there’s a lot more to this universe’s afterlife than that. For storytellers, Deadside is a magical playground where normal rules don’t apply and comic books experiment and try weird things.

It’s a bit like the fantastical Land of Oz (of Wizard of Oz fame), according to Valiant writers Jody Hauser and Andy Diggle, who work on Faith: Dreamside and Incursion, respectively. In conversations with Inverse, the two writers explained why Deadside is like Oz, and how that gives them the freedom to tell different types of stories.

“Deadside is like Oz in that it has a lot of different areas, each with its own set of rules,” Hauser says. “A character might be able to handle one area ok, and then get themselves in trouble in a different area. It’s a fun place to throw characters to present them with new and varied, bonkers challenges.”

Article continues after this video.

In this four-issue arc, Faith Herbert teams up with Doctor Mirage and ventures into the Dreamside when her friend Animalia is being “haunted by the kids who passed away in earlier battles.” Despite being some kind of dreamscape, Dreamside is actually just “a very, very strange section of the Deadside,” Hauser explains.

It’s all about forcing a character out of her comfort zone, where her commitment to being a hero will be tested in new ways.

“This is definitely kind of a horror story — which is Faith’s least favorite genre,” she says. “I keep trying to push her into that because Faith shouldn’t just be able to do the fun superhero stories and time-travel stories. She has to do horror as well.”

The horror touches from Faith’s previous ongoing series included “ghosts” that were actually “an alien special effect” that was “all a ploy,” but “this time the ghosts are real,” Hauser teases.

“This is something where she’s literally leaving her body at a certain point to walk in the Deadside,” she says. “The kid gloves are off. This is not a trick.”

"Deadside is a variety of different worlds clustered together or stacked on top of each other that’s basically a huge playground. — ‘Incursion’ writer Andy Diggle

Andy Diggle’s Incursion storyline, also told in four parts, explores yet another dynamic of the Deadside.

“Every writer seems to have brought their own version of the Deadside so we’ve seen little glimpses of lots of areas,” Diggle says. “But I like the idea that the Deadside is a variety of different worlds clustered together or stacked on top of each other that’s basically a huge playground.”

In Diggle’s corner of the playground, he follows the Eternal Warrior and the current Geomancer as they fend off a transdimensional alien invasion.

“It’s an alien invasion story with a twist because it’s the idea of an alien ecosystem trying to replace our ecosystem,” Diggle says. “But it starts with the Deadside.”

The official description explains that “our Deadside isn’t the only deadly dimension of its kind, and another belonging to an alien world is about to collide with Earth’s.” In this storyline, a “tide of unearthly terrors” threatens the “very nature of our reality.”

Whereas Faith’s current story offers more personal horror, Incursion is a massive event on the cosmic scale that’s slated to change more than one dimension forever. It’s another example of how the Deadside serves as connective tissues across the Valiant universe whil also serving as a canvas for some of that universe’s most imaginative storytelling.