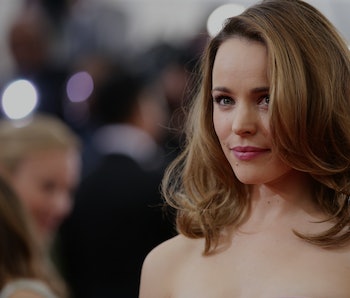 A decade ago, if you’d pitched the idea of Rachel McAdams wiping the floor with Vince Vaughn and Colin Farrell as a downtrodden, beleaguered cop, you’d get laughed off the studio lot. True Detective season two hasn’t yet evoked the same strong reactions as its mood-soaked debut season — that stretch is but a distant memory. But its saving grace is McAdams, the Canadian rose among the weeds. She’s a contender. She’s come a long way since striking out in a handful of forgettable TV movies before graduating to a flick that could have flopped, but luckily turned into a cult smash: The Hot Chick. Sorry, Mean Girls.

Regina George was her breakout role. A high school clique leader - therefore satan incarnate - inspired by the triptych of conformity from Heathers, Regina George oozes with ulterior motives. She seethes with condescension. She’s a mistress of manipulation. You get the picture, and it’s hardly heart-warming. McAdams got on the map ‘cause she stole the movie from its supposed star — who’s still a real classy broad.

It was her next role that cemented her well and truly into the cultural bedrock. Her rain-soaked liplock with Ryan Gosling in Nicholas Sparks’ melodramatic weepie scored her big points with a younger demographic whose romantic ideals were rewritten after endlessly devouring The Notebook. Switching from a heartless queen bee to a lovelorn teen worked. And there she remained, trapped in a sweet, treacly amber for several years as a romantic supporting character.

The typecasting is in part informed by her actual persona. McAdams isn’t some wild partier, raging through the industry in a blitzkrieg of booze and pills. Her real personality seems quite nice. That made it easier for audiences to believe her as a hopeless romantic, an up-and-at-‘em news anchor, a moody twenty-something, or a hopeful romantic. So she thusly attempted to shake stuff up by erring into edgier material.

Wes Craven’s Red Eye was one of three movies she tackled in 2005 - the other two were Wedding Crashers and Family Stone - and she handled the pressure of a psychotic Cillian Murphy well. Shame the movie was a dud and failed to garner any recognition for her efforts. Woody Allen cast her as a self-serving socialite snob in Midnight in Paris, and she runs with the chance to do something - anything - other than fawn over a man. Which, practically every role beforehand has demanded. Wanting to explore the experimental side of movies led her to Terrence Malick, the decorated filmmaker with a habit of slicing actors completely out of his movies in the edit suite. McAdams survived To The Wonder. Even if the film itself falls short of the brilliance witnessed in The Tree of Life it pushed McAdams out of her safe zone. Towards darkness.

Passion was not a return to form for Brian DePalma whose work in recent decades pales in comparison to his heyday hits. For McAdams it presented another chance to cut loose and shed the goody two-shoes image that had held her back from new experiences. It too turned out to be trashy discount DVD bin fodder. No doubt billed as scintillating when pitched, the lesbian smooches between McAdams and Noomi Rapace carry less romantic chemistry than that time Ryan Gosling canoodled with a blow-up doll.

“If at first you don’t succeed” led her to A Most Wanted Man - and undoubtedly her most gripping performance to date. If it weren’t for this political thriller then it’s unlikely that HBO’s creative brass would have considered her.

Across her career she’s dabbled in the different (Passion) and always returned to the familiar (About Time). This current swing from dependable romantic lead to versatile dynamic performer might take a hold of McAdams for a while longer. Watching, and absorbing her turn as True Detective’s Ani Bezzerides is like hearing an album from a band who’ve pumped out a killer, career-defining record in an entirely new genre. And that’s what this era is for McAdams — a curve, a bend, a new definition in her career. Drinking, drugging, and porn are Bezzerides’ preferred pastimes, who also carries a knife wherever she goes. And she likes gambling. Who wants to be a good girl when you can chuck blades around?

Of course there’s more to it than just dismantling her established image. Going against the grain has her headed down a new road, paved with opportunity. This year alone she’s in boxing drama Southpaw and investigative thriller Spotlight. The future for McAdams looks bright. In that hard-hitting murky way depicted in prestige films. You know, the ones that bag all the awards.