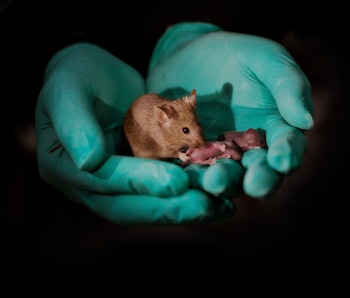 Everyone knows it takes a male and a female to make a baby. But what a new study from the Chinese Academy of Sciences suggests is that maybe it doesn’t. In a new study, the team of scientists reports they did the seemingly impossible: Produce healthy baby mice from two mothers. The researchers describe their achievement in a breakthrough new paper in Cell Stem Cell.

The single-sex parent phenomenon has been observed naturally in reptiles, fish, amphibians, and invertebrates, but it was never thought to be possible in mammals, who reproduce differently. But as the team describe in their paper, all it took was overcoming the genetic limitations that usually make same-sex parenting impossible. The team, which also included researchers from Northeast Agricultural University in Harbin, China, used a combination of stem cells and CRISPR precision gene editing to produce healthy mice from two mothers. Interestingly, they tried the same with embryos from two fathers, but those offspring only lived a few days.

In the paper, they describe the bizarre, ingenious way the mouse embryos were formed using an egg from one mother a stem cell from another mother. The team’s breakthrough was figuring out how to manipulate the DNA of the stem cell so that the babies wouldn’t have birth defects.

As the team explains in their paper, when the genetic material from two mothers is fused to create an embryo, developmental issues arise from the genetic “imprints” left behind by each parent on their respective genes. Mammalian reproductive systems were not designed to support the fusion of DNA from two same-sex parents, but the team realized that the natural obstacles to doing so could be overcome. The researchers simply used CRISPR-Cas9 to delete the three genes that bore those parental imprints.

So, the team took the haploid DNA (that is, it was only half the normal amount of DNA, which is necessary for reproduction) from one mother, wiped it clean of all parental imprints, then inserted that DNA into an egg (also haploid) from the other mother. Two halves made a whole, and the embryo developed as normal. Out of 210 such embryos, the scientists birthed 29 live mice. These “bimaternal” mice thrived, living into adulthood and even producing babies of their own.

“Previously, we have derived mice with two female parents with one or two DNA region modifications, but all these mice exhibited significant growth retardation before or after birth,” Zhou Qi, Ph.D., a professor of developmental biology at the Chinese Academy of Sciences’ Institute of Zoology and one of the paper’s co-authors, told the South China Morning Post. “Now we have found a third DNA region to delete, and produced bimaternal mice — those from two mothers — with normal growth and behaviors.”

The “bipaternal” mice born from two males did not fare as well, which suggests that researchers have more work ahead of them to pinpoint the locations of the imprinted genes in embryonic stem cells from male mice. That procedure was a little more complicated: the team first had to combine haploid DNA with a sperm cell, then put all that DNA into an egg cell that had been stripped of its genetic material (even if DNA come from two males, you still need an egg to grow a baby in utero).

“There may be some important unknown imprinted regions that need to be modified for the survival of bipaternal mice. We are planning to dissect the necessary imprinting modifications that can support the survival of bipaternal mice to adulthood,” Wei Li, Ph.D., a stem cell researcher at the CAS Institute of Zoology and one of the co-authors of the study, told Forbes.

As strange and fascinating as this research is, it’s hard not to wonder: Why? There are a lot of good reasons: By understanding how genetic defects arise in the case of same-sex mouse parents, scientists lay the groundwork for a better understanding of how genetic errors can arise and persist in humans.

“[The research] may even lead to the development of ways for same-sex couples to reproduce healthy children of their own,” Teresa Holm, Ph.D., a research fellow in molecular medicine and pathology at the University of Auckland who wasn’t involved in the new research, told BBC News. She also pointed out, though, that there are “significant ethical and safety concerns that would need to be overcome”.

For the time being, the new study’s authors recognize that it will be a long time before this kind of reproduction happens in humans, both for scientific and ethical reasons.

“We cannot assert this technique can never be used in humans in the future. But for now, the answer is no,” Wei told the SCMP. “There are many unsolved questions such as whether the effects of DNA deletions in mice could also be carried out in other mammals like primates.”