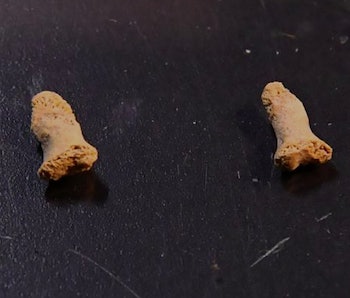 In 2012, a video depicting a golden eagle snatching a toddler in Montreal went mega-viral. It proved to be a doctored hoax, but it was a flashback to a time when birds of prey really did hunt humans. According to new, unpublished research, big birds hungry for the taste of human flesh have been a problem for thousands of years. The evidence: the recently discovered hand bones of a Neanderthal child, which were clearly digested by a large bird.

On Friday, the public information service Science in Poland described the small bone fragments — each no longer than a centimeter — that were found in Cave Cinema, in southwestern Poland. At 115,000 years old, the bones are the oldest human remains ever found in the country.

Study co-author and Jagiellonian University professor Pawel Valde-Nowak, Ph.D., told Science in Poland that “analyses show that this is a result of passing through the digestive system of a large bird.” This theory is supported by the fact that the bones are covered in dozens of holes. The child is believed to have been between five to seven years old at the time of the attack.

A full analysis of the bones will be published later this year in the Journal of Paleolithic Archeology, helping identify what Homo species the child belonged to, but for now the team is pretty sure it was a Neanderthal.

Unfortunately, they can’t run DNA analysis on the bones because they’re in such poor quality. Nevertheless, the scientists are confident that the bones belonged to a Neanderthal because they were found in a particularly deep layer of dirt. Homo neanderthalensis is thought to have lived throughout Europe and Asia from about 400,000 to 40,000 years ago, and archeologists had previously found tools believed to have been used by Neanderthals in this same layer as the child’s bones.

What the scientists don’t know is how this Neanderthal child ended up in the belly of a giant bird. They hypothesize that the bird could have attacked and partially consumed the child or fed upon the child’s corpse. Either is plausible — and not unprecedented.

One of the most famous hominin specimens, the Taung Child, was a three-and-a-half year old Australopithecus africanus whose death remained a mystery for a long time. Its skull, with both human-like and ape-like features, was found in Africa in 1924, but scientists in 2006 discovered puncture marks at the bottom of the skull’s eye sockets clearly made by eagle talons. Further examination of the bones surrounding African crown eagle nests by scientists at Ohio State University revealed that these eagles still kill large monkeys that weigh the same as a human toddler.

And while there are the rare real-life cases of eagles that still pluck up babies and dogs, whether not a bird could even fly away with a Neanderthal child is a bit of moot point. In the same Ohio State University study, study lead W. Scott McGraw, Ph.D. pointed out eagles don’t need the strength to lift a primate or a child. Instead, they dismember their prey and take pieces of the carcass back to the nest. That’s bad news for a kid or a monkey, but good news for the scientists digging up their bones later on.