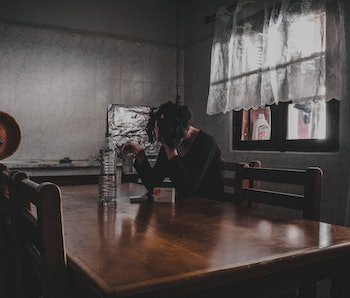 Depression is an evolutionary conundrum. On the one hand, it’s the leading cause of disability worldwide; on the other, the genes that give rise to it have been around at least as long as modern humans have walked the Earth. That means it must play a role in our survival, though scientists don’t know what. Now, bringing them closer to the answer is a new, equally perplexing study showing that depression might be linked to navigating the social world.

It seems inconceivable that depression, a condition that makes us feel unmotivated and isolated, might have survived millions of years of evolution because of a gene that helps us navigate the social world. But that’s what Xenia Gonda, Ph.D., a professor at Department of Psychiatry and Psychotherapy at Semmelweis University in Hungary, recently presented at the 2018 European College of Neuropsychopharmacology Conference in Barcelona.

There’s no one gene that can predict depression, Gonda explains to Inverse, but her research explains the role of one important gene — the serotonin transporter gene 5-HTTLPR— to tell a bigger story about how depression may have survived over the years. This strange single gene sees to play two roles over the course of a person’s life.

“Genes behind depression survived evolution because they were ‘designed to encode something adaptive’,” she says. “However our modern societies are different, with different stressors. So this variant which may have made us more susceptible as a social species, also makes us vulnerable to other types of stress.”

Her earlier work showed that men over 30 with one version of this gene (called the “short” or “s-allele”) became more depressed when confronted with financial issues, suggesting that the s-allele was generally associated with a higher tendency of depression. But her recent results reveal a bizarre flip side: In younger people, this gene seems to confer protection from certain types of depression, particularly depression caused by social stresses.

These situations represent the stages on which the s-allele plays its dual roles. In youth, it appears to help people navigate and protect themselves from stressful social environments. In adulthood, it turns its back and makes financial stress even more difficult to deal with. Understanding this perplexing duality is what Gonda set out to do.

To establish the “protective aspect” of the s-allele, Gonda gave 1,000 men of varying ages in England and Hungary a survey intending to show how they dealt with stressful social events, like fights between friends or the implosion of a relationship. This is a small sample size for a genetics study, she cautions, but it was enough to show a trend linked to age. Gonda found that the men under 30 with the s-allele seemed to be less affected by these events — or “less depressed” — than those without the s-allele.

This, she explains is the s-allele acting in its adaptive capacity. Gonda believes that this gene has survived millions of years of natural selection because it actually helped people ward off social stresses and thrive in groups.

Gonda’s earlier work, published in Translational Psychiatry in 2016, showed that the s-allele acts very differently in an financial stress environment. In a sample of 2,000 individuals, she examined the frequency of the s-allele and how much her subjects thought major emotional life events, like childhood trauma or financial stress, had affected them.

That time, she found that men above the age of 30 who had the s-allele tended to report being highly affected by financial stress, reporting more depressive symptoms.

To reconcile the two roles the s-allele seems to play in the human lifespan, Gonda focuses on the the way they affect our social lives. Though it makes us better at socializing in our youth — a crucial part of survival, especially for early humans — the s-allele also leads people to feel the sting of financial stress in adulthood as a social failure.

“We should always consider the possible ancestral context when looking at the adaptive or risk side of genes, and it appears that the adaptive role of 5-HTTLPR was to increase sensitivity to social influences and events with positive outcomes, and its negative effect like increasing depression risk appear only in case of a few types of stress,” she said at the ENCP Conference. “And this is probably why these genes have been preserved in evolution.”

In other words, evolutionarily speaking this gene is useful for survival at the age when humans have babies, which is why it kept getting passed on through the generations. Its ill effects don’t kick in until people are a little older, at which point it doesn’t matter as much in an evolutionary sense.

“We think that severe financial stress is a pervasive stressors which means that sustaining our lives is at risk,” she says. “This may be more stressful for those above 30 and especially for men providing for their families.”

In terms of genetics, it isn’t that weird that the s-allel can play different roles over the course of a person’s life. In fact, genes can be expressed in many ways depending on the environment, a phenomenon called the “epigenetic effect.” Gonda is careful to make sure that nobody gets the wrong idea about the s-allele being the sole driver of depression; the way it manifests in different environments could be hugely different, but only future studies will tell.

Because her findings are the conclusions of two studies put together, Gonda plans to look into the dual roles of the s-allele with larger sample sizes and more ways to control underlying variables.

For now, her work offers a preliminary glance at the ways that our genes, honed by years of natural selection, are still subject to the environments that surround us — even if they barely resemble the ones we evolved millions of years ago. It’s a tragic and elegant example of the tradeoffs of natural selection in action.

More like this
Mind and Body
5.11.2022 10:45 AM
The modern flu is a direct descendant of the virus that caused the 1918 pandemic
By Katie MacBride
Science
5.11.2022 11:00 PM
Look: Missing 19th century platypus and echidna specimens discovered in museum storage
By Jennifer Walter
Mind and Body
5.4.2022 5:54 PM
Overturning Roe v. Wade will make the U.S.’s horrifying maternal mortality rates even worse
By Katie MacBride
Related Tags
Share: