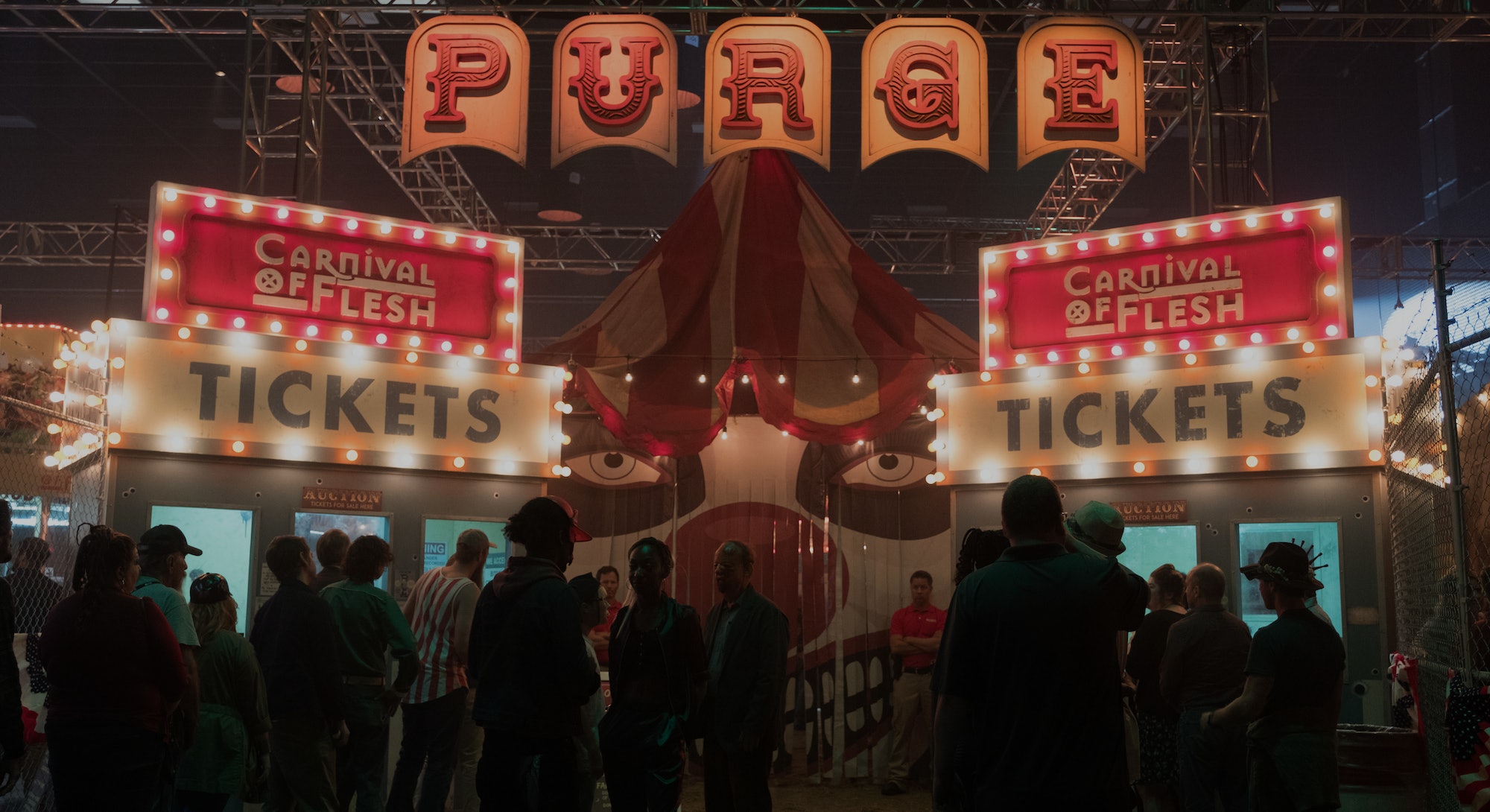 The most frightening and festive methods of murder on Purge night happen at the Carnival of Flesh. Officially called Bygones, the new murder festival debuted in Episode 4 of The Purge, and it’s one we’ve stepped foot in before. Inverse visited the set of The Purge in New Orleans this past summer to walk through the horrific carnival grounds — and we learned a ton of The Purge secrets in the process.

Previous movies in the Purge franchise often depict high-profile rich people paying top dollar to murder members of the lower class in the safety of their mansions, and The Purge depicts as much at the Stanton family’s party. But the Carnival of Flesh offers a cheaper, sleazier alternative for Purgers seeking structured murder with fun themes on the cheap. It’s a place where you can buy an old man’s life for just $45, and one character even calls it the “McDonald’s of the Purge” — even if it feels more Disneyland for psychopaths.

“We have the French Revolution set up, so you can kill some aristocrats if you want to,” production designer Sharon Lomofsky told a group of press on a set tour in June. “And there’s the Spanish Inquisition area and a firing squad, too. We also have a Caveman place people can use, and there’s a Witch Hunt tent, where people can come and torture and burn ‘witches’ if they should want to.”

Lomofsky went on to explain that the original plan included even more stylized “Kill Tents,” but production had to whittle it down to “focus on things we thought would be visually arresting for viewers.”

Here are a few key details we learned about the Carnival of Flesh while on the set of The Purge:

We’re introduced to the Carnival of Flesh during “Release the Beast” when the blue-robed cultists deliver Penelope there to be killed. Despite Penny wishing for a swift death, she learns that her experience as a martyr might be more torturous than she’d initially hoped.

When martyrs like Penelope come into the Carnival, they’re funneled through a cattle pen just like livestock.

True to normal carnivals, the Carnival of Flesh has hot greasy food and themed entertainment, except rather than a ring or ball toss, each booth is dedicated to different types of historical murder. The dozen Kill Tents each feature a specific brand of historical murder. The Fall of Saigon and Japanese Kill Tents might be the most problematic, but others like Caveman could be the most brutal.

Like all of the martyrs, Penny is auctioned off to the highest bidder. In the pens, she bonds with an old man who mistakes her for his granddaughter. After he makes a scene trying to protect her, they’re both moved forward to the front of the line.

Ultimately, Penelope is bought by a man already she knows for a whopping $2,000, and the Episode 5 teaser reveals that he takes her into the Witch Trials tent to be killed.

Will her brother be able to make it in time to save her? We’ll all find out in “Rise Up” airs on Tuesday, October 1.