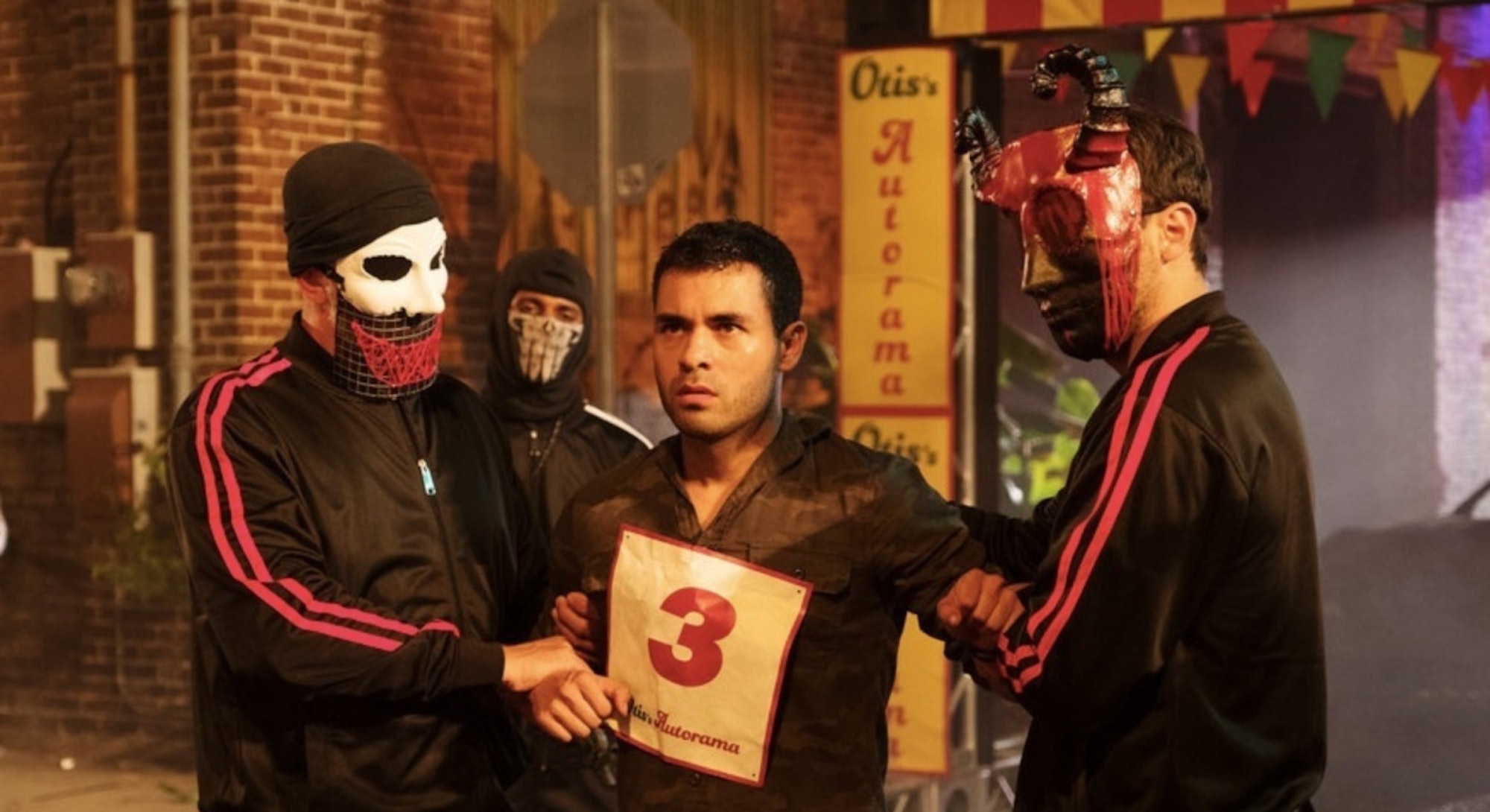 Times might seem tough for those living in the economy of 2018, but they’d be even tougher if national laws suspended crime for one night a year, right?

By now, The Purge has become bonafide cinematic universe with a series of popular films and a new miniseries on USA Network. The dystopic concept of a single night where laws don’t exist and it’s kill or be killed has entered the mainstream (there’s even a Rick and Morty parody episode) but it’s far from the blandly violent, gory nightmare it sounds like. In its new television format, The Purge uses its longer runtime to explore exactly what drives humans to accept this terrible reality. The answer, perhaps unsurprisingly, is money, and the way the rich and powerful use it to control and oppress the rest of society.

What makes The Purge so disturbing isn’t all the violence and murder — it’s the way the wealthy elite use the Purge as a means of population cleansing, as a way to fuel the economy by mass murdering the poor.

But the wealthy don’t need annual murder sprees to oppress the middle and lower classes. If there’s a common thread throughout some of Fall’s TV’s biggest shows, it’s the idea that the wealthy use money to oppress the world. At face value, this might not seem a novel concept, but it’ll make each of these shows feel that much more frightening when you realize how true to life they really are — even when they might seem fantastical.

Each of these shows is clearly a work of fiction, but the way they communicate wealth’s creeping influence on society distorts our views of reality in more compelling ways.

A world very much like our own is on the brink of total chaos from a rising terrorist faction, and the only one who can stop it is a guy who traces all the very secretive ways the group’s leader handles his money.

John Krasinski is the fifth actor to play Jack Ryan, a CIA analyst suddenly thrust into active field duty. He goes from pencil pusher to legitimate spy overnight, and his entire world changes. “I was just following the money, sir,” he says. To be more precise, he works in the terror, finance, and arms division of the CIA, and Jack Ryan flags the transactions of Mousa bin Suleiman, a Syrian-based terror-cell leader, as suspicious. It’s an updated version of a character originally written within the context of the Cold War, but its message that money is ultimately a tool to create terror and control the world still holds up today.

In some ways, Jack Ryan might be one of the most frightening shows this fall just because of how realistic it feels in the current world climate.

How could an anime dystopia where slackjawed giants try to devour what’s left of humanity have anything to do with the present day political climate? Call me crazy, but Season 3 of Attack on Titan — which premiered in July and will run well through the end of autumn — eschews a lot of kaiju-esque violence to lean heavier into the politics of this dark fantasy world. There’s a false puppet king, a secret queen in the making, and a military coup.

The remains of humanity were long ago forced to reside inside a series of massive walls keeping the Titans out, and the broader political climate of this world is one of immense poverty. Manga readers already know what’s coming next, but without spoiling anything, I’ll say that Season 3 examines how a corrupt political elite controls wealth and information to subdue a starving, impoverished population.

People in the real-world often malign about the 1 percent, but in the world of Attack on Titan, it’s more like the 0.001 percent. Nobody seems to know why there are tons of nude giants eating humans, but it’s ultimately a just another tool the wealthy elite uses to oppress and control the denizens.

Much like Breaking Bad before it, Netflix’s Ozarks follows a somewhat decent, brilliant guy who’s morally compromised out of desperation. So he’s swept up into a life of crime collaborating with a major drug cartel under threat of death. Once you’re embedded in this life, there’s no leaving on peaceful terms, only an endless series of escalations.

Ozarks lacks the subtlety and top-tier acting and directing of Breaking Bad, but the theme of money’s corrupting influence remains the same. Some people create their own horrible dystopian nightmare by pursuing money at the expense of all else, but it’s the constructs of society that force it upon them. Dying Walter White wanted to protect his family and leave them with financial comfort, but the listless Marty Byrde (Jason Bateman) was swept up in his corrupt partner’s ambitions.

Why do some characters come to worship money to such an extent? And what are they willing to do in the pursuit of it?

This cool sci-fi story of two people with mental health issues explore bizarre worlds that may or may not exist, but the show’s framing device (a mysterious late-stages pharmaceutical trial) adds an extra dimension to this “Black Mirror” premise.

Fictional company Neberdine Pharmaceutical and Biotech (clearly modeled after the real world’s Big Pharma corporations) promises a dozen patients that this three-day drug trail will cure all of their mental woes, but nobody in the world of Maniac really cares about helping others. It’s all a means of manipulation, of making money in a world full of fragile people.

Two of the most interesting storylines in The Purge have everything to do with money and class, ultimately exposing how for the upper echelon of society, the Purge itself is all about money.

Jenna and Rick Bettencourt are a married couple attending the lavish Purge-night party of the rich Stanton family. Together, they own and operate a real estate development firm — Jenna is the architect while Rick handles the business. They typically wouldn’t risk their lives to venture out of the house on Purge night, but the party represents a chance to secure funding for a project that will provide low-income housing. While getting ready earlier that night, they call the entire thing a “deal with the devil.”

For the Bettencourts, it’s the need for more financial security that drives them to compromise their morals. This is even more apparent with another character from The Purge, Jane.

“Jane is a young, successful businesswoman,” actress Amanda Warren told Inverse during a set visit this summer. “She ascends the corporate ladder in the financial world quite quickly, but inevitably hits a roadblock and a glass ceiling. Purge night provides opportunities to … correct that.”

Jane hires a Purge assassin to murder the boss that won’t ever promote her, but after she reconsiders, she sets out into the night to undo what she set in motion.

Wealth and power, represented by both Jane’s boss and the Stantons, is protected and reinforced by the Purge, and the overwhelming presence of the yearly event makes it feel like the only way to get ahead is to participate. Good people forced to participate in the worst parts of society because they see no other way to survive.

What could be more horrifying than that?