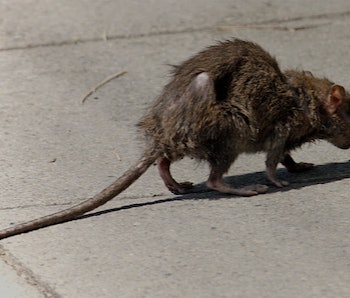 Hepatitis E is a liver disease caused by infection with the hepatitis E virus (HEV). The virus belongs to the genus Orthohepevirus, and within that genus are four species that infect different animals. Orthohepevirus A, for example, includes strains from humans, pigs, and rabbits. Orthohepevirus C includes strains from rats. The Hong Kong patient is a bit of a puzzle, as nobody really knows exactly how a human could be infected by a strain that affects rats. In 2017, scientists wrote in the Journal of Veterinary Medical Science that “it is still unknown whether HEV-C1 can spread from wild rodents to humans.”

Microbiologist Yuen Kwok-yung, Ph.D., told reporters in China on Friday that he doesn’t know whether “in the future there will be a serious outbreak of the rat hepatitis E virus in Hong Kong.” He did confirm that, after studying the patient for the past year, it is clear that the patient contracted the virus, which is “highly divergent” from the strain that affects humans. In December, a study on this patient will be published in the journal Emerging Infectious Diseases.

Kwok-yung says he has no definitive explanation for how the virus was contracted, but he hypothesizes that the man could have accidentally eaten food contaminated with rat feces. Droppings had been found near the trash bins and floor where the patient was living, and the South China Morning Post reports that rats “as big as kittens” have been seen in Choi Wan Estate, the apartment units where the patient lives. For its part, the strain that affects humans is typically transmitted via the fecal-oral route, principally through contaminated water. Hepatitis E is most often found in areas with poor sanitation and limited access to clean water.

Kwok-yung theorizes that perhaps, “after a period of time, genetic changes of the virus in the rats were sufficient enough to infect a human.” Scientists have been studying how different forms of hepatitis morph to infect different animals for a long time: For example, in 2011 researchers discovered that dogs can be infected with a version of hepatitis B known as canine hepacivirus, which spreads through contaminated blood. The researchers theorize that canine hepacivirus and hepatitis B share a common ancestor that lived between 500 to 1,000 years ago, and its likely that the virus started in dogs then evolved into a human strain.

More time and research will tell whether rat hepatitis E evolved similarly. The good news is that the patient in Hong Kong is fine. His doctors stated that after he was treated with ribavirin, an antiviral medication for chronic hepatitis E infections, the issues with his liver functionality were resolved. According to the World Health Organization, China is also the only place in the world where you can receive a vaccine designed to prevent hepatitis E virus infection.

Now that you’ve read that, watch this:

More like this
Science
8.3.2022 3:44 PM
Ground-breaking technology restores dead organs back to a life-like state
By Miriam Fauzia
Science
8.6.2022 11:00 PM
Senior dogs could help us understand an incurable brain condition
By Lesley Evans Ogden and Knowable Magazine
Science
8.14.2022 1:00 PM
'Gifted' dogs may share this one personality trait. Does your dog have it?
By Tara Yarlagadda
Related Tags
Share: