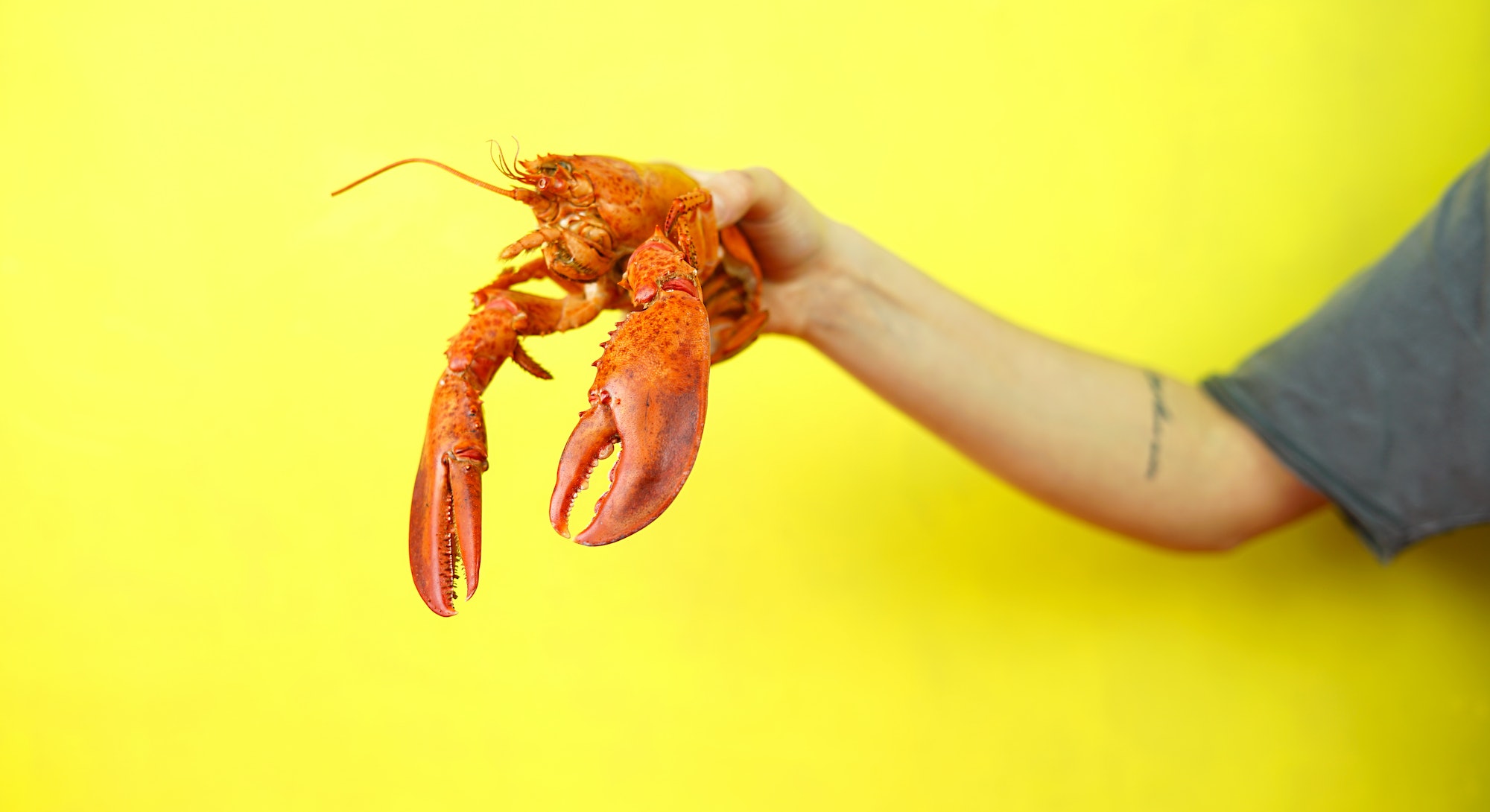 Boiled, grilled, and slathered in butter, a lobster is a foodie’s delight. But when a live lobster is brought home to be killed before consumption, it can pose an ethical conundrum that’s more headache than belly rub. Today, most people don’t kill their own food. So how do you kill a lobster?

In Southwest Harbor, Maine, Charlotte Gill of Charlotte’s Legendary Lobster Pound claims that marijuana helps ease a lobster’s death and thus the minds of those that eat it. While media attention over her “high-end” lobster raised concerns among the state’s health inspectors, Gill announced on Sunday on her restaurant’s website that her marijuana-exposed lobsters would go on sale to the public by mid to late October. Her treatment process, she told Maine’s WMTW, involves putting a lobster in a box with a few inches of water and then blowing marijuana smoke into it. She claims the “experiment” calms lobsters before they’re killed, emphasizing that “we are doing this out of compassion for the lobsters and THEIR well-being not our own.”

Potential legal issues aside, there’s one major problem with Gill’s plan. There is no evidence that lobsters can even get high from marijuana smoke, let alone find peace in the drug.

“I’m calling with extreme trepidation,” Rick Wahle, Ph.D., director of the Lobster Institute at the University of Maine, told Inverse when asked whether a lobster could get stoned. “The reason for my trepidation is that there’s a lot of uncertainty about how pain is even perceived by lobsters, and much less is known about how THC could affect them. It’s certainly an intriguing idea.”

Considering the lobster? Check out this video about how scientists and lobstermen are working together in Maine.

When a human gets high, the active molecules in marijuana — cannabinoids like tetrahydrocannabinol (THC) — bind the brain’s cannabinoid receptors. The chemical structure of THC is similar to that of the naturally occurring “bliss molecule” anandamide, which causes a little rush of dopamine when it binds a cannabinoid receptor. That similarity allows THC to trick the receptors into flooding the brain with dopamine, resulting in the feeling of being stoned.

Some scientists believe that the two cannabinoid receptors, CB1 and CB2, are present in lobsters, and a 1988 study of THC’s effect on the American lobster even found that THC can suppress the animal’s neuromuscular junction activity. But University of New Hampshire professor of zoology Win Watson, Ph.D. says that the presence of the cannabinoid receptors doesn’t necessarily mean marijuana affects lobsters in the same way as humans.

“It’s demonstrated that lobsters are very likely to have receptors for cannabinoids and thus they are likely to produce their own endogenous cannabinoids,” Watson tells Inverse. “It is certainly possible that lobsters could be influenced by cannabinoids, but there is no way to know how they would be affected at this point. Different drugs do different things to different animals.”

Whether or not lobsters even experience pain that requires placating is a whole other question. Scientists don’t even have a full grasp of how marijuana alleviates human pain — some think the drug masks the sensation but doesn’t actually reduce it — let alone a lobster’s pain. For one thing, their nervous systems are quite different than ours. While they also produce serotonin (which causes aggressiveness in lobsters) and have analogous neurons and neurotransmitters, their comparatively primitive brain is primarily a collection of ganglia, or nerve endings. Wahle says that you can’t call a lobster’s forward-most ganglion its brain because its functions are distributed among all its other ganglia.

“That reality also raises doubt to whether piercing them in the head would result in instant death or alleviate pain,” Wahle says, putting the nail on another would-be ethical means of murder.

It’s very hard to tell whether a lobster perceives pain because pain is a conscious experience of feeling and so far nobody has learned how to read a lobster’s mind. Experiments at Queen’s University, Belfast, however, have suggested that they might at least experience something like pain because they react reflexively to noxious stimuli. Anyone who has boiled a lobster knows that it will twitch when dropped in boiling water. That twitch, called the “escape response,” is thought to be a reflexive response to the sudden stimulus of boiling water. At Queen’s University, professor emeritus of biology Robert Elwood, Ph.D. has shown that other crustaceans, like crabs and prawns, will groom or rub the areas where they’re experimentally shocked or exposed to acetic acid, suggesting that something like pain might be occurring.

“These are not just reflexes,” Elwood told The Washington Post. “This is prolonged and complicated behavior, which clearly involves the central nervous system.”

But just because there’s a reflexive response doesn’t necessarily mean it’s a response to pain.

Scientists are only beginning to scratch the surface when it comes to understanding the brains and behaviors of invertebrates. But regardless of reflexive responses, no one can be 100 percent certain whether lobsters can feel pain.

“There is little doubt that most animals find certain dangerous stimuli aversive,” says Watson. “They don’t like it, and if given the chance, they will move away from it. But who knows how it ‘feels.’?”

Wahle agrees. “We can’t really say they perceive the way we do,” he explains. “That would be a bit anthropomorphic.”

Meanwhile, despite these questions of perception, the Swiss have decided that boiling lobsters alive is too unethical to be legal. In March 2018, boiling lobsters became an “act of animal cruelty.” Now, lobsters must be stunned or killed before they are boiled. Still, Wahle isn’t convinced that stunning a lobster makes things any easier.

“Maybe electroshock results in instantaneous death, but, to be honest, I’m not sure they have the evidence that it’s any less painful than boiling water,” he explains. “Which is almost instantaneous if you put them in quickly and the water is already boiling.”

For people dead-set on ensuring their lobster dies a good death, Watson and Wahle agree the gentlest method is to first place it in a refrigerator or freezer. The cold temperature brings their metabolic rate down, which is believed to dull their senses.

“They are cold blooded, so when you cool them down all their neural and physiological processes slow way down,” Watson says. “If they are cold enough, they might even have trouble conducting nerve impulses, which would certainly help with possible pain.”

Then, for a quick death, the lobster should then be boiled. When it’s lowered into boiling water, it will start to tail twitch within the first five to ten seconds and will stop moving about a minute in. The uneven temperatures involved in pot steaming, in contrast, could result in the lobsters at the top of the steam rack to still be alive after 20 minutes while their lower-positioned counterparts are dead, especially if many lobsters are being cooked at once. You can, by some accounts, also hypnotize a lobster by holding its head down and rubbing it.

What is far less certain is whether a lobster can get high. While the effect of marijuana on lobster has yet to be studied, Watson theorizes that the drug could even make things worse because cannabinoids interact with thermal receptors, which “might make them even more sensitive to boiling water.”

His best advice for those who feel bad about killing their lobsters? Choose a different meal to eat.