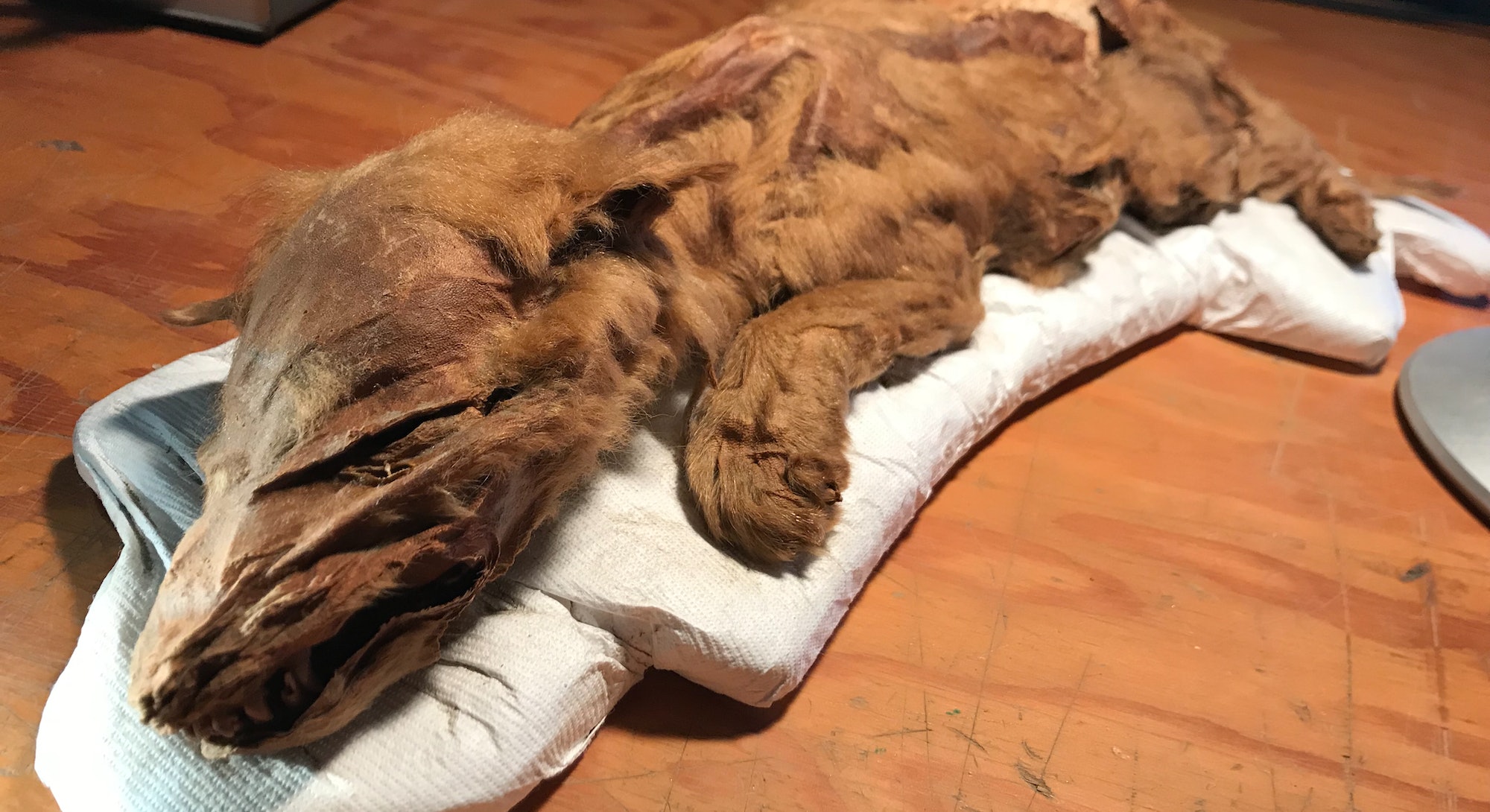 The cold, rocky Klondike region of Canada’s Yukon Territory is synonymous with gold, but in early September, scientists revealed a far more precious discovery: The perfectly preserved bodies of an ice age wolf pup and caribou calf, frozen intact for over 50,000 years.

Local miners unearthed the carcasses, the wolf pup still soft with fur, while digging for gold in 2016. A long-standing relationship between the miners and local scientists led to the bodies being shipped to the University of Ottawa, where they were carefully brought to room temperature and preserved. Then, they wound up back in front of Grant Zazula, Ph.D., a paleontologist with the Yukon government.

Zazula tells Inverse that the level of preservation of both bodies, given their ancient age, is remarkable.

“The miner, when he found the wolf pup, he thought, ‘Gee, it looks like a little dog that somehow got stuck in the permafrost’,” he says. “It looks like a taxidermied pet. It’s cute and tiny and has soft cuddly fur.”

“But the radiocarbon dating said they were older than 50,000 years old.”

Unlike in Siberia across the Bering Strait, where woolly mammoth and bison carcasses are discovered fairly often, it’s extremely rare to find intact ice age animals in the Yukon, says Zazula — especially those that are so well kept. In the photos, the frozen wolf pup, with its head, tail, paws, skin and fur intact, and the front half of the caribou calf, complete with skin, muscle, and hair, are certainly intriguing. But not nearly as much as what the bodies might tell us as about their descendants living today.

“It’s cute and tiny and has soft cuddly fur.”

The events that led to these rare, perfectly well-conserved corpses were likely rather sordid. For a body to be so well mummified it can last over 50,000 years, it needs to die fast and be buried quickly, before scavengers, bacteria, and the elements turn it to dust.

Siberia’s flat tundra was conducive to those kinds of deaths during the ice age, which is why we find so many well-kept corpses there. “Most of those mammoths were probably animals that were drinking from little ponds in the summer or slipped and had fallen in, so they were preserved right in place,” says Zazula.

But in the Yukon, the hilly terrain undulates into steep rocky outcrops, which likely caused more gruesome deaths. “Animals might have been dying on hill slopes, and their carcasses were washed into the bottom of the valleys,” Zazula explains. An unbroken body like the wolf’s or caribou’s suggests a more unusual, sudden death. In the case of the wolf pup, it might have been in its den while its mother went off to forage or hunt when the stones above it suddenly collapsed. With the caribou, it could have been caught in a landslide of silt.

As an expert in Yukon ice age paleontology with a career stretching back 20 years, imagining what life and death looked like 50,000 years ago is a big part of Zazula’s job.

What makes the ice age wolf pup and caribou so valuable to researchers like Zazula is that they can reveal how those ancient mammals are related to modern populations. “Ever since Friday, I’ve been getting requests from all kinds of genetics labs,” Zazula says.

So far, he and his team have only performed radiocarbon dating on snippets of skin from the bodies, which confirmed that they were over 50,000 years old. The limit of radiocarbon dating is 50,000 years, so these animals are truly ancient. The next step in his research will be genetic testing to show how the animals have changed over the years and how they migrated across the northern hemisphere during and after the ice age.

We all know what happened to the huge wooly mammoths and giant saber-toothed cats when the ice age ended. But, somewhat paradoxically, for the wolves and caribou, who still roam today, the story is much less clear. “What seems to happen at the end of the ice age is that their populations explode,” says Zazula. Did the Yukon animals merge with wolf packs and caribou herds from Siberia? Were some wiped out, only to be replaced with other populations?

“We don’t really know how to answer those questions about caribou and wolf because we’ve never actually studied them,” says Zazula. “These specimens will lead to those kinds of studies.”

For ice age paleontologists in the Yukon, where the metal-flecked mines are stingy with clues to the past, the unscathed baby wolf and caribou may as well be made of gold.

“Often when mummified carcasses are found in places like Siberia, we get jealous all the time!” says Zazula. “Another woolly mammoth in Siberia? Aw man. Another woolly rhinoceros in Siberia. They find these things all the time, at least every summer in Russia. They just don’t get found like that in North America.”

The next few years will likely involve the researchers getting up close and personal with the ancient bodies of the wolf pup and caribou calf. Cute as they seem, they are still, well, old — but Zazula isn’t worried about encountering anything too gross.

“It didn’t smell,” he laughs. “They were freeze dried.”