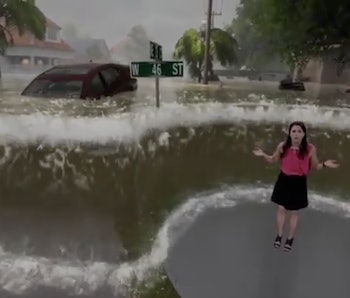 As the East Coast braced for Hurricane Florence to make landfall on Thursday, The Weather Channel captured the internet’s attention with a new mixed reality application that brought the projected storm surges to life. The video, viewed more than six million times by Friday afternoon, demonstrated the capacity for video game-like graphics to create a viral mixed reality weather report.

Nick Weinmiller, TWC creative director, tells Inverse that bringing these types of augmented reality reproductions to life on live television was a trial by fire involving technical prowess, teamwork, and speedy news delivery. The biggest change between the graphics in TWC’s video and the graphics we see in TV and film? This one was rendered in real time.

“So many challenges pop up when you’re trying to hit a shortened deadline. The graphics are very detailed and realistic, but that impacts performance,” he explains. “For example, if you don’t have good performance levels, then our camera operator would get stuttering and frame jumps as he moves around the scene, removing all sense of realism. Remember, this is all real-time special effects — there is no rendering and post-production, it is rendered live.”

Storm surge reports like this were only made possible a week ago, thanks to TWC’s newly constructed green screen studio. Unreal Engine — the same software that powers Fortnite — created the physically accurate water, wind, and floating car seen in the the report.

A TWC technical artist created the suburban environment on the graphical software, this was then sent to The Future Group — a Norwegian mixed reality tech company that partnered with the news channel in April — to make the graphics hyper-realistic. TWC then uses a specialized program to convert the graphics into a broadcast-ready format it uses to virtually line the walls of its green screen room.

Expect to see these videos a lot more. Now that Weinmiller and the team have hammered down this process they plan on using it in many more weather reports, from potential blizzard notices this winter to daily forecasts, and even climate change demonstrations.

“The problem for most people is digesting that information and relating it to themselves. That’s where these immersive experiences shine,” he says. “If we can get the viewer to picture themselves in these situations, instead of just seeing a map, then they start to understand and empathize with the situation.”

Tech analysts involved in mixed reality see even wider applications for this kind of technology. Josh Wolfe, the co-founder and managing director of venture capital firm Lux Capital, tells Inverse that he anticipates mixed reality will be adopted by an array of news organizations now that audiences, investors, and programmers alike have seen what it’s capable of. The news is often laden with numbers and facts that can be hard to grasp without the proper context. A new study revealing average flood lines in the year 2050, for example, could theoretically be illustrated in real time.

“A picture is worth a thousand words and a high-resolution 3D animated picture is worth a billion,” says Wolfe. “I think it’ll be adopted by anyone trying to report news. Now you can take somebody into the imagined here and now. Whether it’s a natural disaster, an accident, a medical breakthrough, reimagining a sports play, a military incursion, or even new technologies that don’t yet exist.”

He sees this as a natural progression of the freeze frame football replays on ESPN that transfix NFL fans, or the interactive touch screens used to to dissect election maps during political coverage. Both of these things supplement the expertise of a sports analysts or news reporter with visuals that make it clear exactly what they’re talking about. They not only capture attention, but further understanding.

Of course, Wolfe also sees the potential for misuse. Just as legitimate news organizations embrace this tool to break down facts and explain possible outcomes, malicious actors could also create misleading or false simulations. The same technology that created Fortnite and the viral TWC surge report could be tweaked to spread fake stories of an attacks or protest to insight havoc.

“The important thing here is using alternate realities to do good,” he says. “Tech is indifferent, it depends on who’s using it.”