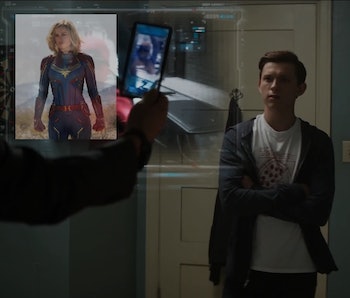 By now everybody knows that Captain Marvel takes place at some point during the ‘90s, but one compelling new fan theory posits that the exact timing of her story in the MCU timeline was actually teased during a throwaway line in Captain America: Civil War.

On Thursday, redditor Captaindeadpool172 posted a new Captain Marvel fan theory on the /r/FanTheories subreddit, writing about a throwaway line from Captain America: Civil War, when Tony Stark recruits Peter Parker’s Spider-Man. Stark projects YouTube videos of Spider-Man stopping a moving vehicle into the room. Peter makes excuses, saying, “You know that’s all fake? It’s all done on the computer. It’s like that video —“ That’s when Tony says, “Yeah, yeah, yeah. Oh, you mean like those UFOs over Phoenix?” We easily gloss right over the comment, especially when Tony finds Peter’s Spider-Man suit a half-second later.

Here’s that scene from Civil War for a refresher, with the quote right around the 0:50 mark.

Tons of plot details for Captain Marvel have emerged in the past week indicating that some action might indeed happen in the southwestern United States, and the supposed timeline of the movie does probably match up.

It’s unclear what role the Kree might play in the action that takes place on Earth during Captain Marvel, but the shapeshifting Skrulls will definitely invade our planet in some capacity. It also seems like Carol Danvers leaves Earth to team up with Starforce early in the movie, wearing a green and blue suit. (This could be in the early- or mid-‘90s.) She doesn’t return to Earth to combat the Skrulls until later on — which could very well be circa 1997 — and that’s when she sports the classic Captain Marvel costume in red, blue, and gold.

Based on the one image from the film in which Carol wears her suit on Earth, the terrain definitely looks like it could be around Phoenix, Arizona. Is there some epic final battle that happens there during Captain America that explains the Phoenix Lights phenomenon? Maybe!

In the real world, the Phoenix Lights was an unexplained phenomenon of lights appearing in the sky over Phoenix in 1997, which led many people to assume that extraterrestrials were flying around. Tony’s line confirms the same thing happened in the MCU, and it’s entirely possible that Carol’s activities in the ‘90s might explain what really happened.

Captain Marvel will be released in theaters March 8, 2019.